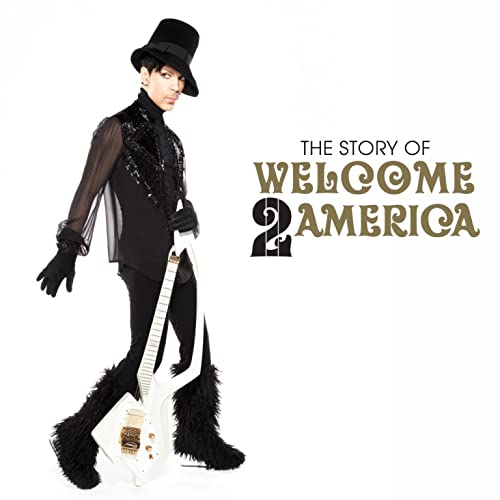 The Prince Estate, in partnership with Legacy Recordings and Sony Music Entertainment, today announced the new season of the Official Prince Podcast, The Story of Welcome 2 America, which will debut Thursday, July 22. The new season explores Prince’s career in 2010-2011, as the artist recorded his prescient and political album Welcome 2 America and then mysteriously archived it and will offer listeners the first chance to hear the songs on the album ahead of its official release.

The popular and award-winning Official Prince Podcast was just honored with two additional Webby Awards nominations for its 8-part series The Story of Sign O’ The Times and was both the People’s Voice Winner and the Webby Winner in Podcasts, Music Arts & Culture last month.

Hosted by music journalist Andrea Swensson and special guest co-hosts Shelby J. and Morris Hayes of Prince’s legendary band the NPG, the four-episode season will take listeners into the studios of Paisley Park and out onto the road to learn more about this prescient and philosophical period of Prince’s later-era career. The hosts will be joined by the additional musicians who performed on Welcome 2 America—Tal Wilkenfeld, Chris Coleman, Elisa Fiorillo, and Liv Warfield—plus important behind-the-scenes collaborators from the era who will shed light on Prince’s creative process and late-night conversations.

In addition to hearing the stories behind the singles “Welcome 2 America” and “Born 2 Die,” listeners will get the opportunity to hear numerous unreleased vault tracks including “Same Page, Different Book,” “Check the Record,” “1000 Light Years From Here,” “1010 (Rin Tin Tin)” and “Stand Up and B Strong” for the very first time.

Click here to listen to the preview for The Story of Welcome 2 America. The first episode will be available on Thursday July 22 on all major podcast platforms, including Apple Podcasts, Spotify and Stitcher.

About Prince Official Podcast: The official podcast dedicated to Prince, the singular artist and visionary. Featuring explorations of Prince’s massive discography and new discoveries from his legendary vault of unreleased recordings, each podcast episode features unforgettable anecdotes and insights from his trusted collaborators. Brought to you by The Prince Estate, which passionately presents Prince’s life and work and aims to immerse fans, old and new, in Prince’s story.

Legacy Recordings, the catalog division of Sony Music Entertainment, is home to the world’s foremost library of historically significant commercial recordings, a peerless collection of works by the most important musical artists of the 19th, 20th and 21st centuries.  Across a variety of platforms, the label offers contemporary music fans access to thousands of meticulously restored archival titles representing virtually every musical genre.

About Sony Music Podcasts: Sony Music Podcasts is a division of Sony Music Entertainment, a global leader in audio at the intersection of music, podcasting, entertainment and technology. Through our diverse global partnerships with leading creators and our team of sales, marketing and business development professionals, Sony Music Podcasts uses our core strengths to help the podcast community achieve greater levels of success. In alignment with our creator-first philosophy, we drive impactful storytelling through compelling content everywhere.