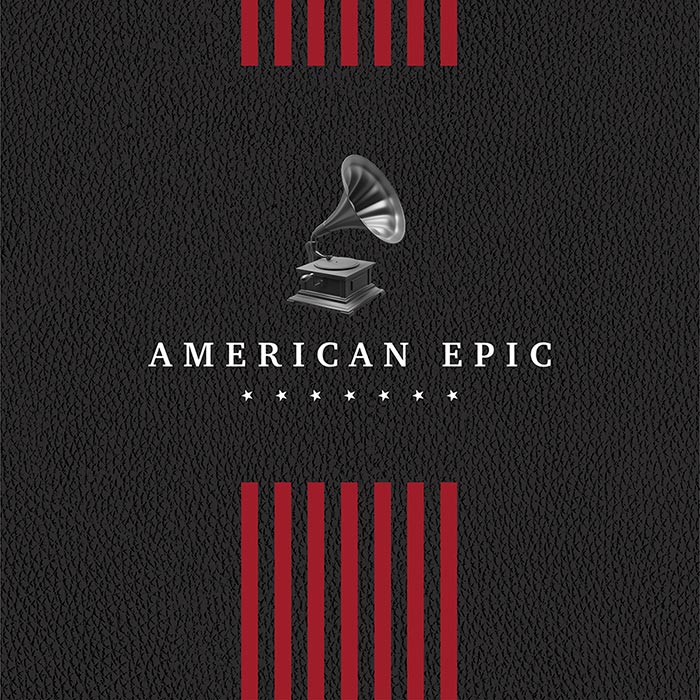 AMERICAN EPIC: THE SESSIONS OUT JUNE 9 ON COLUMBIA RECORDS

VINYL TO BE RELEASED BY THIRD MAN RECORDS

AMERICAN EPIC: The Collection and AMERICAN EPIC: The Soundtrack–each available digitally or as physical product–lead the way for a series of releases of music associated with the film series AMERICAN EPIC, produced by Allison McGourty, Duke Erikson and Directed by Bernard MacMahon, premiering in the U.S. on PBS on Tuesdays May 16, 23 and 30 at 9 p.m. (check local listings) and in the U.K. on BBC in May.

The AMERICAN EPIC historical documentaries are a journey back in time to the “Big Bang” of modern popular music.

In the 1920s, as radio took over the pop music business, record companies were forced to leave their studios in major cities in search of new styles and markets. Ranging the mountains, prairies, rural villages, and urban ghettos of America, they discovered a wealth of unexpected talent. The recordings they made of all the ethnic groups of America democratized the nation and gave a voice to everyone. Country singers in the Appalachians, Blues guitarists in the Mississippi Delta, Gospel preachers across the south, Cajun fiddlers in Louisiana, Tejano groups from the Texas Mexico border, Native American drummers in Arizona, and Hawaiian musicians were all recorded. For the first time, a woman picking cotton in Mississippi, a coalminer in Virginia or a tobacco farmer in Tennessee could have their thoughts and feelings heard on records played in living rooms across the country. It was the first time America heard itself.

AMERICAN EPIC: The Collection gathers 100 of these original recordings from the 1920s and 1930s in one five-disc set, restored to unprecedented levels of sonic fidelity. For these releases, compiled by Director Bernard MacMahon, engineer Nicholas Bergh refined a transfer process using a mix of both modern and vintage equipment in order to extract the remarkable resolution from the records that is often missed. This ‘reverse engineering’ approach to the transfer process enabled the restoration team of Grammy Award-winning engineer Peter Henderson, Duke Erikson and Joel Tefteller to get the resulting audio closer to the original performance than ever before.

This is not “remastering,” in the normal sense, but something closer to fine art restoration. The intent is not for people to marvel at the antiquity of these discs, but rather to experience them as vital, immediate performances that speak to us as directly as they did on the day they were recorded—not simply great art for their time, but great art for all times. It includes a 100-page book filled with stunning unpublished photographs, quotes from the artists, their friends and families, lyrics for every song, essays and recording notes. Among the artists included are Mississippi John Hurt, The Carter Family, Charley Patton, Jimmie Rodgers, Lydia Mendoza, Nelstone’s Hawaiians, Big Chief Henry’s String Band, Robert Johnson and many others.

AMERICAN EPIC: The Soundtrack, is a 15 song single disc anthology of songs featured in the AMERICAN EPIC film trilogy. Compiled by Lo-Max Records, it includes restored archival recordings from artists such as Memphis Jug Band, The Carter Family, Charley Patton, Joseph Falcon, Lydia Mendoza and others.

Columbia Records will release AMERICAN EPIC: The Sessions the soundtrack to “THE AMERICAN EPIC SESSIONS” directed by Bernard MacMahon. In “THE AMERICAN EPIC SESSIONS,” the team has reassembled the very first electrical sound recording system from the 1920s, and invited Jack White and T Bone Burnett to produce an album of recordings by twenty of today’s greatest artists. In this beautifully filmed musical feature, these artists are given the chance to pass through the portal that brought the world into the modern era.

Engineer Nicholas Bergh has reassembled this recording system from original parts and it is now the only one left in the world. The system consists of a single microphone, a towering six-foot amplifier rack, and a live record-cutting lathe, powered by a weight-driven pulley system of clockwork gears. The musicians have roughly three minutes to record their song direct to disc before the weight hits the floor. In the 1920s, they called this “catching lightning in a bottle.” All the musical performances in this film are live. The audio you hear on the soundtrack is taken directly from the discs they were recorded to, with no editing or enhancements.

AMERICAN EPIC represents a ten-year odyssey undertaken by director Bernard MacMahon and producers Allison McGourty and Duke Erikson, and audio engineer Nicholas Bergh that involved tracking down countless long forgotten musicians, restoring the music that they recorded and reassembling the technology that created it. Along the way they brought some of the most important figures in contemporary culture to help them on their quest. Executive Producers Jack White, T Bone Burnett and Robert Redford have lent their support to what Redford calls “America’s greatest untold story”.

“The extraordinary music that is the American Epic collection is a reflection of virtually everything we listen to today,” said Adam Block, President, Legacy Recordings. “In their breadth of style and subject matter these songs, so meticulously restored, deliberately curated, and then lovingly recreated for the Sessions set, are a glorious reflection and celebration of the greatest characteristic of this nation:  our magnificent diversity.”

The companion book, AMERICAN EPIC, will be available May 2 from Touchstone. Bernard MacMahon and Allison McGourty’s fascinating account, written with the assistance of prize-winning author Elijah Wald, continues the journey of the series with a behind-the-scenes look at the incredible journey across America searching for these recordings and eyewitness accounts. It features additional stories, exclusive never-before-seen photographs, and unearthed artwork. It also contains contributions from many of the musicians who participated, including Taj Mahal, Nas, Willie Nelson, and Steve Martin all of which will reveal a new understanding of America to the world and future generations.

AMERICAN EPIC will be available on Blu-ray and DVD on June 13 from PBS Distribution; visit shopPBS.org or call 800-PLAY-PBS, 24 hours a day, 7 days a week. The series will also be available for digital download.

PBS International, the co-production and distribution arm of PBS Distribution, is distributing AMERICAN to broadcasters and media companies worldwide. Several international broadcasters including BBC (United Kingdom), ARTE/ZDF (France and Germany), Canal Plus (Spain), and Channel 8 (Israel) have already signed on to air the film in their territories.

For more information on the overall initiative visit www.americanepic.com. For information specifically about the documentary series and recording studio film visit www.pbs.org/americanepic. The social media hashtag is #AmericanEpic.

About PBS
PBS, with its over 350 member stations, offers all Americans the opportunity to explore new ideas and new worlds through television and online content. Each month, PBS reaches nearly 103 million people through television and over 33million people online, inviting them to experience the worlds of science, history, nature and public affairs; to hear diverse viewpoints; and to take front row seats to world-class drama and performances. PBS’ broad array of programs has been consistently honored by the industry’s most coveted award competitions. Teachers of children from pre-K through 12th grade turn to PBS for digital content and services that help bring classroom lessons to life. PBS’ premier children’s TV programming and its website, pbskids.org, are parents’ and teachers’ most trusted partners in inspiring and nurturing curiosity and love of learning in children. More information about PBS is available at www.pbs.org, one of the leading dot-org websites on the Internet, or by following PBS on Twitter, Facebook or through our apps for mobile devices. Specific program information and updates for press are available at pbs.org/pressroom or by following PBS PressRoom on Twitter.

About BBC Arena
Celebrating its 40th anniversary this year, Arena is the world’s longest running arts documentary strand. Anthony Wall has been a director since 1978 and series editor, succeeding Alan Yentob, since 1985. Arena is dedicated to arts and culture high and low, from Visconti to Hip Hop, from Dylan and The Beatles to Nelson Mandela. In 2000, Arena was given the Special Medallion at the Telluride Film Festival for its contribution to “cutting edge film making”. It was there that Werner Herzog, a fellow medallion recipient, declared Arena to be “the oasis in the sea of insanity that is television.” Other awards include the Prix Italia, Primetime and International Emmys, the Peabody, nine BAFTAS and twenty-five nominations, six Royal Television Society awards and numerous honors from all over the globe.

About Lo-Max Films
Lo-Max Films, founded by Allison McGourty, Bernard MacMahon and Duke Erikson is an award winning film and music Production Company. It handles the direction, editing and music composition for the American Epic series. It has compiled the music releases and developed, with Nicholas Bergh at Endpoint Audio Labs and Grammy Award winning audio engineer Peter Henderson, the innovative audio transfers and restoration on the archival titles.

About Third Man Records
Third Man Records was launched by Jack White in Detroit, MI in 2001, and in 2009 opened its current Nashville, TN location which houses a record store, novelties lounge (featuring the Third Man Record Booth), label offices and distribution center, photo studio, and the world’s only live venue with direct-to-acetate recording capabilities. Third Man is an innovator in the world of vinyl records and a boundary pusher in the world of recorded music, aiming to bring tangibility and spontaneity back into the record business and issue releases that leave no doubt in the minds of listeners that music is indeed sacred. The American Epic vinyl releases will be pressed in Third Man’s brand new state-of-the-art pressing plant in Detroit, MI.