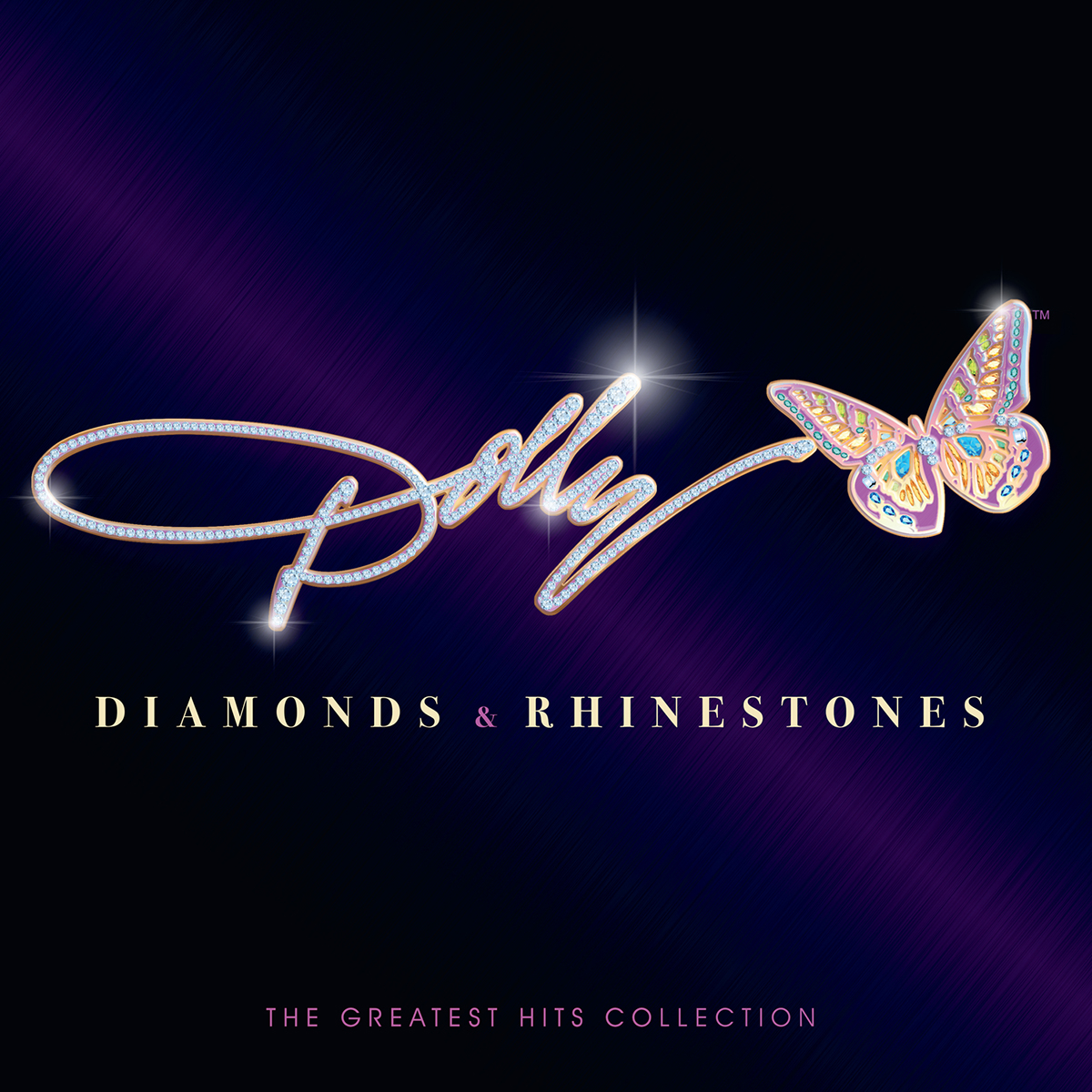 Available in digital, CD (in softpak with booklet) and 2LP 12″ vinyl (in gatefold with printed sleeves) configurations, Dolly Parton – Diamonds & Rhinestones: The Greatest Hits Collection may be pre-ordered HERE.

A cross-label anthology, Dolly Parton – Diamonds & Rhinestones: The Greatest Hits Collection brings together, for the first time on one album, recordings originally released on Dolly Records, RCA Victor and Columbia Records, as well as the Butterfly Records digital single, “When Life Is Good Again,” written and recorded in 2020 as Dolly’s musical message of hope to fans as the pandemic rolled in.

Gems on Diamonds & Rhinestones include Dolly’s performances with Kenny Rogers (“Islands in the Stream” and “Real Love”), Loretta Lynn and Tammy Wynette (“Silver Threads and Golden Needles” from Honky Tonk Angels) and “Faith,” her delightfully surprising 2020 collaboration with the Swedish electropop dance duo Galantis (featuring Mr. Probz). The album features songs from Dolly’s films including “9 To 5” (from 1980’s 9 To 5 And Odd Jobs), “Red Shoes” (from 2018’s Dumplin’) and “Tennessee Homesick Blues” from 1984’s Rhinestone).

In a note to her fans, Dolly wrote, “Every one of these songs has a special memory behind it for me. I hope that you make some special memories of your own while listening to them. Enjoy the Diamonds & Rhinestones album. – Musically yours, Dolly”

On May 4, the Rock & Roll Hall of Fame announced that Dolly Parton was one of its 2022 Inductees in the Performer Category honoring “artists who have created music whose originality, impact, and influence has changed the course of rock & roll.” The 37th Annual Rock & Roll Hall of Fame Induction Ceremony is scheduled to take place at Microsoft Theater in Los Angeles, California on November 5.

Dolly Parton is the most honored and revered female country singer-songwriter of all time. Achieving 25 RIAA-certified gold, platinum, and multi-platinum awards, she has had 26 songs reach #1 on the Billboard country charts, a record for a female artist. Recently, Parton reached #1 on the Billboard Christian Airplay Chart for the first time for her duet with Grammy award-winning Zach Williams of “There Was Jesus,” for which they won a Grammy that year, making that her 11th Grammy win.   She received her first Dove Award for short form video for her collaboration with for King & Country on the song “God Only Knows.” Parton is the first artist to have topped the Billboard’s Adult Contemporary, Christian AC Songs, Hot Country Songs, Christian Airplay, Country Airplay and Dance/Mix Show Airplay radio charts. Parton recently became the first country artist honored as Grammy MusiCares Person of the Year given out by NARAS. She has 47 career Top 10 country albums, a record for any artist, and 110 career-charted singles over the past 50+ years.

In 2014 the RIAA recognized her impact on recorded music with a plaque commemorating more than 100 million units sold worldwide. Her 2016 #1 album, “Pure & Simple,” which topped the Billboard Top Country Albums and Americana/Folk Albums charts and debuted at No. 1 in the U.S., Canada, U.K. and Australia, added to that massive tally. She has garnered eleven Grammy Awards and 51 nominations, including the Lifetime Achievement Award and a 2020 win with for KING & COUNTRY for their collaboration on “God Only Knows”; 10 Country Music Association Awards, including Entertainer of the Year; five Academy of Country Music Awards, also including a nod for Entertainer of the Year; four People’s Choice Awards; and three American Music Awards. In 1999, Parton was inducted as a member of the coveted Country Music Hall of Fame.

In 2020, she released the Christmas album “A Holly Dolly Christmas” which went #1 on the Billboard Country and Holiday charts, as well released the bestselling coffee table book “Songteller: My Life in Lyrics.”  In 2021, she won an Emmy Award for Outstanding Television Movie for the film “Dolly Parton’s Christmas on the Square” and this December 2022, she will be releasing on NBC an all-new original holiday movie called “Dolly Parton’s Mountain Magic Christmas” which she is starring in as well as producing.

To date, Parton has donated over 184 million books to children around the world with her Imagination Library. Her children’s book, Coat of Many Colors, was dedicated to the Library of Congress to honor the Imagination Library’s 100 millionth book donation. In March of 2022, Parton released the book Run Rose Run which she co-authored with James Patterson which sat at # 1 on the New York Times Bestseller’s List for 5 weeks, a record for this decade.  She also released an accompanying album of the same name with original songs inspired by the book which reached #1 on three charts simultaneously — Country, Americana/Folk and Bluegrass Albums.  From her “Coat of Many Colors” while working “9 to 5,” no dream is too big and no mountain too high for the country girl who turned the world into her stage.