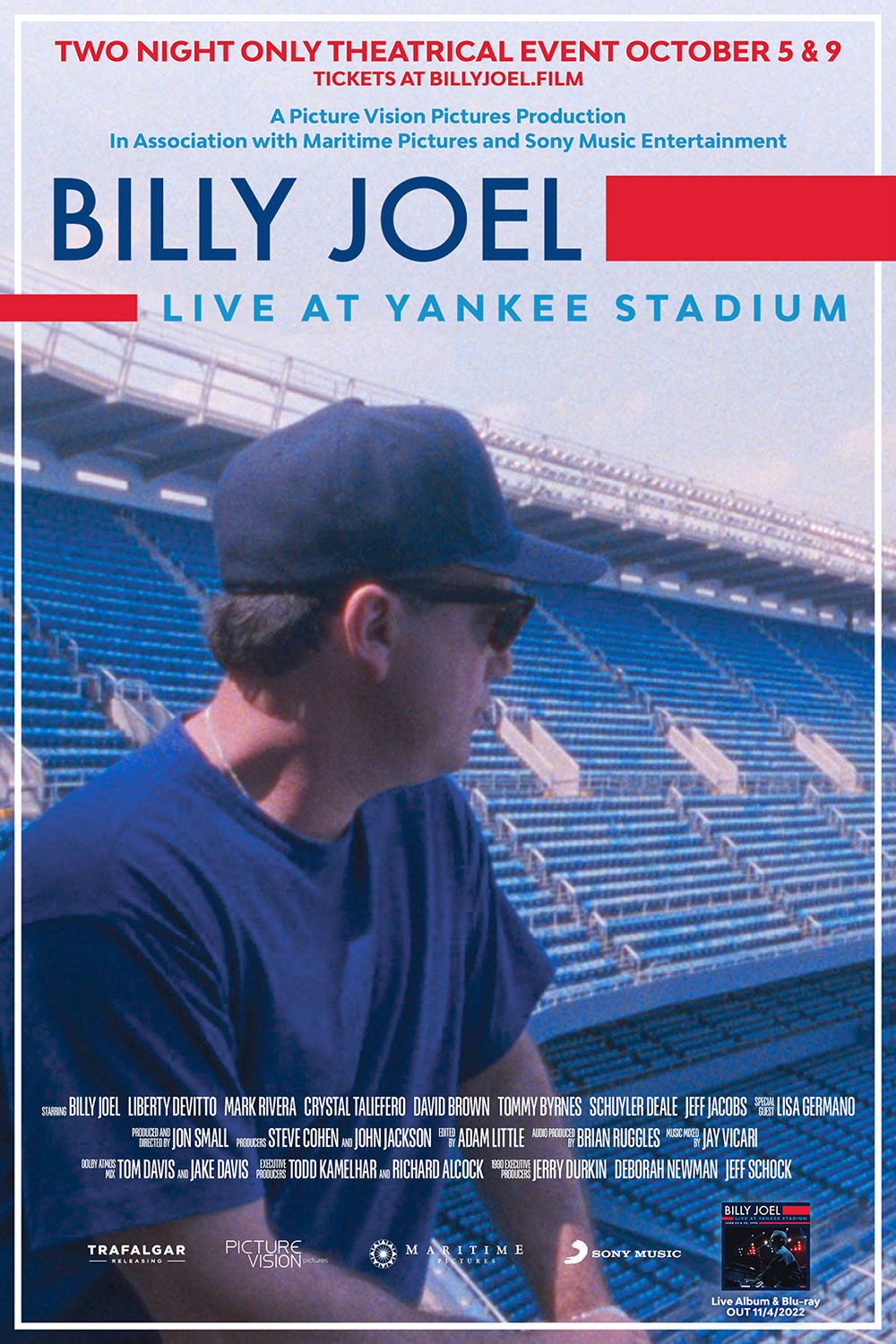 New Clip of ‘We Didn’t Start The Fire’ Available at https://billyjoel.lnk.to/WDSTF

In celebration of 50 years of Billy Joel, one of the most iconic concert films of all time, “Live At Yankee Stadium,” is coming to cinemas for a special two-night global fan event.  Shot live on 16mm color film on June 22 and 23, 1990, at the iconic Bronx stadium, the original concert has been re-edited in stunning 4K with Dolby ATMOS® audio^ and newly mixed from the original multi-track tapes by Jay Vicari and overseen by Billy’s long time sound engineer Brian Ruggle. The new version includes a never-before-released performance of “Uptown Girl,” interviews with Billy Joel, and behind-the-scenes footage from the event’s production. The hit-filled set list also includes “Piano Man,” “We Didn’t Start The Fire,” “New York State Of Mind,” “Scenes From An Italian Restaurant,” “Shout,” and more.

“We’re pleased to partner again with Sony Music Entertainment to bring another classic rock n’ roll concert to the big screen,” said Marc Allenby, CEO of Trafalgar Releasing. “This re-edited concert is going to have fans of Billy Joel dancing in their seats in movie theaters worldwide.”

“As a native New Yorker, Billy Joel’s iconic performance at Yankee Stadium is a perfect combination for audiences. We are excited to give fans the opportunity to watch this sold-out concert and rock out to the legend’s greatest hits,” said Tom Mackay, President, Premium Content, Sony Music Entertainment.

New York’s quintessential son, Billy Joel, ranks as one of the most popular recording artists and respected entertainers in history. The singer/songwriter/composer is the sixth best-selling recording artist of all time, the third best-selling solo artist as well as one of the biggest concert draws in the world. Joel’s songs have acted as personal and cultural touchstones for millions of people across five decades.

Having sold 160 million records over the past quarter century, the hits have continued for almost five decades, scoring 33 consecutive Top 40 hits. Joel has received the RIAA’s Diamond Award twice for Greatest Hits Volume I & Volume II and The Stranger, presented for albums that have sold over 10 million copies. He is the recipient of 23 GRAMMY® nominations and six GRAMMY® Awards, including the prestigious Grammy Legend Award.  Joel has been inducted into the Rock & Roll Hall of Fame, the Songwriter’s Hall of Fame, and has received numerous awards including a TONY Award for “Movin’ Out,” The Library of Congress Gershwin Prize for Popular Song, the once-in-a-century ASCAP Centennial Award. Additionally, he is a Kennedy Center honoree and has received a star on the Hollywood Walk of Fame.

Columbia Records and Legacy Recordings, the catalog division of Sony Music Entertainment, will release Billy Joel Live at Yankee Stadium in Digital, 2CD, 3LP and Blu-ray formats on November 4 and may be pre-ordered now https://billyjoel.lnk.to/LiveAtYankeeStadiumLW.

ABOUT TRAFALGAR RELEASING:
Trafalgar Releasing is the global leader in event cinema distribution. A subsidiary of Trafalgar Entertainment, Trafalgar Releasing’s global operations include production, acquisition, marketing and distribution of specialized content to over 8,000 cinemas in more than 120 countries worldwide.

More information about Trafalgar Releasing can be found at www.trafalgar-releasing.com.

About Sony Music Entertainment Premium Content:
Sony Music Entertainment’s (SME) Premium Content division is a full-service content development studio showcasing the Company’s global legacy, scale and robust offerings for top creative talent around the world. Designed to provide our artists and creators with unique opportunities to captivate new global audiences, the team develops, produces, and distributes a range of premium projects across film, television, podcasting, gaming and more. Tapping into SME’s vast portfolio and catalog libraries, the division champions innovative ideas and collaborations across the Sony entertainment companies to amplify our artists’ creative vision and engage fans with captivating content across all formats.