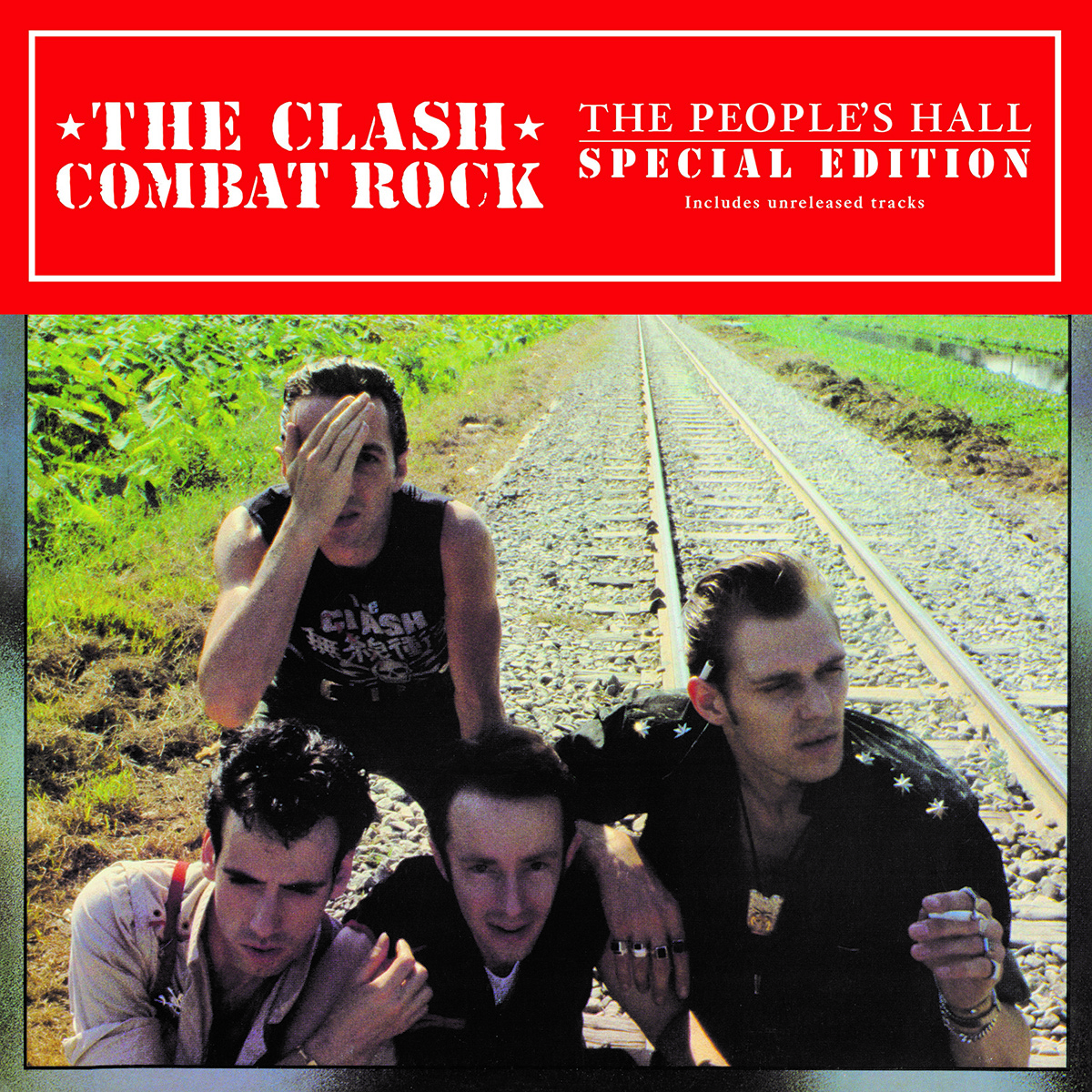 ** THIS IS A PUBLIC SERVICE ANNOUNCEMENT…. WITH GUITARS! **

PREVIOUSLY UNRELEASED COLLABS WITH RANKING ROGER ON ‘ROCK THE CASBAH’ AND ‘RED ANGEL DRAGNET’ WILL BE AVAILABLE DIGITALLY ON 6TH APRIL & LATER AS A LIMITED 7-INCH VINYL.

“‘Combat Rock’ is as wrapped up with world events of the day as it is spectacularly still relevant.” – Pitchfork (2021)

Originally released in May 1982, ‘Combat Rock’ is the final album from The Clash of Joe Strummer, Mick Jones, Paul Simonon and Topper Headon. Featuring two of the band’s most well-known songs, ‘Should I Stay Or Should I Go’ and ‘Rock The Casbah’, plus favourites ‘Straight To Hell’ and ‘Know Your Rights’, it is both their biggest selling album and highest charting set in both the UK and US.

Now comes a special edition of the album, titled ‘Combat Rock / The People’s Hall’, which will be released on May 20th. It couples the album with an additional 12-tracks compiled by The Clash.

Having returned to London following their pivotal 17-show residency at New York’s Bond’s Casino in 1981, the band rehearsed and recorded at The People’s Hall in the squatted Republic of Frestonia near Latimer Road in London and from there they embarked on a tour of the East and South East Asia, during which the album sleeve image was captured by Pennie Smith in Thailand.

The tracks on ‘The People’s Hall’ chart the period from what was their last single Radio Clash right up to the release of Combat Rock, including unheard, rare and early versions of tracks.

The disc highlights a new version of ‘Know Your Rights’ which was recorded at The People’s Hall on the Rolling Stones Mobile Studio, and the previously unreleased instrumental ‘He Who Dares Or Is Tired’. Other notable tracks include ‘Futura 2000’, an unreleased original mix of ‘The Escapades of Futura 2000’, Mikey Dread’s ‘Radio One’, and the outtakes ‘The Fulham Connection’, previously known as ‘The Beautiful People Are Ugly Too’ as well as ‘Idle in Kangaroo Court’.

‘Combat Rock’ is indicative of The Clash’s constant evolution and was influenced in part by the relatively recent end of the Vietnam War, particularly on ‘Sean Flynn’, inspired by the disappearance of the photojournalist and film star’s son. The band’s curiosity and range is illustrated by the many styles and voices here, notably poet Allen Ginsberg’s apocalyptic spoken word on ‘Ghetto Defendant’and graffiti artist Futura’s rap on ‘Overpowered By Funk’.

The Clash’s influence on punk, post-punk and indie rock is well documented and ‘Combat Rock’ specifically continues to inspire waves of rediscovery from new audiences, most notably with the use of ‘Should I Stay Or Should I Go’ as a prominent plot device in the first season of the Netflix smash ‘Stranger Things’. Meanwhile, ‘Straight To Hell’ remains instantly recognisable having been used in ‘Paper Planes’ by M.I.A.

‘Combat Rock / The People’s Hall’ is now available to pre-order HERE. It will be released on double-CD, triple-vinyl and digital formats.

In addition, The Clash’s collaborations with the late Ranking Roger will receive their first ever official release within a separate two-track EP. It finds the legendary frontman of The Beat infusing ‘Red Angel Dragnet’ and ‘Rock The Casbah’ with his exuberant, high-energy toasting. The EP will be available digitally from 6th April, with a limited edition 7” vinyl following on 20th May. LISTEN HERE.