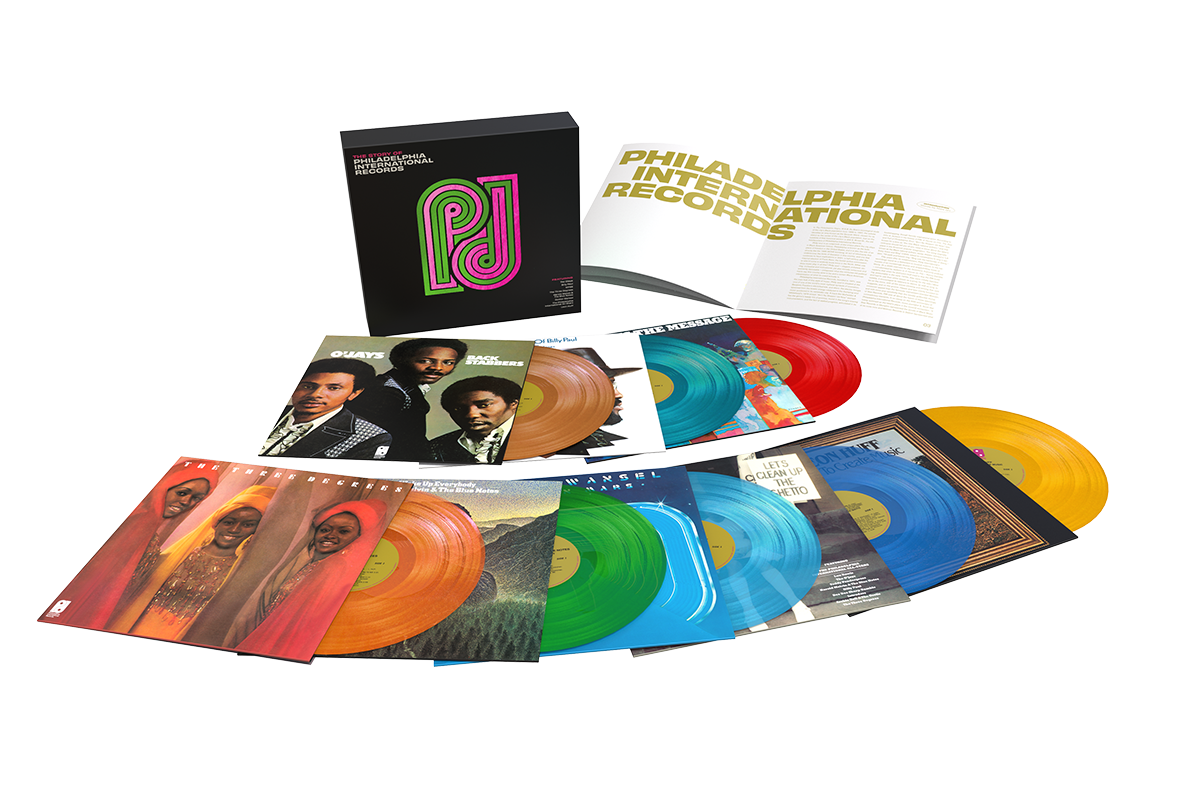 Vinyl Me, Please (VMP) – in partnership with Legacy Recordings, the catalog division of Sony Music Entertainment – today announces VMP Anthology: The Story of Philadelphia International Records,in celebration of the 50th anniversary of the label that put Philadelphia on the map as an authority and influence on soul, R&B, gospel and doo-wop music. This exclusive, limited-edition vinyl box set takes listeners on an immersive experience through the rapid come-up of one of the most game-changing, genre-shaking institutions in the history of soul and R&B.

VMP Anthology: The Story of Philadelphia International Records is made up of eight records, selected by VMP to encapsulate the label’s lightning peak throughout the 70s. Each record was lacquered and AAA-mastered directly from tapes to prioritize the quality and warmth of the albums’ sound, and cut, plated, and pressed on high-quality 180g color vinyl at RTI. The first edition of this commemorative Anthology is limited to just 1,000 pressings and is accompanied by an original 26-page Listening Notes and photo booklet written by Niela Orr to tell the story of the label and its cultural impact. The Anthology also comes with a four-episode podcast series to serve as a definitive guide to each album featuring interviews with PIR’s key figures like Kenny Gamble, Leon Huff, Valerie Holiday and more.

To add to the 50th anniversary celebration, VMP will also feature Teddy Pendergrass’ seminal album Life Is a Song Worth Singing in its Classics subscription during the month of October. Sign-ups for this Record of the Month will open on September 23rd.

“It’s a true honor to be able to champion Philadelphia International, and to give their music the VMP Anthology treatment. PIR is a groundbreaking powerhouse of a label whose impact — both directly and indirectly — can be seen and heard prominently in music and culture to this day, 50 years later,” said Amileah Sutliff, VMP’s Head of Editorial. “With eight incredible albums that illustrate the label’s vast contributions to soul throughout the ’70s, listeners get to go deep on a catalogue that single-handedly established the Sounds of Philadelphia.”

Vinyl Me, Please (VMP) is a community of explorers and storytellers who navigate between sounds that are lost and found to create transcendent tangible music experiences. VMP offers customers four different monthly vinyl subscriptions (Essentials, Classics, Hip Hop, and Country), an online record store with exclusive pressings, and a multitude of editorial content, storytelling, and events. Through these offerings we embark on explorations of familiar sounds from our past, and new sounds for our future. To learn more, visit vinylmeplease.com and follow @vinylmeplease on socials.

The groundbreaking label, founded in 1971 by innovative and prolific songwriters/producers Kenneth Gamble and Leon Huff, became the birthplace, incubator and launching pad for the sophisticated Philly Soul sound also known as “The Sound of Philadelphia.” The duo amassed an extraordinary array of producers, songwriters, musicians and engineers including Thom Bell, Dexter Wansel, Bobby Martin, MFSB, Joe Tarsia and more to help craft some of the most memorable lyrics and melodies of the past five decades. The legendary roster of music stars who helped bring these chart-topping disco, R&B, soul and funk sounds to life included The O’Jays, Patti LaBelle, Harold Melvin & the Blue Notes, Billy Paul, Teddy Pendergrass, Lou Rawls, McFadden & Whitehead, The Three Degrees, Phyllis Hyman, The Intruders, the ultimate “house band” MFSB, and many others.