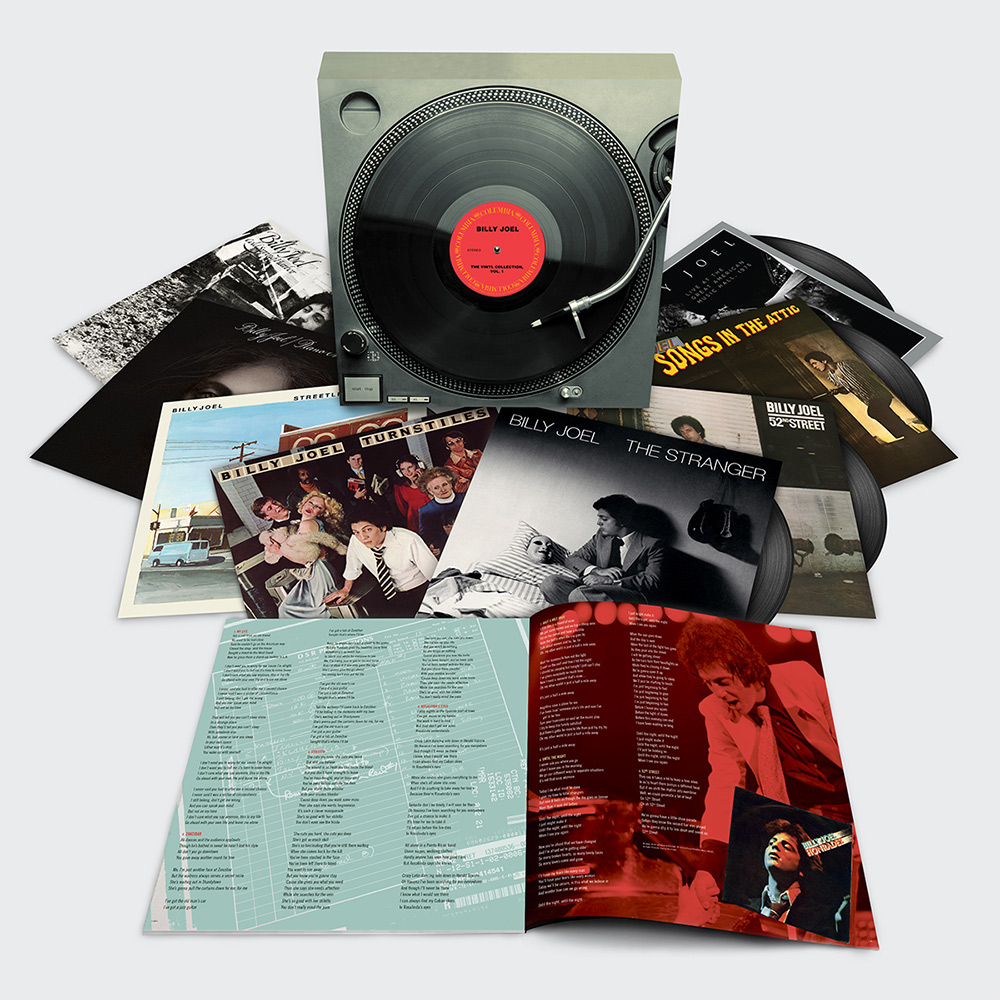 Columbia Records and Legacy Recordings, the catalog division of Sony Music Entertainment, will release Billy Joel – The Vinyl Collection, Vol.1 on November 5, kicking off a celebration of the legendary musician’s 50 years of artistry.

A definitive 9LP library chronicling Billy Joel’s evolution as a songwriter, performer and recording artist during his rise from obscurity to international superstardom in the 1970s, The Vinyl Collection, Vol. 1 brings together the artist’s first six solo studio albums (Cold Spring Harbor, Piano Man, Streetlife Serenade, Turnstiles, The Stranger, 52nd Street) with his first live album (Songs in the Attic) and an exclusive pressing of Live at The Great American Music Hall – 1975, a previously unreleased concert recording available for the first time in the boxset as a double 12″ vinyl album. All titles have been sourced from the original album tapes and prepared by Ted Jensen at Sterling Sound. The boxset includes a 50+ page booklet highlighting Billy’s early career through archival photos, an essay by Anthony DeCurtis, Billy’s personal observations and insights on his songs and albums, and tributes from his fellow musicians, artists and celebrities.

Live at The Great American Music Hall -1975 is currently exclusive to the boxset and will not be available at digital outlets.

The Vinyl Collection, Vol.1 offers longtime fans and newcomers alike an opportunity to experience the timeless universal appeal of Billy Joel’s songs, an enduring discography of compelling stories told through the medium of pop music, where an unforgettable melody meets a well-turned phrase and captures something real and beautiful about being alive. The artistry of Billy Joel has resonated through the decades and his influence may be felt in today’s TikTok “Zanzibar” trend, Olivia Rodrigo name-checking “Billy Joel” and “Uptown Girl,” and K-pop supergroup BTS’s singer V giving Billy Joel a shout-out as an inspiration for “Butter.”

The Vinyl Collection, Vol.1 arrives to celebrate the 50th anniversary of Billy’s career starting with Cold Spring Harbor, first released November 1, 1971. Named after a favorite spot located on Long Island Sound near Billy’s hometown, Cold Spring Harbor introduced the world to Billy Joel, singer-songwriter, who, at the beginning of a new decade, was already penning future standards like “She’s Got a Way” and “Everybody Loves You Now.” The album charted in the United States (#158), Japan (#44) and the United Kingdom (#95).

Piano Man, the second studio album in The Vinyl Collection, Vol.1, was originally released on November 9, 1973 and, on the strength of the title track, an iconic signature song that entered the pop mainstream, helped the artist move on up from lounge singing in Los Angeles to the next level of show biz success. Driven by songs like “Piano Man,” “Captain Jack,” and “The Ballad of Billy the Kid,” the album became Billy’s first US Top 40 (#27) and charted in Australia (#14), Canada (#26), Japan (#112) and the United Kingdom (#98). Piano Man has been certified 4x Platinum by the RIAA.

Streetlife Serenade, Billy Joel’s third studio album, was originally released on October 11, 1974 and marked the first time Billy deployed synthesizers on a record. His live shows from the period often featured the instrumental, “Root Beer Rag” and the short song, “Souvenir,” was a frequent encore. The album introduced “The Entertainer,” a key composition in Billy’s repertoire. A Top 40 album in the United States (#35), Streetlife Serenade charted in Australia (#85) and Canada (#16) and has been certified RIAA platinum in the United States.

Originally released May 19, 1976, Turnstiles, Billy’s fourth studio album, was a celebration of the artist’s return to New York with tracks directly referencing his love for his hometown: “Summer, Highland Falls,” “Miami 2017 (I’ve Seen the Lights Go Out on Broadway)” and the classic “New York State of Mind,” most recently covered by a star-studded cast of musicians, artists and celebrities for a new music video, a PSA lensed in all five boroughs, made in support of the volunteer organization, #NYCNext. Turnstiles also premiered “Say Goodbye to Hollywood,” Billy’s sonic tribute to the Ronettes, the quintessential New York girl group; in 1977, Ronnie Spector released her cover of the song, backed by the E Street Band. Turnstiles peaked at #122 in the United States, charted in Australia (#12) and Japan (#286) and has been certified Platinum by the RIAA.

Billy Joel’s fifth studio album, The Stranger, was originally released September 29, 1977 and catapulted the artist into the pop culture stratosphere. The first Billy Joel album to be produced by Phil Ramone and the first to capture the chemistry of Billy in the studio with his road-tested touring ensemble, The Stranger was recorded in a mere three weeks and generated no less than four Top 40 hit singles: “Just the Way You Are” (#3), “Movin’ Out (Anthony’ Song)” (#17), “She’s Always a Woman” (#17) and the controversial “Only the Good Die Young” (#24). The album also introduced fans to repertoire standards including “Vienna” and “Scenes from an Italian Restaurant.” The Stranger peaked at #2 on the Billboard 200 while charting in Australia (#2), Canada (#2), Japan (#3), the Netherlands (#36), New Zealand (#2) and the United Kingdom (#24). The album has achieved RIAA Diamond status and has been recently certified 11x Platinum in the United States. The Stranger brought Billy Joel his first two career Grammy Awards when “Just the Way You Are” took home trophies for Record of the Year and Song of the Year at the 21st Grammy Awards in 1978. The Stranger is Billy’s top-selling non-compilation album to-date.

Originally released October 11, 1978, 52nd Street, Billy’s sixth studio album, was his first to hit #1 on the Billboard 200. Exploring new musical directions, Billy and returning producer, Phil Ramone, added jazz musicians to the studio ensemble and created an album that generated three Top 40 singles–“My Life” (#3), “Big Shot” (#14) and “Honesty” (#24)–and won two Grammys including the 1980 Grammy for Album of the Year and Best Pop Vocal Performance, Male. One of the first albums to be commercially released on the then-emerging compact disc format, 52nd Street pays tribute to one of the centers of New York City’s mid-century jazz scene, the fabled 52nd Street, where the album was recorded a block away from the CBS Building. Jazz trumpeter Freddie Hubbard plays the riffs on “Zanzibar,” a featured sound in a 2021 TikTok trend. The RIAA has certified the album 7x Platinum.

Originally released in September 1981 (and celebrating its 40th anniversary this year), Songs in the Attic, Billy Joel’s first live album, features top-flight performances recorded in concert in June-July 1980, curated specifically to introduce new fans to his earlier 1970s material following the phenomenal mainstream success of The Stranger. In the nearly ten years–and hundreds of concerts–since he’d recorded his debut, Billy Joel and his touring ensemble had become one of the tightest, most electrifying live bands in the world honing Billy’s songs into the concert gems heard on Songs in the Attic. The album peaked at #8 on the Billboard 200 while charting in Australia (#9), Canada (#21), Japan (#3), New Zealand (#30), Norway (#12), Sweden (#38) and the United Kingdom (#57). Songs in the Attic has been certified 3x Platinum by the RIAA.

Rounding out The Vinyl Collection, Vol.1 is the previously unreleased double 12″ vinyl bonus album, Live at The Great American Music Hall-1975, recorded at The Great American Music Hall in San Francisco, June 1975. The live gig from the Streetlife Serenade tour introduces the earliest available recordings of future Turnstiles classics “James” and “New York State Of Mind” into Billy’s catalog, and includes examples of Billy’s loving imitations of Joe Cocker, Elton John and Leon Russell – a staple of his early concerts.

Somewhere Along The Line

Cocker Imitation/You Are So Beautiful (Interlude)

Everybody Loves You Now

The Ballad Of Billy The Kid

Songs in the Attic