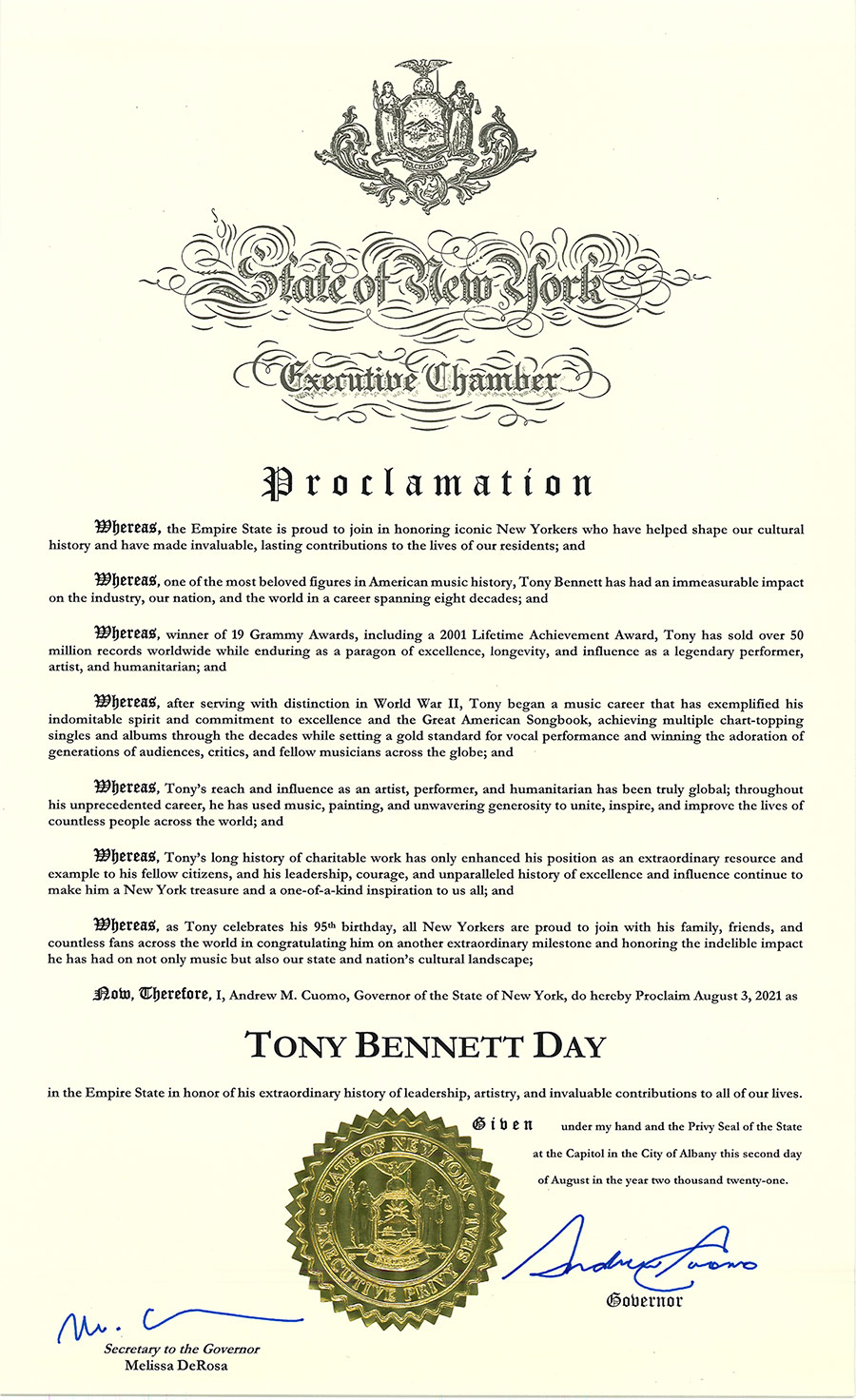 Singer Tony Bennett who got his start with Columbia Records in 1950 celebrates his 95th birthday today with a host of accolades and tributes. New York State has proclaimed today TONY BENNETT DAY. “Music and the arts have long been an essential piece of the fabric of New York, and you would be hard-pressed to find someone who has made more of a contribution in this space than Tony Bennett,” Governor Cuomo said. “Not only is Tony a born and bred New Yorker who has been dazzling audiences with beautiful music for more than six decades, but he has always stayed true to his humble New York roots and can always be spotted throughout the City whether he is working on his next painting in Central Park, or just chatting with fans on the street. From growing up as a child of immigrants, to all the contributions he has made to our community, Tony Bennett is a New Yorker in the truest sense of the word and I am honored to proclaim August 3, 2021 as ‘Tony Bennett Day’ in New York.”

Sony Music Entertainment, the parent company for Columbia Records and Legacy Recordings divisions, have endowed a bench in Tony’s name in Central Park, his most cherished spot in his hometown of NYC.  “Sony Music wishes Tony Bennett the happiest of birthdays as he turns 95,” said Richard Story, President of Sony Music Entertainment’s Commercial Music Group.  “Tony is an American treasure who became an international phenomenon and has chronicled his lifelong love affair with New York City in his music and his paintings.  It is an honor to dedicate this bench to Tony in his beloved Central Park, where he has experienced so much joy and inspiration across the years.” The Adopt-A-Bench program supports the Central Park Conservancy, the nonprofit that manages and cares for Central Park.

Bennett continues to visit the park regularly and has sketched and painted the landmark’s surroundings in over 70 pieces of original artwork.  The bench endowed in Tony’s honor is located at the east side of Center Drive when entering the Park at Central Park South and 6th Avenue and displays a plaque.

Celebrated friends including Alec Baldwin, Robert DeNiro and Keith Richards sent birthday wishes that are up on Bennett’s socials now and more will be posting birthday wishes to the 19-time Grammy winner throughout the day. Tony will be preforming at the opening night of ONE MORE TIME: AN EVENING WITH TONY BENNETT AND LADY GAGA at Radio City Music Hall.  The two-night engagement, tonight and August 5th, will mark Tony’s last live concert appearance in New York City. The shows sold out shortly after they went on sale to the public last week.

Tony Bennett was born in Astoria, Queens in 1926.  He is a Grammy and Emmy Award winner, a Gershwin Award and Kennedy Center honoree and an accomplished visual artist with three of his original paintings in the Smithsonian Institute’s permanent collection.  With his wife Susan Benedetto, he established Exploring the Arts to support arts education in public high schools, which was initiated by the creation of Frank Sinatra School of the Arts in Astoria, Queens.

For more information on Tony Bennett: