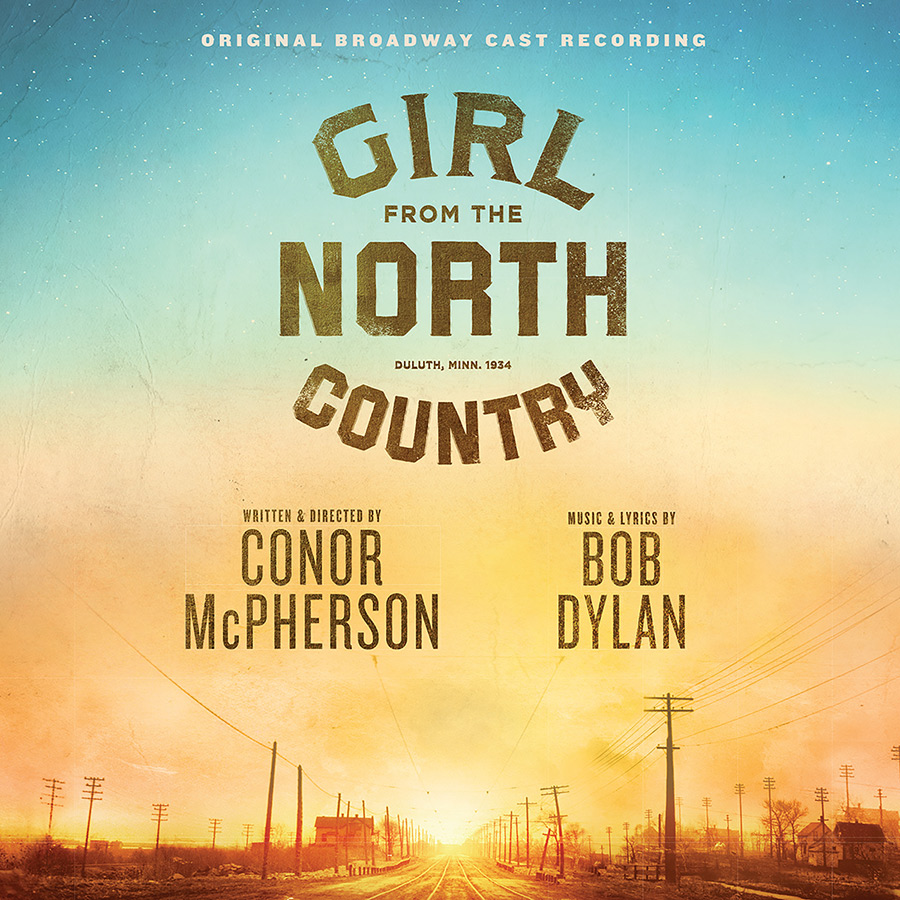 The eagerly-awaited Original Broadway Cast Recording of Girl From The North Country will be available in Digital and CD formats and may be pre-ordered HERE.

Girl From The North Country – Original Broadway Cast Recording was recorded on Monday, March 9, 2020 at Reservoir Studios and Steel Cut Audio in New York City, three days before New York City’s stay-in-place order came into effect and all theaters had to shut down due to the COVID-19 pandemic. The album will contain 22 tracks including some of Dylan’s biggest hits like “Slow Train,” “Hurricane,” and “Like A Rolling Stone,” among many others.

In his notes for Girl From The North Country – Original Broadway Cast Recording, McPherson praises the show’s musical collaborators: “So let me take a moment to express my wonder and gratitude for Simon Hale, our genius musical arranger, (who insisted we never use an instrument that wasn’t around in the 1930s) and the fabulous casts of Girl From The North Country. Not only are these some of the finest actors working in the world today but every one of them can sing, and every one of them can harmonize. Figuring out the show and rehearsing with these people has been one of the great joys of my life.”

In what The New York Times declares to be “the most imaginative and inspired use to date of a popular composer’s songbook,” Girl From The North Country is the uplifting tale of wanderers standing at a turning point in their lives. As they search for a brighter future, and hide from the past, they discover that they all need the same thing in the present moment: each other.

When asked about Girl From The North Country in an interview with historian Douglas Brinkley in The New York Times (June 12, 2020), Bob Dylan responded, “Sure, I’ve seen it, and it affected me. I saw it as an anonymous spectator, not as someone who had anything to do with it. I just let it happen. The play had me crying at the end. I can’t even say why. When the curtain came down, I was stunned. I really was. Too bad Broadway shut down because I wanted to see it again.”

Girl From The North Country made its eagerly-awaited Broadway premiere at the Belasco Theatre, with previews beginning February 7, 2020 and an official opening on March 5, 2020. A week later, on March 12, 2020, New York City’s stay-in-place order came into effect and all theaters had to shut down due to the COVID-19 pandemic.

Girl From The North Country will return to the Belasco Theatre on Wednesday, October 13.

2. Went To See The Gypsy

3. Tight Connection To My Heart (Has Anybody Seen My Love)

5. Ballad Of A Thin Man (Instrumental)

13. Lay Down Your Weary Tune (Instrumental)

14. Girl From The North Country

17. Tonight I’ll Be Staying Here With You (Instrumental)