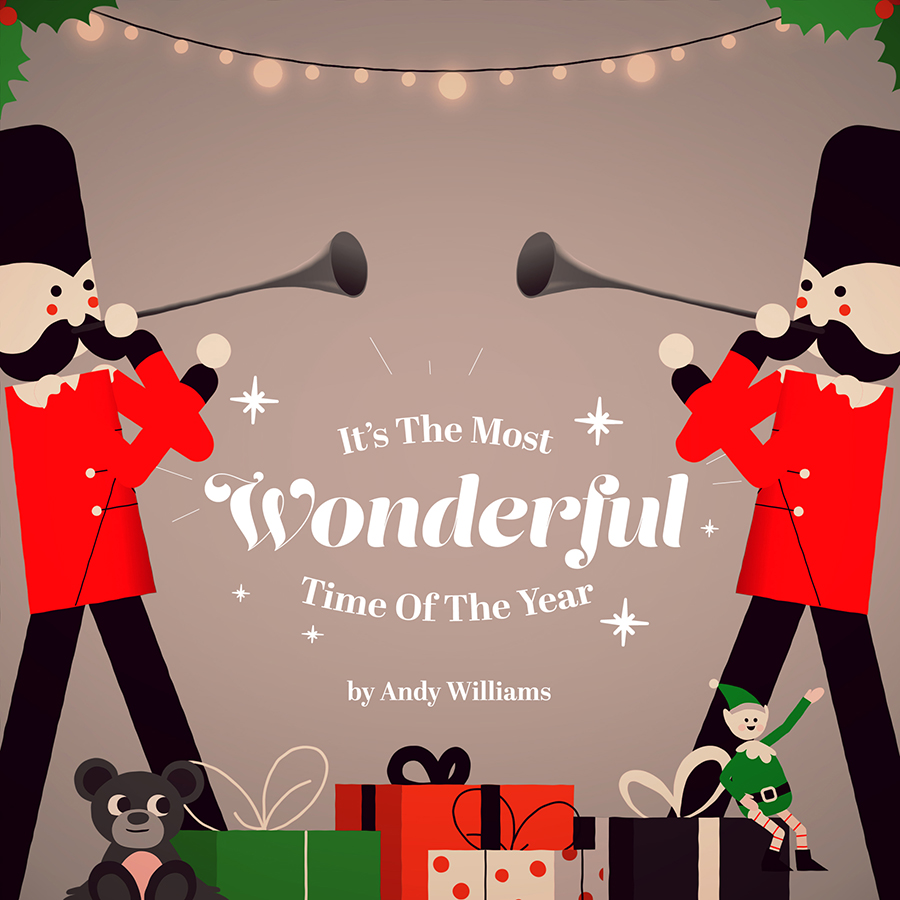 Legacy Recordings, the catalog division of Sony Music Entertaiment, rings in the yuletide with a series of new seasonal short music films, especially created for classic holiday records beloved since the pre-video era.

On Friday, December 4, Legacy’s 2020 holiday music film series continues with the premieres of three newly-created animated videos for “It’s Beginning to Look a Lot Like Christmas” by Perry Como and The Fontane Sisters (1951), “It’s the Most Wonderful Time of the Year” by Andy Williams (1963) and Eartha Kitt’s “Santa Baby,” the best-selling Christmas song of 1953.

Andy Williams – “It’s The Most Wonderful Time of the Year” https://andywilliams.lnk.to/ITMWTOY

Perry Como’s “It’s Beginning to Look a Lot Like Christmas” comes alive in a new animated film by Ginevra Boni, a design-driven animator and illustrator from Italy. Obsessed with color and movement, GIBO creates visual streams of consciousness in her work. Inspired by vintage 1950’s illustrations, Boni decided to base the narrative of her film around an alternative ‘preparation’ for the holidays, a wonderland where anthropomorphized ornaments, animated by the holiday spirit, become living seasonal mascots, decorating the tree under their own volition. “It’s Beginning to Look a Lot Like Christmas”is both timeless and nostalgic.

A seasonal standard composed in 1951 by Meredith Willson (best-known for The Music Man), “It’s Beginning to Look a Lot Like Christmas”has been performed over the years by a variety of artists–including Bing Crosby, Johnny Mathis, Michael Bublé and others–but it’s the 1951 RCA Victor hit recording by Perry Como and The Fontane Sisters with Mitchell Ayres & His Orchestra that defines the song. One of the most widely played holiday records in history, Perry Como’s “It’s Beginning to Look a Lot Like Christmas”had more than 128 million streams on Spotify (as of August 30, 2020).

The new music video for Andy Williams’ “It’s the Most Wonderful Time of the Year” was created by Qais Sarhan, an illustrator and animation director based in the UK. An animated geometric ballet of iconic Christmas elements–dancing elves, toy robots, teddy bears, nutcrackers and tree ornaments, Sarhan’s playful storyline begins in a snowglobe on a shelf in Santa’s workshop before opening up a fantastic, and nostalgic, world of heartwarming holiday magic.

The new “Santa Baby”music video is designed and directed by Kelly Jones, founder of Shibazzle, a black-owned visual media + design house, and produced by Cousins, a queer-owned New York based production studio, in their first collaboration. A contemporary secular holiday classic, Eartha Kitt’s “Santa Baby” has been transformed visually into a cinematic homage to the singer’s life and career with smooth and sexy animation utilizing an evocative color palette drawing the viewer into the charms of Eartha’s dreamy wishlist.

Written by Joan Javits and Philip Springer (aka “Tony Springer”), “Santa Baby”was originally released in 1953 as a single by Eartha Kitt with Henri René and His Orchestra, later appearing on Eartha’s self-titled first extended play (EP) in 1954. A sly yuletide wish list–including a yacht, a duplex and the deed to a platinum mine–sung to a sugar-daddy Santa by a seductive Miss Kitt, “Santa Baby”became an immediate smash, its risqué content and sexy delivery breaking the rules for Christmas-themed music. One of those rare songs–and records–that’s found a permanent place in popular consciousness, “Santa Baby” has been featured in various films and television series over the decades and has been covered by artists including Madonna, Kylie Minogue, Taylor Swift, Michael Bublé, Gwen Stefani and many others.

Legacy’s seasonal holiday videos are the latest releases in an ambitious ongoing label catalog project. Home to the world’s foremost library of historically important commercial recordings, Legacy has unprecedented access to works by the most significant musical artists of the 19th, 20th and 21st centuries, many of which have never had correlated visual content. Over the next weeks, months and years, Legacy’s curatorial staff will comb the archives for appropriate musical content to merge with new visual components. The label will be revisiting major hits and much-loved songs from the pre-video era and commissioning contemporary artists to create engaging new visual content.