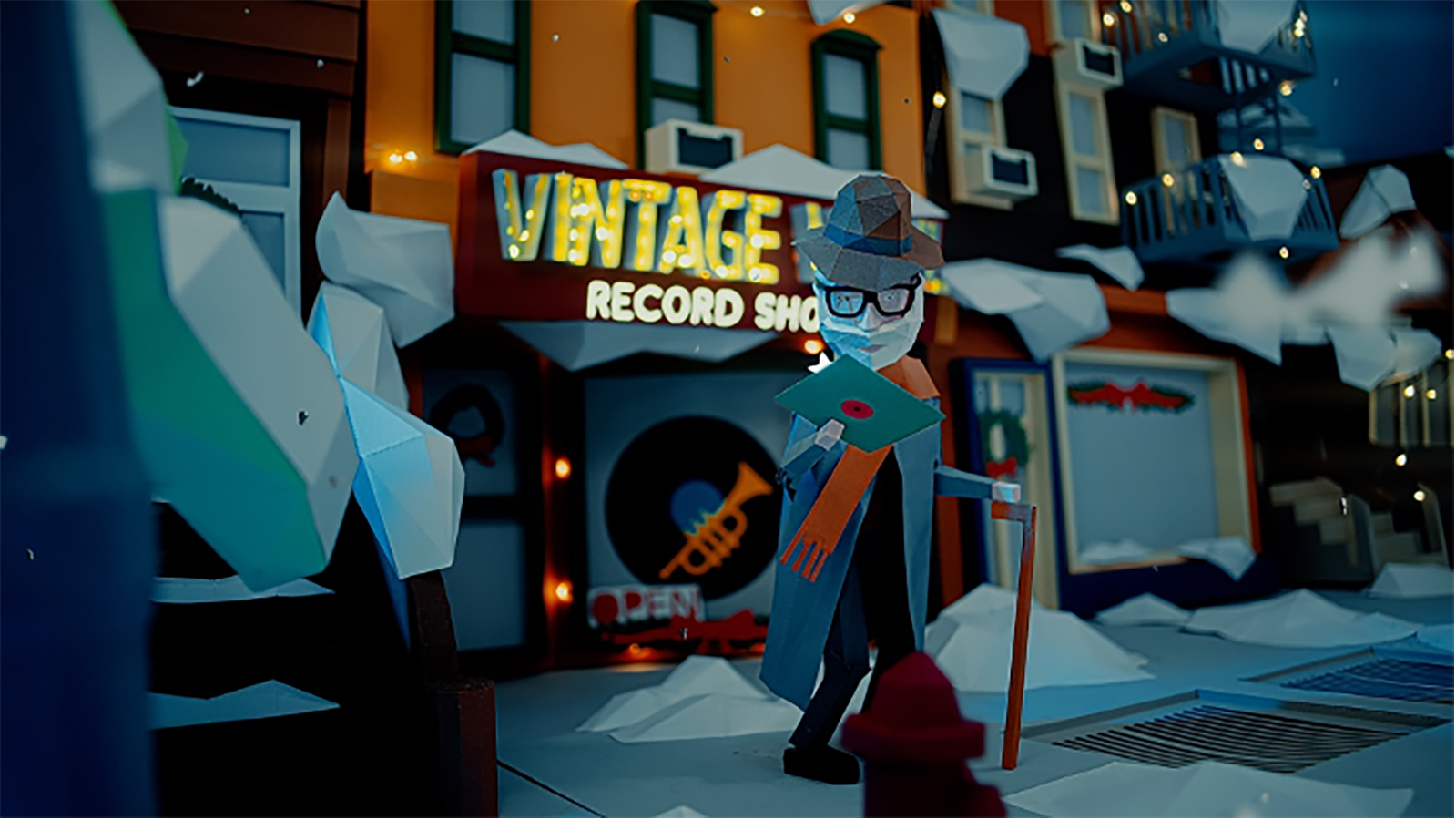 Legacy Recordings, the catalog division of Sony Music Entertainment, celebrates the 2020 holidays with the release of a series of new short cinematic music films, especially created for classic seasonal recordings beloved since the pre-video era.

The new music video for Frank Sinatra’s “Let It Snow” is produced and directed by Stefano Bertelli through his SeenFilm production company. A master in stop-motion animation, Bertelli has developed a signature look and style using Low Poly paper as his fundamental material. Bertelli spent five months building the sets, props and characters–all made of paper–for his magical interpretation of “Let It Snow.” Set in a snowy town square, the film visits a vintage record store, where the discovery of Christmas Songs by Sinatra leads our main character into an intricately-constructed wonderland of memory and imagination, guided by the wish to “Let It Snow.”

Check out an exclusive behind-the-scenes look at the making of the “Let It Snow” video here.

Written by lyricist Sammy Cahn and composer Jule Styne during a heat wave in Hollywood, California, in July 1945, “Let It Snow” is known around the world as a perennial seasonal standard, its cozy and comforting winter-themes evoking home, hearth and the holiday spirit. First recorded in 1945 by Vaughn Monroe and subsequently covered by many artists (including Dean Martin, Carly Simon, and Rod Stewart), “Let It Snow” has become most closely associated with Frank Sinatra, who made the song his own with his definitive 1950 single rendition featuring The B. Swanson Quartet.

The new “Sleigh Ride” music video was created by Sara Litzenberger, an animator/designer/director originally from the Chicago area now living in Perth, Western Australia. Inspired by old-school UPA (United Productions of America) animated films, industrials and modern commercial works from her time in New York, Sara developed her signature style, mixing geometric shapes and gritty textures combined with warm, soft colors to create a nostalgic, cozy atmosphere for pieces like “Sleigh Ride.” A seasonal showcase for Ronnie Spector’s iconic lead vocals, The Ronettes’ “Sleigh Ride” was originally released in 1963 and Litzenberger’s short film is influenced by design elements and graphic illustrations from the era, inviting the viewer into a magical animated landscape where a diverse cast of characters–who look like little wooden toys, spiky stars and circles, their textures and colors contributing to a feeling of nostalgic Christmas warmth. Further encouraging the ambience of childhood, home and holidays, Litzenberger pays homage to the “Animagic” stop-motion film technique well-known to fans of the beloved Rankin/Bass holiday specials (“Rudoph the Red-Nosed Reindeer,” “Frosty the Snowman” and others), lowering the frame-rate to imbue her drawn characters with a heightened sense of fun and whimsy in her fantasy “Sleigh Ride” of the imagination. Sara’s first film, “Undiscovered,” has screened at more than 60 festivals around the world and was featured in The New Yorker.

“Sleigh Ride” was originally composed by Leroy Anderson as a light orchestra standard and first recorded as an instrumental by Arthur Fielder and the Boston Pops Orchestra in 1949. In 1950, The Andrews Sisters recorded the first vocal rendition of the song with the now-familiar lyrics, penned by Mitchell Parish, celebrating wintery wonders and the romantic joys of sleigh riding. Originally released on November 22, 1963, Ronnie Spector and The Ronettes’ rendition of “Sleigh Ride,” produced by Phil Spector as part of A Christmas Gift For You, continues defining the sound of contemporary holiday music with its unforgettable “ring-a-ling-a-ling, ding-dong-ding” backing vocal hook. The track has charted yearly in Billboard’s Top 10 U.S. Holiday 100 and is The Ronettes’ 2nd highest-charting US hit (after “Be My Baby”).

Following “Let It Snow” and “Sleigh Ride,” Legacy will be releasing new seasonal music short films throughout the 2020 holidays for artists including Darlene Love (“Christmas, Baby Please Come Home”), Eartha Kitt (“Santa Baby”), Perry Como and the Fontane Sisters (“It’s Beginning to Look at Lot Like Christmas”) and Andy Williams (“It’s the Most Wonderful Time of the Year”).

Legacy’s 2020 seasonal holiday videos are the latest releases in an ambitious ongoing label catalog project. Home to the world’s foremost library of historically important commercial recordings, Legacy has unprecedented access to works by the most significant musical artists of the 19th, 20th and 21st centuries, many of which have never had correlated visual content. Over the next weeks, months and years, Legacy’s curatorial staff will comb the archives for appropriate musical content to merge with new visual components. The label will be revisiting major hits and much-loved songs from the pre-video era and commissioning contemporary artists to create engaging new visual content.