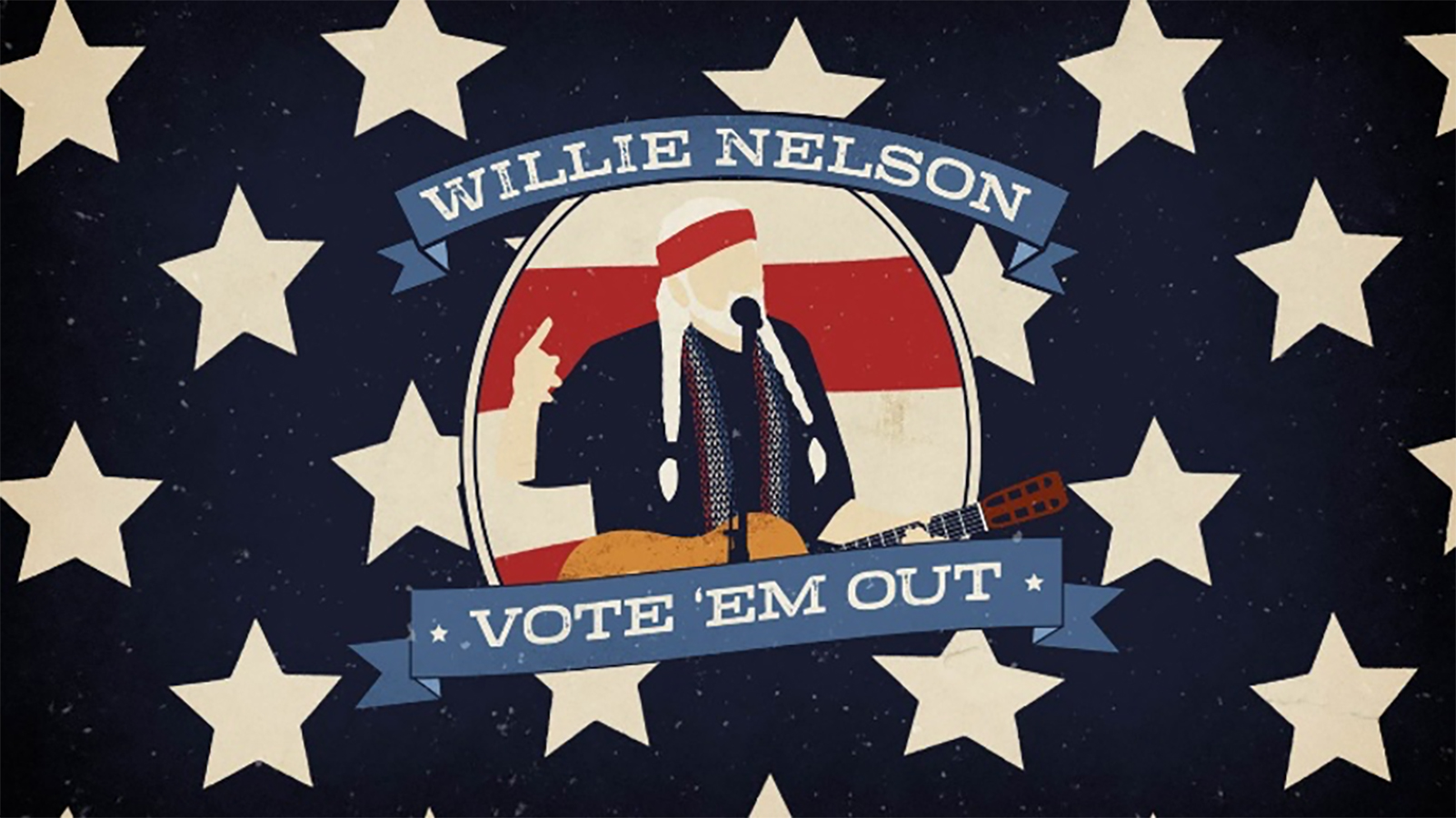 The boisterous call to action premieres in front of the 35th Edition of Farm Aid on Saturday, September 26

New York, NY – September 25, 2020 – Willie Nelson today released an animated video for “Vote ‘Em Out,” his urgent exhortation to citizens everywhere to use the most powerful tool at their disposal.

You can watch the new video for “Vote ‘Em Out” here https://WillieNelson.lnk.to/voteemoutvideo

The message is even more topical today than when the song was first released in front of the 2018 midterms and the video drops right before Willie is joined by his partners Dave Matthews, John Mellencamp and Neil Young for the 35th edition of Farm Aid. Farm Aid 2020 On The Road, will go virtual this year and fans will be able to watch it Saturday, September 26 at 8PM EST/5PM PST in HD online at Farm Aid’s website or YouTube Channel, on cable TV on AXS TV or on satellite radio at SiriusXM on either the Willie’s Roadhouse (Ch. 30) or Dave Matthews Band (Ch. 30) channels. Besides the four principals, other performers include Brandi Carlile, Jack Johnson, Norah Jones, Bonnie Raitt & Boz Skaggs, Nathanial Rateliff, Chris Stapleton and many more.

This year’s Farm Aid comes as the plight of the family farmers has only grown more dire in the face of a pandemic and its economic fallout. Whether it’s voting at the ballot box or via the mail on November 3 or contributing on Saturday to support Farm Aid’s efforts, Nelson just wants people to use the power they have.

Written with and produced by longtime collaborator Buddy Cannon, “Vote ‘Em Out” finds Willie, joined by sons Lukas and Micah, describing the right to vote as a hard-won and sacred, putting the reins of power in the hands of the people:

“If it’s a bunch of clowns you voted in

Election day is comin’ ‘round again

If it’s more than you’ll allow

Nelson originally premiered the song “Vote ‘Em Out” live on September 29, 2018 at a rally in Austin, TX for Beto O’Rourke (WATCH HERE), the Democratic Party nominee who was then surprising the political world in his competitive challenge to incumbent Ted Cruz for the Texas U.S. Senate race in the 2018 midterms. As USA Today noted, the crowd estimated at 55,000+ “was boisterous all night, but reached its highest volume when Nelson debuted a new song to mark the occasion titled “Vote ‘Em Out”.” Willie introduced the song, saying “Here’s a new song I wanna spring on y’all tonight. Take it home with you and spread it around.” The response to the song was immediate as fans, as well as news and media outlets, did indeed spread it around and Willie went on to perform the track on an episode of the ABC show Jimmy Kimmel Live! a week before the 2018 election.