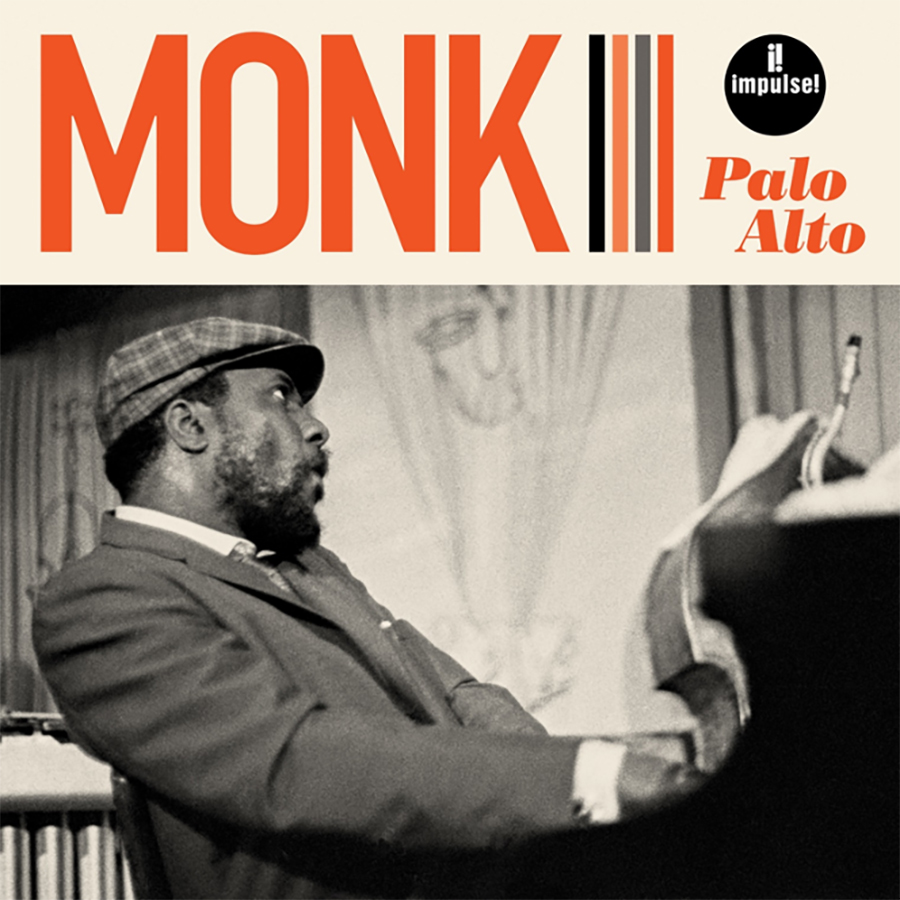 In the fall of 1968, a sixteen-year old high school student named Danny Scher had a dream to invite legendary jazz pianist and composer Thelonious Monk and his all-star quartet to perform a concert at his local high school in Palo Alto, CA. In a series of twists and turns, against a backdrop of racial tension and political volatility, that concert was recorded by the school’s janitor. Palo Alto is now set for release on September 18 physically on Impulse! Records and digitally on Legacy Recordings, the catalog division of Sony Music Entertainment.

“That performance is the one of the best live recordings I’ve ever heard by Thelonious,” says T.S. Monk, son of the pianist/composer maestro, drummer and founder of the Thelonious Monk Institute. “I wasn’t even aware of my dad playing a high school gig, but he and the band were on it. When I first heard the tape, from the first measure, I knew my father was feeling really good.”

1968 was a tumultuous year in America, marked by the shocking assassinations of Martin Luther King, Jr. and Robert F. Kennedy, unsettling revelations about the Vietnam War, and protests and unrest throughout the country. Palo Alto and the primarily African-American neighboring town of East Palo Alto were no different. This was the stage for young high school student Danny Scher, a jazzhead with an idealistic bent and knack for concert promotion (who later on became a well-known promoter who worked with legendary San Francisco rock promoter Bill Graham.)

Looking back, Scher says, “I always looked at music as a way to put issues on hold or up to a mirror, whether they be political or social. On October 27, 1968, there was a truce between Palo Alto and East Palo Alto. And that is what music does.”

In many ways, Thelonious Monk was at the pinnacle of his career in 1968– his quartet was at its best musically, and he was still riding high in the public eye, having sustained his popularity since appearing on the cover of TIME Magazine a couple of years prior.  However, behind the scenes finances were strained and his health had deteriorated. When he got a call in the middle of his three-week run at the Jazz Workshop in San Francisco, he listened to the teen on the other end of the receiver. Perhaps he was moved by the young promoter’s gumption.

And so it came to be that on October 27, 1968, Thelonious Monk and his quartet – Charlie Rouse (tenor sax), Larry Gales (bass), and Ben Riley (drums) – climbed out of the Scher  family van and walked through a rainy parking lot full of stunned Palo Alto and East Palo Alto residents, into Palo Alto High School’s auditorium and delivered a stellar, energetic and historic 47-minute set.

Included in the mix is Monk’s lyrical love song “Ruby, My Dear” (Rouse boldly blowing the melody with Monk comping in his unique oblique way then taking the lead with a dazzling solo);  the dynamic and spirited “Well, You Needn’t” taken for a 13-minute ride with solos by all members; the pianist’s captivating solo reading of “Don’t Blame Me” by Jimmy McHugh; an epic dance through “Blue Monk”; and a playful charge through “Epistrophy.” The show ends with a truncated encore of Monk slowly striding through the 1925 Tin Pan Alley hit tune by Rudy Vallee, “I Love You Sweetheart of All My Dreams” and after a standing ovation saying his goodbye because they had to leave to make their San Francisco date that evening.

The concert was quite impressively recorded by Palo Alto High School’s janitor, and the tape sat in the attic of Scher’s family home for years. Now it will finally be available to the public.

For nearly sixty years, Impulse! Records has stood as a label of musical integrity and lasting cultural significance. Known as the “house that Trane built” in honor of its best-selling artist John Coltrane, the label produced music exciting in its experimental charge, and spiritual in its priority. Sonny Rollins, Quincy Jones, Max Roach, Ray Charles, Alice Coltrane, Keith Jarrett, Charles Mingus, Sun Ra, and Pharoah Sanders were but a few of the legendary musicians who helped define the label’s sound and message. To this day, Impulse! continues to proudly wear its distinctive orange-and-black color scheme, and be home to the new vanguard of creative musicians including Shabaka Hutchings and his groups Sons of Kemet, Shabaka & the Ancestors, and the psychedelic jazz trio The Comet Is Coming.