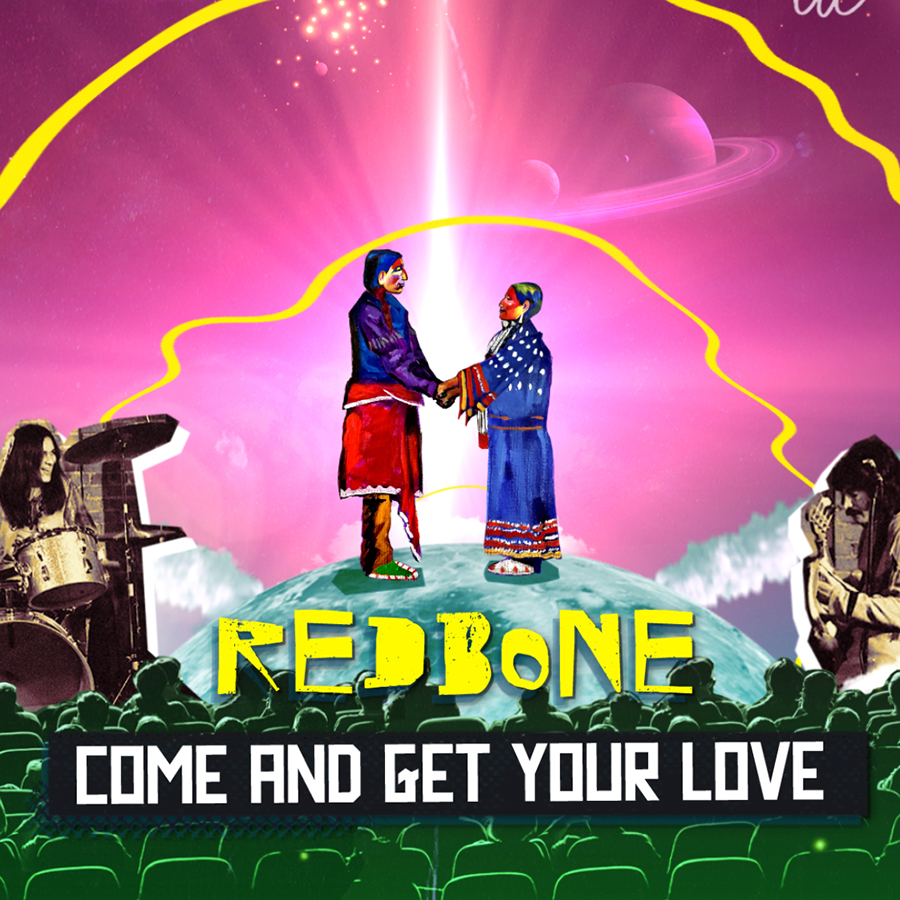 Legacy Recordings, the catalog division of Sony Music Entertainment, is releasing a new music video for “Come and Get Your Love,” the much-loved 1970s pop-rock classic by groundbreaking Native American band Redbone.

Please enjoy the new “Come and Get Your Love” video here: https://Redbone.lnk.to/cagylvideoPR/youtube

The “Come and Get Your Love” short film is the inaugural release in an ambitious new Legacy catalog project. Home to the world’s foremost library of historically important commercial recordings, Legacy has unprecedented access to works by the most significant musical artists of the 19th, 20th and 21st centuries, many of which have never had correlated visual content. Over the next weeks, months and years, Legacy’s curatorial staff will comb the archives for appropriate musical content for new visual components. The label will be revisiting major hits and much-loved songs from the pre-video era and commissioning contemporary artists to create engaging new visual content.

When “Come and Get Your Love” was released as a 7″ single on Epic Records in January 1974, a longer version had been previously available on Redbone’s fifth studio album, 1973’s Wovoka. The band had taken its name from a Cajun term for multi-racial individuals or culture and the members of Redbone drew from Yaqui, Shoshone, and Mexican heritage as well roots in Texas, Louisiana and California. The group’s core musicians, brothers Patrick and Candido “Lolly” Vasquez-Vegas, were born in Coalinga, California (near Fresno), moved to Los Angeles in 1959 and performed for a decade on the club scene as Pat and Lolly Vegas before founding Redbone.

One of the defining records of classic pop radio, Redbone’s “Come and Get Your Love” has never had an “official” music video to accompany the track. While live versions of Redbone performing the song and static image clips of the song have been online, fans can now enjoy a new short film created with the song specifically in-mind as the soundtrack.

Hailing from Morelia, Mexico, producer and director, Juan E Bedolla (who’s garnered two Emmy nominations, multiple Telly and Addy awards and other honors) worked closely with Native American artist Brent Learned in the creation of “Come and Get Your Love,” a short film chronicling the experiences of a spiritual traveler who leaves home to explore a new world. The film is inspired by a variety of sources, from graffiti to magical realism, mixing reality with the fantastic, the past with the future, and reexamining pop-culture imagery in the context of contemporary events. “Come and Get Your Love” offers a look into the living and changing culture of Native America in the 21st Century through the eyes of the film’s mythic traveler.

An award-winning and collected Native American artist born and raised in Oklahoma City, Brent Learned is an enrolled member of the Cheyenne-Arapaho Tribes of Oklahoma and known for his colorful, impressionistic portrayals of the Plains Indian way of life. Brent’s work may be seen in museums including the Smithsonian Institute-National Museum of the American Indian in Washington D.C. and the Cheyenne/Arapaho Museum in Clinton, Oklahoma, among others. According to Brent, the time-traveling central figure in the “Come and Get Your Love” film is an expression of universality, “This is a commentary on an overarching idea repeated throughout the video, that of seeking our love/interests in all the wrong places, when often times they are right in front of us; if only we’re willing to look.”

An unforgettable recording first signifying the early 1970s, “Come and Get Your Love” has proven its abiding appeal across the decades with a universal sound and message that still points toward the future. Covered by multiple artists over the years (notably the 1995 Real McCoys’ version), “Come and Get Your Love” introduced a whole new generation of fans to Redbone’s music with its inclusion in the “Guardians of The Galaxy” film. In September 2020, IDW Publishing will release an illustrated biography of the group, Redbone: The True Story of a Native American Rock Band; written by Christian Staebler and Sonia Paoloni in cooperation with the Vegas family and illustrated by Thibault Balahy, the book is an intriguing, historically accurate telling of the high-flying career of Pat and Lolly Vegas that illuminates key pieces of American history and the powerful story of the Native American civil rights movement.

Four years ago, on July 27, 2016, the Standing Rock Sioux Tribe took their first legal action against the Dakota Access Pipeline, an oil route from North Dakota to Illinois that has inspired intense protests and legal battles. On July 6, 2020, a district court ruled the Dakota Access Pipeline must shut down pending an environmental review and be emptied of oil by August 5. On July 9, the Supreme Court ruled that roughly half of Oklahoma was Native American land, in an historic major victory. Now is the time to learn about and celebrate Native American culture and history.

Pat Vegas–Redbone founding member, bassist and “Come and Get Your Love” arranger/co-producer–talked about the song and the new video, “We wanted to show that our people were about love…. The chorus—’Come and get your love’—is about pure love, without all the overthinking and trendy phrases. Many think the song is just about a man singing to a woman. It is, but it’s also about the coming together of different peoples….. This visual really takes you on a journey and reminds us that the sky’s not the limit, it’s only the view. It’s something to help the young understand the old, one is silver the other gold, both are valuable.  To everyone, I’d like to say, ‘Chioke Uttesia,’ which is ‘thank you’ in Yaqui language.”