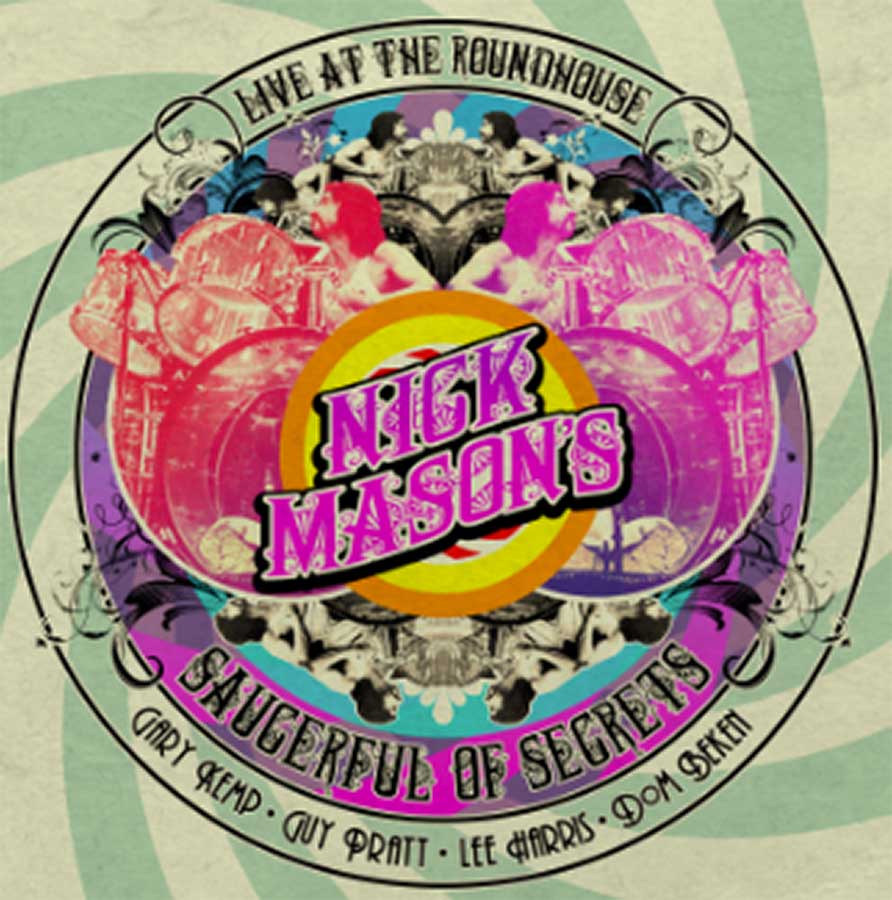 CONCERT FILM TO SCREEN AT THEATERS FOR ONE NIGHT ONLY

“If you have the slightest interest in Pink Floyd, do not miss Nick Mason’s

Saucerful Of Secrets… You won’t even need acid to blow your mind.”

“A fantastic voyage of rediscovery.”

“Immense, electrifying, galvanizing, mesmerizing and still deeply strange, bending the formats of primal rock into all kind of weird and wonderful shapes…a set of such startling intensity it seemed to mock the very notion of nostalgia.”

“A beautifully woven musical tapestry crafted from strands of Pink Floyd’s DNA, but also so much more.”

Legacy Recordings, a division of Sony Music Entertainment is proud to announce the release of Nick Mason’s Saucerful Of Secrets Live At The Roundhouse, an extraordinary all-new concert recording featuring an array of Pink Floyd classics rarely performed by the band during its lifetime. The 22-track collection arrives April 17 as a double-CD/DVD package, double-vinyl, and on Blu-ray; pre-orders are available now. Additionally, the band today shares the song/video for “Fearless” as an exclusive video trailer.

PRE-ORDER NICK MASON’S SAUCERFUL OF SECRETS LIVE AT THE ROUNDHOUSE AND WATCH THE EXCLUSIVE TRAILER: HERE

Also, in collaboration with Trafalgar Releasing and Sony Music Entertainment, Nick Mason’s Saucerful Of Secrets Live At The Roundhouse will be coming to cinemas in selected cities worldwide for one night only on March 10, 2020. This theatrical event will also include a pre-recorded cinema exclusive Q&A with Nick Mason and the band where they will answer questions submitted by fans. Tickets are on sale now from NickMasonFilm.com.

Nick Mason – founding drummer and the only constant member of Pink Floyd since their 1965 formation – united Gary Kemp (guitar, vocals), Guy Pratt (bass, vocals), Lee Harris (guitar), and Dom Beken (keyboards) as Nick Mason’s Saucerful Of Secrets in 2018, fueled in part by the desire to perform the legendary band’s pre-Dark Side of the Moon material, timeless songs which had not been played on stage in decades.

An invitation-only performance at London’s Dingwalls was met by rapturous acclaim and followed by a sold out theatre tour of North America, Europe, and the United Kingdom. The band returned in 2019, including two sold out May shows at The Roundhouse – the historic Camden venue where Pink Floyd famously played on October 15, 1966, teaming with Soft Machine for an “All Night Rave” launching the famed underground newspaper, International Times.

Indeed, Nick Mason’s Saucerful Of Secrets has been met with sold out houses and ecstatic critical applause around the world:

“A thrillingly raw 90-minute set of (Pink Floyd’s) early psychedelic rock…Notable highlights included a searing ‘Lucifer Sam’ and the visceral white noise rush of ‘Set The Controls For The Heart of the Sun,’ while early singles ‘See Emily Play’ and ‘Arnold Layne’ were reborn with a fresh intensity and power. There were also revivals of languid instrumental tracks and dazzling, semi-improvised psychedelic guitar wig-outs that harked back to the loose structures and unconventional time signatures changes of the Syd Barrett era.” – Billboard

“Mason has assembled a crew that has some fealty to the original arrangements, but not so much faithfulness that it doesn’t feel more like an actual bona fide rock band than the Floyd itself arguably did in its later years. This is a group that has the chops to carry off the chosen mission to the satisfaction of the heartiest prog and jam-band enthusiasts, but also brings some madcap laughs and (Syd) Barrett.” – Variety

“Nick Mason’s Saucerful of Secrets plays the music of (Pink Floyd’s) early years from 1965-1972 and they do it with gusto…The most likely place to hear someone lay down these early gems would be in some dingy punk club. That’s the vibe they carry and it’s the spirit (Mason) served them up with.” – Vancouver Sun

“A must-see concert experience…the genius of this project is that is concentrates solely on Pink Floyd’s pre-1973 catalog. The result is a heady psychedelic workout that, simply put, all big Pink Floyd fans should experience.” – The Mercury News

Mason – who last year was named as a “Prog God” at Prog Magazine’s prestigious Progressive Music Awards in London, joining the ranks of such previously honored icons as Peter Gabriel, Tony Banks, Jon Anderson, Rick Wakeman, Ian Anderson, Carl Palmer, and Steve Howe – will soon return to the road with Saucerful Of Secrets for the band’s biggest tour schedule thus far. The “More Games For May Tour” – which takes its name from Pink Floyd’s milestone 1967 concert at London’s Queen Elizabeth Hall – begins this April with UK dates and a European run that includes visits to Belgium, Luxembourg, Germany, France, Austria, Czech Republic, Denmark, and the Netherlands. North American dates will be announced soon – for updates and more, please visit www.thesaucerfulofsecrets.com.

NICK MASON’S SAUCERFUL OF SECRETS LIVE AT THE ROUNDHOUSE

Green Is The Colour

Let There Be More Light

Set The Controls For The Heart Of The Sun

One Of These Days

A Saucerful Of Secrets

Point Me At The Sky