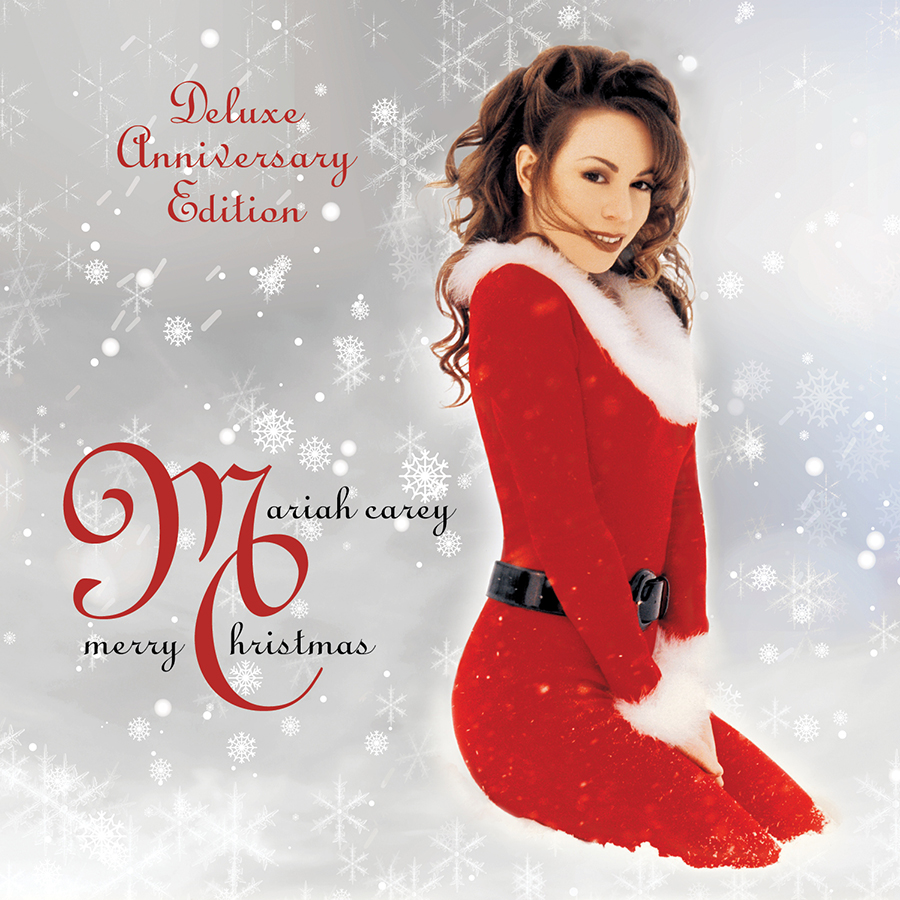 Get it HERE via Sony Music Entertainment’s Legacy Recordings.

Mariah Carey’s official D2C Store offers an “All I Want For Christmas Is You” CD single with several versions of the title classic, as well as “Hero” performed live from The Cathedral of St. John The Divine.The Cassingles come in red or green cassettes featuring “All I Want For Christmas Is You” and festive, collector’s pop-out decorations on the packaging. The 12” Vinyl and 7” Vinyl also include the festive pop-out decorations.

Among the bonus material, the two-disc set boasts the audio from her unforgettable live performance at The Cathedral of St. John The Divine on December 8, 1994 in New York City. For the first time ever, fans can relive this historic fundraising event that notably benefited The Fresh Air Fund and Camp Mariah. By generating over half a million dollars, it stood out as one of the largest fundraising events ever for The Fresh Air Fund in at least 30 years, if not the greatest throughout its 117-year existence. Now essential Christmas-time listening, the evening also captured one of the very first live performances of “All I Want For Christmas Is You.” Not to mention, the set comprises highly rare and unheard recordings of the standards “Silent Night,” “Joy To The World,” “Jesus Born On This Day,” and more. Additionally, the unveiling of the show from The Cathedral of St. John The Divine is a long-anticipated official release of live concert material that has been sought after by fans for many years.

Expanding this powerhouse tracklisting, she also delivers a beautifully modernized and previously unreleased take on “Sugar Plum Fairy.” In her new arrangement, Mariah’s voice glides over a glassy beat as she delivers another enchanting and entrancing holiday anthem, highlighting all aspects of her incredible 5-octave vocal range. Never before released in the US, the Deluxe Anniversary Edition touts “God Rest Ye Merry Gentleman,” in addition to Mariah’s Golden Globe nominated track “The Star,” and “When Christmas Comes” with John Legend, remixes, and more.Taking over social media, fans may join the conversation on Twitter today. They can unlock a custom Mariah Carey emoji by using the hashtags #MC25 and #MariahChristmas.Additionally, Mariah she has joined forces with Amazon for a sneak peek at how she personally celebrates Christmas! Commemorating the 25th anniversary of “All I Want For Christmas Is You,” she curated an Amazon gift guide with items she personally uses, gifts, or pieces she found especially inspiring for the holidays. Check it out HERE. She hand-selected gifts from dozens of brands across Amazon, including new and upcoming selections from Amazon Launchpad. She built a gift guide that would fit right under her tree.

The holidays wouldn’t be the same without Mariah Carey’s Merry Christmas. Originally released on November 1st, 1994, it went on to receive a 6x platinum certification from the RIAA, sell 15 million copies worldwide, and earn the title of “The Best-Selling Christmas Album of All-Time.” The single “All I Want For Christmas Is You” scored a 6x platinum certification and ascended into the Hot 100 as her 28th Top 10 single on the respective chart. Just last year, its eternal power would be reaffirmed in 2018. It emerged in the Top 5 of the Hot 100 as “the second holiday song in sixty years to peak in the Top 5.” Moving over 16 million copies around the globe, it remains the 11th best-selling single of all time. Plus, it spawned a children’s book and animated family film.

The Queen of Christmas shines brighter, bigger, and bolder than ever.

MARIAH CAREY is the best-selling female artist of all time with more than 200 million albums sold to date and 18 Billboard Hot 100 #1 singles (17 self-penned), more than any solo artist in history. Mariah is a singer/song­writer/producer recognized with multiple Grammy Awards, numerous American Music Awards, Billboard‘s “Artist of the Decade” Award, Billboard’s “Icon Award,” the World Music Award for “World’s Best Selling Female Artist of the Millennium,” and BMI’s “Icon Award” for her outstanding achievements in songwriting, to name a few – with her distinct five-octave vocal range, prolific songwriting, and producing talent, Mariah is truly the template of the modern pop performance. Mariah’s ongoing impact has transcended the music industry to leave an indelible imprint upon the world at large. She made her entry into the world of independent film with her landmark performance in “WiseGirls” starring alongside Academy Award winner Mira Sorvino and Melora Walters. In 2009, Mariah was recognized with the Breakthrough Performance Award at the Palm Spring International Film Festival for her critically acclaimed role in Lee Daniels’ “Precious.” Mariah went on to appear in Daniels’ stellar ensemble piece “The Butler” (2013). A Congressional Award recipient, Mariah has generously donated her time and energy to a range of philanthropic causes near to her heart including Save the Music, the Make-A-Wish Foundation, World Hunger Relief, and the Elton John AIDS Foundation, among many others. A tremendous supporter of children’s charities, both domestic and international, Mariah founded Camp Mariah in partnership with the Fresh Air Fund, a retreat for inner city children to explore career development. Mariah is represented by Roc Nation, CAA and Imprint PR. www.mariahcarey.com