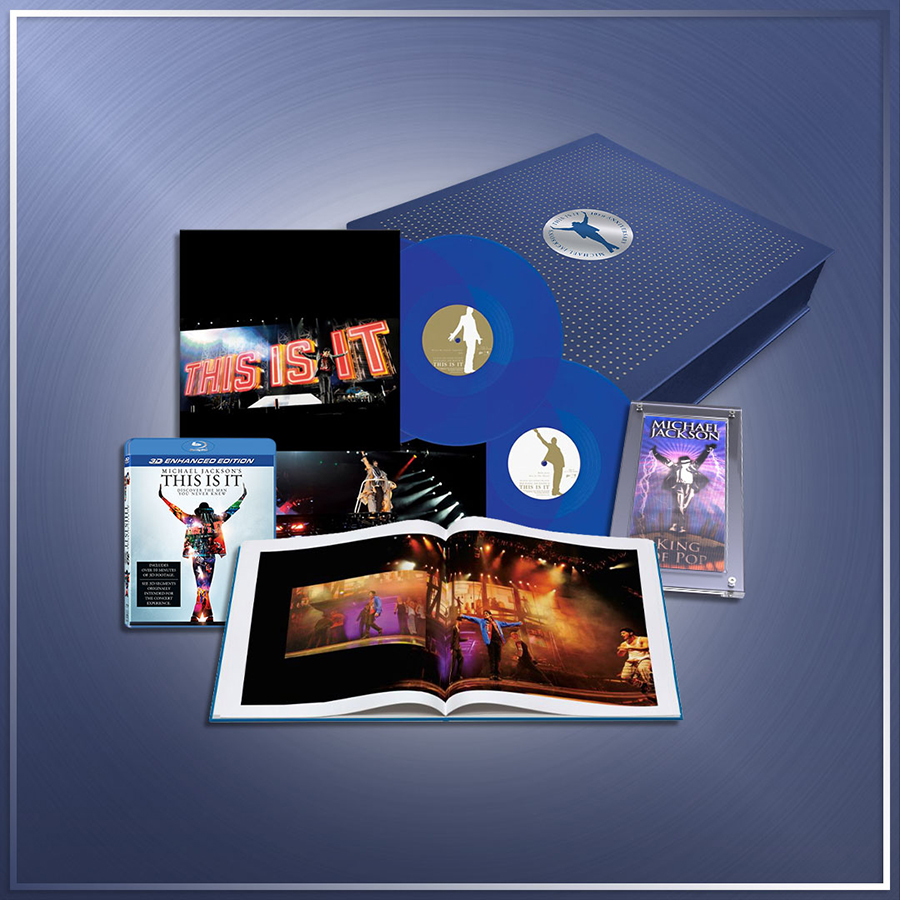 ONLY 1000 NUMBERED COPIES OF THE COLLECTIBLE WILL BE CREATED; EACH INCLUDES COFFEE TABLE BOOK, AUTHENTIC LENTICULAR THIS IS IT CONCERT TICKET & MORE

Sony Music and the Estate of Michael Jackson will release MICHAEL JACKSON’S THIS IS IT 10TH ANNIVERSARY BOX SET, a numbered, spectacularly packaged, custom box with a built-in sound responsive LED light panel on its cover.   A collector’s dream, each set includes an authentic lenticular concert ticket for the July 24, 2009 performance of This Is it at the O2 Arena, a quality 60 page hardcover coffee table book with full page photographs including over two dozen previously unpublished,  the 4LP This Is It album on translucent blue vinyl and a rare promotional 3D enhanced Blu-Ray disc of the film, Michael Jackson’s This Is It. Only 1000 copies of the set will be created, and they are available for pre-order now only HERE.    For a video unboxing of the box set, click HERE. The MICHAEL JACKSON’S THIS IS IT 10TH ANNIVERSARY BOX SET will start shipping on 12/11/2019.

The 2009 documentary Michael Jackson’s This Is It was directed by Kenny Ortega and follows Michael’s rehearsals and preparation for his concert series of the same name scheduled to start on July 13, 2009, but canceled due to his death eighteen days prior on June 25.

When the film was released, fans around the world waited in line for days for tickets, and Michael Jackson’s This Is It became the highest worldwide grossing documentary/concert film of all time. Reviewers were emotional in their praise:  “The art,” said Richard Corliss in Time Magazine, “is in what we’re privileged to watch: a perfectionist who quietly pushes himself to prove he’s still got it;”  Peter Travers at Rolling Stone wrote, “unmissable”, a “transcendent tribute”; and Slate said,  “Jackson’s body moves with such otherworldly grace it’s as if he’s never not dancing…. it’s heart stopping to see it again for the last time.”

The box set was created to commemorate the 10th anniversary of the release of the film, and is truly a quality detailed and elaborate package, befitting the King of Pop.

MICHAEL JACKSON’S THIS IS IT 10TH ANNIVERSARY BOX Details: