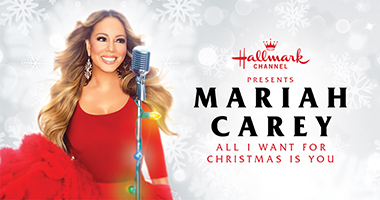 Portion of Proceeds To Be Donated to Toys For Tots; Fans Encouraged to Bring Unwrapped Gifts to Donate At Each Stop

Today global singing and songwriting icon Mariah Carey has announced an exclusive limited engagement holiday run with her All I Want For Christmas Is You Tour, presented by Hallmark Channel.  This tour marks a special milestone in the legacy of Carey’s beloved album, Merry Christmas, which celebrates its 25th anniversary this holiday season.  Mariah will bring an extravagant, festive outing that only she can deliver to limited cities across the U.S. this winter. Her special run of can’t-miss shows will bring out the festive spirit in fans of all ages.

The All I Want For Christmas Is You Tour will be filled with Carey’s most recognizable hits, as well as the internationally celebrated music from Carey’s Merry Christmas album, re-releasing on November 1st, in recognition of the 25th anniversary (to the day!) of the album’s original release date.

Produced by Live Nation, the exclusive holiday run will kick off November 22ndin Las Vegas and travel the east coast starting December 7th in Atlantic City before making stops in Washington D.C., Uncasville, and Boston. The tour will wrap December 15th in New York, NY at Madison Square Garden – which is the first time Carey will perform her Christmas show at the venue.

$1 from each ticket sold will benefit Toys for Tots, a 72-year national charitable program run by the U.S. Marine Corps Reserve, which provides happiness and hope to less fortunate children during each Christmas holiday season. Unwrapped toys will also be collected at each event for donation to Toys for Tots.

The Queen of Christmas recently announced she is celebrating the 25th anniversary of her iconic Merry Christmas albumthis year by releasing a 2-CD Deluxe Anniversary Edition for fans on November 1st. The new deluxe edition includes the original album, plus a bonus disc featuring previously unreleased live tracks from Mariah’s 1994 St. John The Divine Benefit Concert, rare remixes, a brand-new, festive rendition of the Sugar Plum Fairy and additional seasonal tracks. Various configurations include D2C products, 7” and 12” vinyl, cassette singles, CD and digital configurations. The original album and the ubiquitous “All I Want For Christmas Is You” were both recently certified 6x platinum by the Recording Industry Association of America (RIAA).  Pre-orders for the Deluxe Anniversary Edition are available HERE.

Mariah’s continued record-breaking achievements, celebrations and surprises are expected to escalate for the 2019 Holiday Season.

Mariah Carey All I Want For Christmas Is You presented by Hallmark Channel Tour Dates – Tickets on sale Friday, October 4:

All I Want For Christmas Is You presented by Hallmark Channel

MARIAH CAREY is the best-selling female artist of all time with more than 200 million albums sold to date and 18 Billboard Hot 100 #1 singles (17 self-penned), more than any solo artist in history. Mariah is a singer/song­writer/producer recognized with multiple Grammy Awards, numerous American Music Awards, Billboard‘s “Artist of the Decade” Award, Billboard’s “Icon Award,” the World Music Award for “World’s Best Selling Female Artist of the Millennium,” and BMI’s “Icon Award” for her outstanding achievements in songwriting, to name a few – with her distinct five-octave vocal range, prolific songwriting, and producing talent, Mariah is truly the template of the modern pop performance. Mariah’s ongoing impact has transcended the music industry to leave an indelible imprint upon the world at large. She made her entry into the world of independent film with her landmark performance in “WiseGirls” starring alongside Academy Award winner Mira Sorvino and Melora Walters. In 2009, Mariah was recognized with the Breakthrough Performance Award at the Palm Spring International Film Festival for her critically acclaimed role in Lee Daniels’ “Precious.” Mariah went on to appear in Daniels’ stellar ensemble piece “The Butler” (2013). A Congressional Award recipient, Mariah has generously donated her time and energy to a range of philanthropic causes near to her heart including Save the Music, the Make-A-Wish Foundation, World Hunger Relief, and the Elton John AIDS Foundation, among many others. A tremendous supporter of children’s charities, both domestic and international, Mariah founded Camp Mariah in partnership with the Fresh Air Fund, a retreat for inner city children to explore career development. Mariah is represented by Roc Nation, CAA and Imprint PR. www.mariahcarey.com

About Toys For Tots:

Toys for Tots, a 72-year national charitable program run by the U.S. Marine Corps Reserve, provides happiness and hope to less fortunate children during each Christmas holiday season.  The toys, books and other gifts collected and distributed by the Marines offer these children recognition, confidence and a positive memory for a lifetime.  It is such experiences that help children become responsible citizens and caring members of their community.  Last year the Marine Toys for Tots Program fulfilled the holiday hopes and dreams of 7 million less fortunate children in over 800 communities nationwide.  Since 1947 over 258 million children have been assisted. The Marine Toys for Tots Foundation is a not for profit organization authorized by the U.S. Marine Corps and the Department of Defense to provide fundraising and other necessary support for the annual Marine Corps Reserve Toys for Tots Program.  For more information, visit www.toysfortots.org.