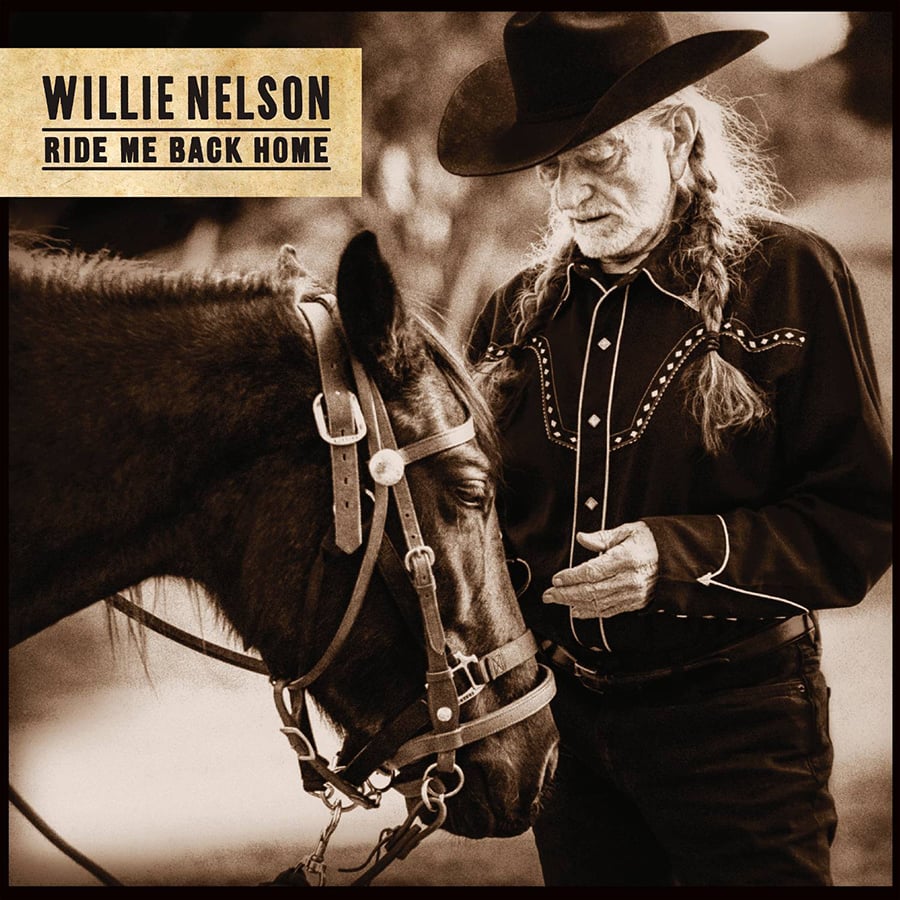 Legacy Recordings, a division of Sony Music Entertainment, will release Ride Me Back Home — Willie Nelson’s new studio album (and 13th for the label)–on Friday, June 21. Ride Me Back Home will be available on CD, vinyl and digital formats as well as part of exclusive merch bundles on Willie’s web store. The album’s title track is being released today.

Pre-order and hear “Ride Me Back Home” here:https://WillieNelson.lnk.to/RIDE

The title track “Ride Me Back Home” is Willie’s sublime rendering of a song co-written by Nashville Songwriters Hall of Fame member Sonny Throckmorton expressing a love for horses and their spirituality. “Sonny lives right by Willie’s Luck studio,” longtime friend/producer/musical compadre Buddy Cannon pointed out. “He said he wrote that song because he was over there and saw Willie’s horses. I don’t even know if Willie knows that or not.” The horses to which Cannon refers are a group of more than 60 that Willie has adopted over the years, rescuing them from the slaughterhouse and giving them a home on his “Luck” ranch.

“With Willie Nelson’s Ride Me Back Home, the artist rounds out a trilogy about mortality that began in 2017 with God’s Problem Child and was followed in 2018 with Last Man Standing,” observed American writer and music journalist Mikal Gilmore. “Ride Me Back Home, though, brings a different component of mortality into view: empathy.” A reflective, upbeat journey through life, love and time’s inescapable rhythms viewed from Willie’s inimitable perspective, Ride Me Back Home finds the artist in full appreciation of every moment, sharing his experience in songs he’s written and songs he loves to sing. This is the 13th album that Cannon has produced for Willie in a little over a decade and the album debuts three new songs co-written by the pair: “Come On Time,” “Seven Year Itch” and “One More Song to Write.”

Alongside his new compositions on the album and the title track (which Throckmorton co-wrote with his daughter Debby, Joe Manual & Lucinda Hinton), Willie pays musical tribute to a variety of pop and country songwriters and performers, covering Billy Joel (“Just the Way You Are”), Mac Davis (“It’s Hard to Be Humble” with Lukas Nelson and Micah Nelson) and a pair of songs by the late American country/folk artist Guy Clark (“Immigrant Eyes” and “My Favorite Picture of You,” the title song from Clark’s 2014 Grammy-winning Best Folk Album).

Filling out Ride Me Back Home are Willie’s soulful interpretation of Buzz Rabin’s classic country composition “Maybe I Should Have Been Listening,” his take on Skip Denenberg & Dan “Bee” Spears’ “Nobody’s Listening” (before his death in 2011, bassist Spears had played with Willie for more than forty years) and the artist’s 2019 return to “Stay Away From Lonely Places,” an outlaw country deep cut Willie first wrote and recorded for his 1972 album The Words Don’t Fit The Picture. “I’m the biggest Willie Nelson fan there is, and I thought I knew every song that he ever did. But I had never heard that song. It sounded totally new to me,” said Buddy Cannon, who lobbied to get Willie to revisit the track. “He’s a born troubadour. It’s the greatness: That early genius that was him and his songs is still there.”

Willie Nelson – Ride Me Back Home

03. My Favorite Picture of You

06. Stay Away From Lonely Places

10. It’s Hard To Be Humble (with Lukas Nelson and Micah Nelson)

11. Maybe I Should’ve Been Listening