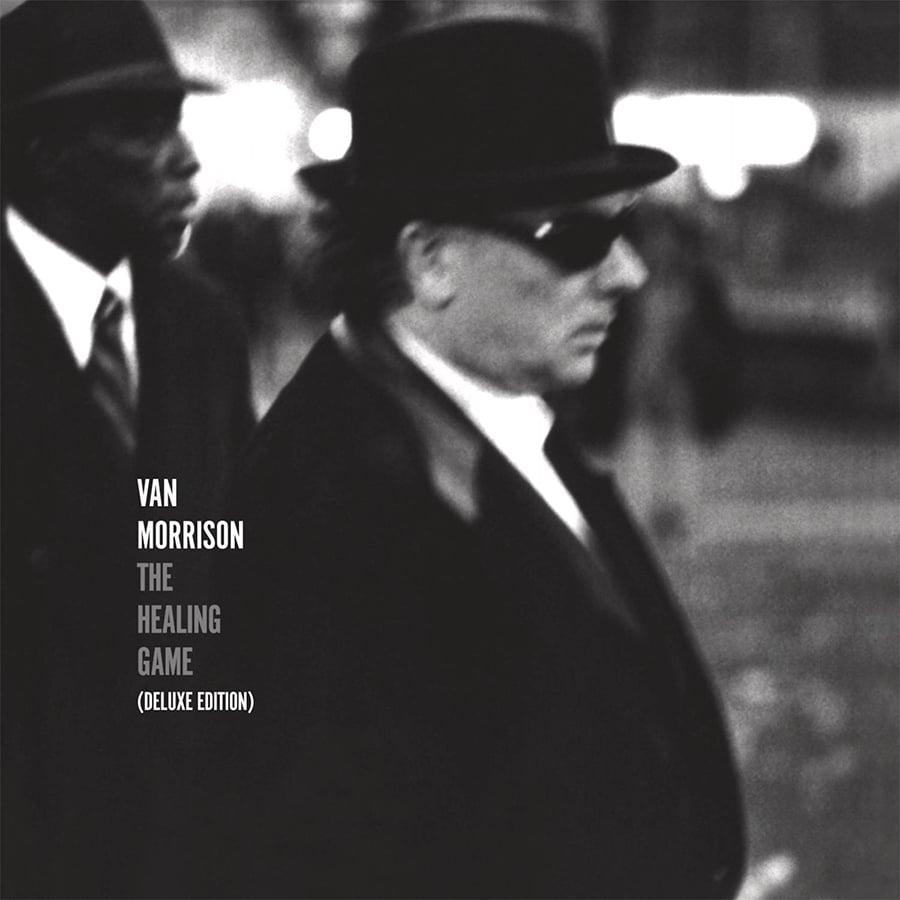 Van Morrison – The Healing Game (Deluxe Edition) will be available in 3CD plus digital formats in addition to a 1LP 12″ vinyl edition of the (long out-of-print) original album (minus the bonus tracks) and may be pre-ordered now: https://vanmo.lnk.to/HealingGameMontreuxLW

The Deluxe Edition’s first disc, “The Original Album Plus…” features the ten classic recordings that form the core of The Healing Game in addition to five bonus tracks, previously issued on singles or compilations, assembled together here for the first time: “Look What the Good People Done,” “At the End of the Day,” “The Healing Game,” “Full Force Gale ’96” and “St. Dominic’s Preview.”

“Disc 2 – Sessions & Collaborations” includes formative early versions of “The Healing Game” and “Fire in the Belly” and a variety of previously unreleased recordings including a jazz version of “The Healing Game,” the full length version of “Sometimes We Cry,” a cover of “A Kiss to Build a Dream On” and several previously unissued collaborations with rock & roll guitar hero Carl Perkins (“Boppin’ the Blues,” “Matchbox,” “My Angel,” and “All By Myself”). Disc 2 showcases blues legend John Lee Hooker on two tracks–“Don’t Look Back” and “The Healing Game”–from Hooker’s 1997 album Don’t Look Back. Produced by Van Morrison and released the same day (March 4, 1997) as The Healing Game, Don’t Look Back took home the Best Traditional Blues Album Grammy in 1998 while the title track won Best Pop Collaboration with Vocals. Disc 2 of The Healing Game (Deluxe Edition) closes with Van collaborating with skiffle king Lonnie Donegan on a definitive interpretation of Jimmie Rodgers’ “Mule Skinner Blues.”

“Disc 3 – Live at Montreux 17 July 1997” finds Van at the peak of his on-stage powers soulfully roaring through an extraordinary live set featuring songs from The Healing Game alongside hits and personal favorites from his catalog; covers of Ray Charles (“Fool For You”), Anthony Newley (“Who Can I Turn To (When Nobody Needs Me”) and Sly Stone (“Thank You (Falettinme Be Mice Elf Agin))” and more. A much-sought-after concert performance, Van Morrison’s Live at Montreux recording is officially available for the first time–with pristine state-of-the-art audio–on The Healing Game (Deluxe Edition).

The Healing Game marked a liminal turning point for Van Morrison as he entered his fourth decade as a professional musician. Following a period of crafting romantic ballads that found mainstream success—including “Someone Like You,” “Have I Told You Lately” and “Days Like This” (featured in the film As Good As It Gets)—Van felt compelled to revisit the jazz and rhythm and blues-inspired music that infused his earliest works with Them and as a solo artist in the late 1960s.

For this fresh phase in his career, Van assembled a new band featuring such heavy hitters as saxophonist Pee Wee Ellis (formerly of James Brown’s band), British jazz/blues legend Georgie Fame and bassist Alec Dankworth (who at the time had completed several years in Dave Brubeck’s touring band). With these sidemen, Morrison dove back into jazz with the bebop-inspired How Long Has This Been Going On? (1995), recorded at London jazz club Ronnie Scott’s, and Tell Me Something: The Songs of Mose Allison (1996), a tribute to the influential American jazz-blues pianist. Following these jazz-related releases, Morrison and his band recorded a visionary new album of 10 originals. The album reinforced Morrison’s reputation as an artist ready, willing and eager to pursue his muses to new and unexpected places.

2. Fire in the Belly

5. Piper at the Gates of Dawn

11. Look What the Good People Done

7. A Kiss to Build a Dream On (previously unissued)

14. All By Myself – Carl Perkins & Van Morrison (previously unissued)

3. Tore Down A La Rimbaud

8. I’m Not Feeling It Anymore

12. Tupelo Honey/Why Must I Always Explain