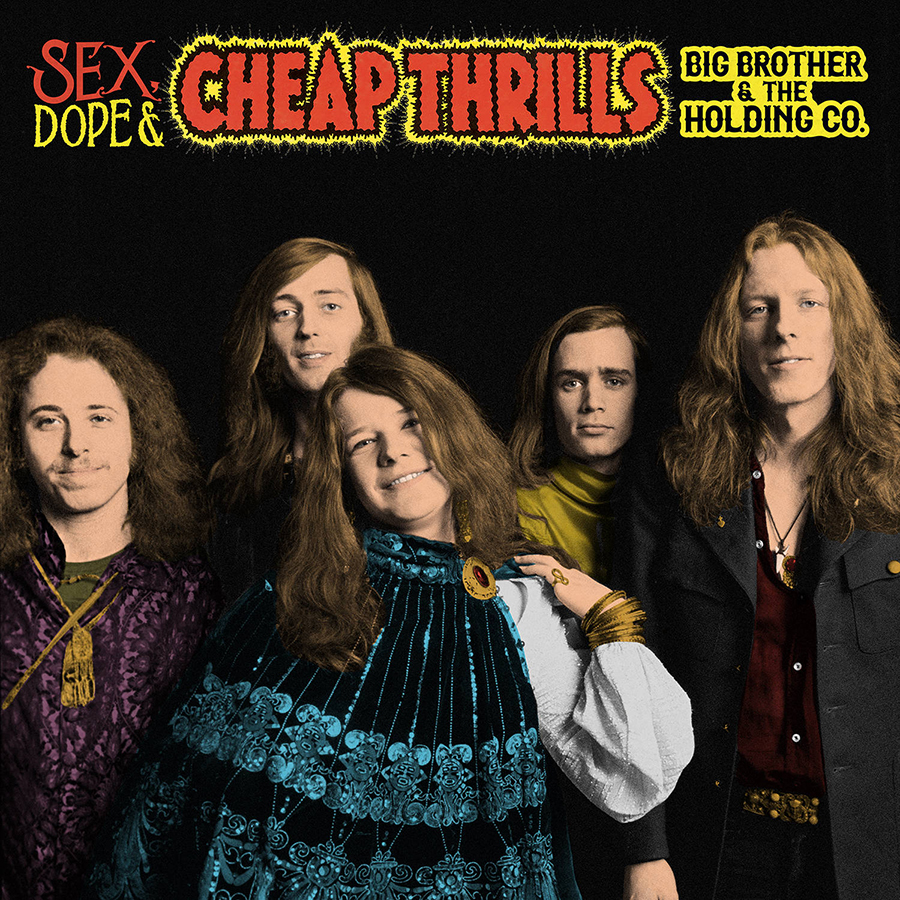 Available in 2CD and 2LP Configurations on Friday, November 30

“Then I heard that voice. Good Lord–spontaneous explosions of every emotion–no holds barred….” – Grace Slick

Released at last under its original title (nixed by the label as too controversial a half century ago),Sex, Dope & Cheap Thrills restores the band’s vision and intent in an essential new collection of 30 rare performances including 29 studio outtakes (25 previously unreleased) from the mythic 1968 sessions that generated Big Brother & The Holding Company’s Cheap Thrills, the breakout album that introduced Janis Joplin to the world. Sex, Dope & Cheap Thrills debuts a previously unreleased live performance of “Ball and Chain,” recorded live at Winterland Ballroom on April 12, 1968.

Sex, Dope & Cheap Thrills includes liner notes penned especially for this commemorative release by Jefferson Airplane front-woman Grace Slick and Big Brother & The Holding Company drummer David Getz.  “Then I heard that voice,” writes Slick.  “Good Lord–spontaneous explosions of every emotion–no holds barred…. Janis had no trouble sliding from the apron clad fifties into the no bra sixties.  We all took every advantage of the new freedoms, and it was reflected in the music…. This album, because of its worldwide success, made it possible for everybody to hear the phenomenon that was previously limited to the San Francisco Bay Area. Now, a new generation gets the ‘Cheap Thrills’ experience to enjoy.”

Sex, Dope & Cheap Thrills will be available in 2CD (30 tracks) and 2LP (16 tracks) configurations and may be pre-ordered now: https://lnk.to/SexDopeCheapThrills

Originally released on August 12, 1968, Cheap Thrills was an out-of-the-box smash, a #1 album that–building on the heat she’d generated at the 1967 Monterey Pop Festival–established Janis Joplin as rock’s foremost primordial psychedelic soul singer, a musical archetype whose influence has never waned. Sex, Dope & Cheap Thrills revisits those 1968 sessions and shines a new light on the genius of Janis Joplin and the incredible chemistry she shared with her bandmates in Big Brother & The Holding Company.

The original Cheap Thrills featured dubbed-in crowd noise to create the sonic illusion of a live album, though only “Ball and Chain” was actually recorded in concert. An alternate live version of the song–recorded at The Winterland Ballroom in San Francisco on April 12, 1968–is included on Sex, Dope & Cheap Thrills. The album was the culmination of several years of hard work for the psychedelic quintet, consisting of Joplin on lead vocals, Sam Andrew and James Gurley on guitar, Peter Albin on bass and Dave Getz on drums. In 1967, a year after recruiting Joplin, they released their self-titled debut album while continuing to build a devoted fan base in their native San Francisco and the Bay Area.

A performance at the Monterey Pop Festival in June 1967 earned Big Brother national recognition, with Joplin’s unrestrained full-tilt delivery bringing audiences to their feet. Clive Davis, president of CBS Records, attended the group’s performance and signed Big Brother & The Holding Company to Columbia Records. Produced by John Simon, Cheap Thrills was the pure distillation of the band’s raw talent and bleeding-edge instrumental prowess, with compelling originals (“I Need a Man to Love,” “Combination of the Two”) as well as covers of jazz and blues favorites (George and Ira Gershwin’s “Summertime,” Big Mama Thornton’s “Ball and Chain,” and, notably, “Piece of My Heart,” a now-classic soul ballad, penned by Jerry Ragovoy and Bert Berns, that became one of Janis’ signature songs and her top charting single during her lifetime).

Cheap Thrills spent a combined total of eight weeks atop the Billboard 200 in two runs during October, November and December of 1968.

“Cheap Thrills seems to have stood the test of time,” writes Dave Getz in his notes for Sex, Dope & Cheap Thrills. “It might be because it is arguably the greatest work by a great artist, Janis Joplin. It is certainly the greatest and closest representation of what Big Brother & The Holding Company was as a band and I would add to that argument that Big Brother/Janis as a band, and as a SOUND, was the embodiment of the San Francisco, psychedelic, counter-culture of the 1960s…. On another, more metaphorical level and in the perspective created by the distance of fifty years, I see Cheap Thrills as a time capsule for the year 1968. That year might have been the moment when it all came to a boil for Big Brother, Janis and the entire 1960s, acid-infused, revved-to-the-max, counter-culture generation.”

All tracks previously unreleased except*