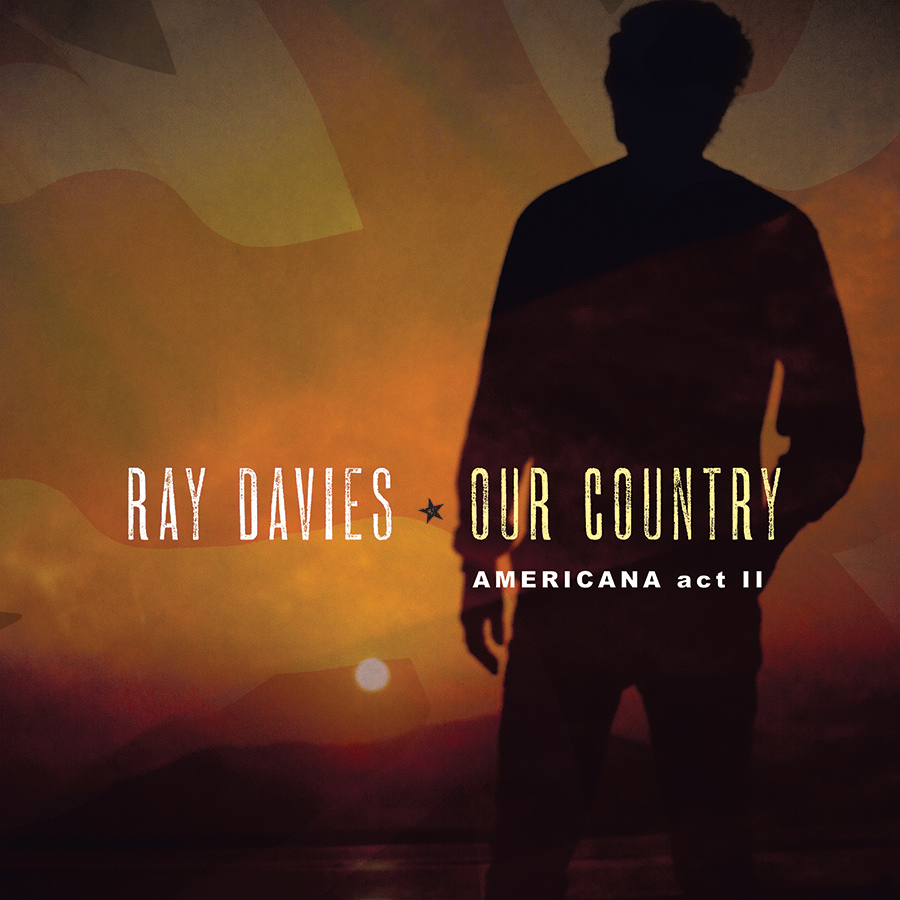 BACKED ONCE AGAIN BY THE JAYHAWKS PLUS UK MUSICIANS AND CHOIR

“OUR COUNTRY follows my journey across America; through endless tours not just to reclaim the Kinks’ career, but to rediscover the country that offered me my earliest inspirations.” -Ray Davies

The first track, “Our Country,” premiered today at Rolling Stone.

The continuing story of The Kinks co-founder’s journeys through America, as depicted in his 2013 memoir Americana and last year’s album of the same name, OUR COUNTRY: AMERICANA ACT II is an album borne from Davies’ vision of America — how it shaped him and evolved through the years. His reflections on his experiences in America instigate personal reformation, and eventually rediscovery and celebration of his own origins.

OUR COUNTRY, like its predecessor, was recorded at the legendary Konk Studios in London with guitarist Bill Shanley and The Jayhawks once again serving as Davies’ backing band plus a group of UK musicians. The album picks up several intriguing musical threads from Davies’ extraordinary songwriting catalog, from the opener “Our Country” – which is developed from a melodic theme heard in  AMERICANA’s title track – to reinterpretations of songs inspired by America and written for various projects over the years, including “Oklahoma USA” (first heard on The Kinks’ MUSWELL HILBILLIES), “The Real World” (from 2007’s acclaimed solo album, WORKING MAN’S CAFÉ) and “The Getaway” (from 2006’s OTHER PEOPLES LIVES).

Davies’ first all original solo work in a decade, AMERICANA was greeted with international critical acclaim upon its release last year. “The Kinks legend uses AMERICANA to blaze a path through both America’s rock ’n’ roll history and his own,” raved Pitchfork. “Its back-to-basics energy and prosaic storytelling make it Davies’ best solo album in years.” Mojo called it “his most personal album to date” and Uncut said that “AMERICANA is a deeply satisfying reminder that Davies remains a songwriter with a huge reach but few equals”. “There’s a lot to chew on,” wrote American Songwriter, “but AMERICANA is a first class offering from one of the UK’s most feted songwriters and a worthy entry into Ray Davies’ rightfully esteemed catalog.” “AMERICANA is a big story,” wrote Consequence of Sound, “and it’s not one with tidy resolutions or easy fixes. But Davies is far less preoccupied with trying to tie up the loose ends than he is pointing out America’s dual narratives. There is the fantasy and there is real life, and more often than not they bleed over into one another. And once again, it took the efforts of one of our greatest living songwriters to spell it all out for us.”

Ray Davies is currently working on a theatre/film piece based on both AMERICANA and OUR COUNTRY. Watch this space for further developments.