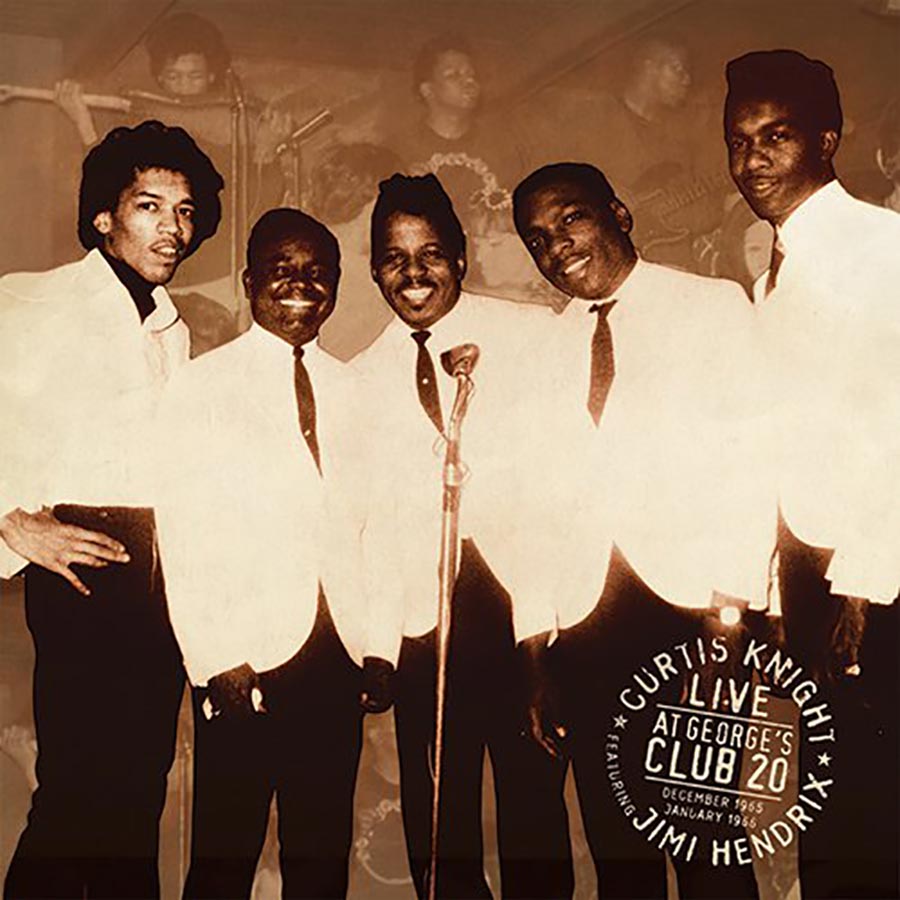 February 28th, 2017- New York, NY- Dagger Records has released Curtis Knight [featuring Jimi Hendrix]: Live At George’s Club 20 1965 & 1966 on CD, to be followed by a double vinyl LP version for Record Store Day on April 21. Never officially released in the U.S. before, these recordings showcase Jimi’s explosive guitar work and lead vocal performances that Animals bassist Chas Chandler witnessed less than a year before becoming his manager and moving him to England to form the Jimi Hendrix Experience.

New York area bandleader Curtis Knight met Jimi Hendrix, then known as Jimmy James, in October 1965 and recruited the budding guitarist for his pre-Squires band the Lovelights. At the cusp of turning 23, Hendrix was already somewhat of a veteran, having already toured and recorded with, among others, the Isley Brothers and Little Richard. These raw recordings, made at George’s Club 20 in Hackensack, NJ on December 26, 1965 and January 22, 1966, capture the Lovelights (filled out with bassist Ace Hall, drummer Ditto Edwards and saxophonist Lonnie Youngblood) tearing through popular rock and roll, soul and blues songs of the day. Chris Kenner’s “Land of 1000 Dances,” Ray Charles’ “What I Say,” “Mercy Mercy” by Don Covay and “I’ll Be Doggone,” the Marvin Gaye hit, are featured in their repertoire, in addition to two songs Jimi would go on to play with the Experience: “Driving South” by Albert Collins and Howlin’ Wolf’s “Killing Floor.”

Even in these recordings, Jimi’s personality, stagecraft and humor are evident throughout. More so was his burgeoning skill as a guitarist. “Jimi wasn’t someone coming and learning on the gig. He was very seasoned. He had knowledge of all the hit songs. He had ‘em

By the spring of 1966, Jimi Hendrix and Curtis Knight had parted ways. Hendrix would soon resurface in Greenwich Village, occasionally fronting his own group The Blue Flames, as well as performing with artists such as John Hammond Jr. By the end of the year, he was in London with a fully formed Jimi Hendrix Experience, on the brink of international stardom.

Soon after Jimi Hendrix became a household name, these live Curtis Knight recordings began to surface on shoddily produced bootlegs. Longtime Hendrix recording engineer Eddie Kramer just recently restored the audio by removing all overdubs and effects, so fans can now hear what Chas Chandler did in that nightclub over a half century ago. Bernie Grundman mastered Live At George’s Club 20 1965 & 1966 for optimum audio fidelity.

Live At George’s Club 20 1965 & 1966 is a significant addition to the Dagger Records catalog that now numbers sixteen releases. The imprint was established as a resource for devotees who want to dig deeper than the standard Jimi Hendrix catalog available through Experience Hendrix/Legacy Recordings. Since 1998 Dagger has been releasing titles such as Morning Symphony Ideas, Hear My Music and Live In Ottawa, which feature inspired performances and reveal home and studio recordings that may or may not meet the technical criteria and high sonic standards Hendrix himself established over the course of his short, but spectacular career. These informative ‘bootleg’ releases are properly annotated, complete with photos, liner notes and the best possible sonic quality and offer additional insight into Hendrix’s musical mastery.

“This release offers great insight into an important period in Jimi’s musical development,” explains Janie Hendrix, CEO of Experience Hendrix L.L.C. and sister of Jimi Hendrix. “We’re delighted that our Dagger label is able to put these recordings in historical context.”

4) Get Out Of My Life Woman

9) Baby What You Want Me To Do

ABOUT EXPERIENCE HENDRIX, L.L.C.
Founded by James ‘Al’ Hendrix, Jimi’s father, in 1995, Experience Hendrix, has been managed since its inception by the family members handpicked by Al during his tenure as Chairman. It is the official family company charged with managing the music, name, image and likeness of Jimi Hendrix. As a part of their daily operations, Experience Hendrix and Authentic Hendrix oversee Jimi’s timeless legacy on a worldwide basis.