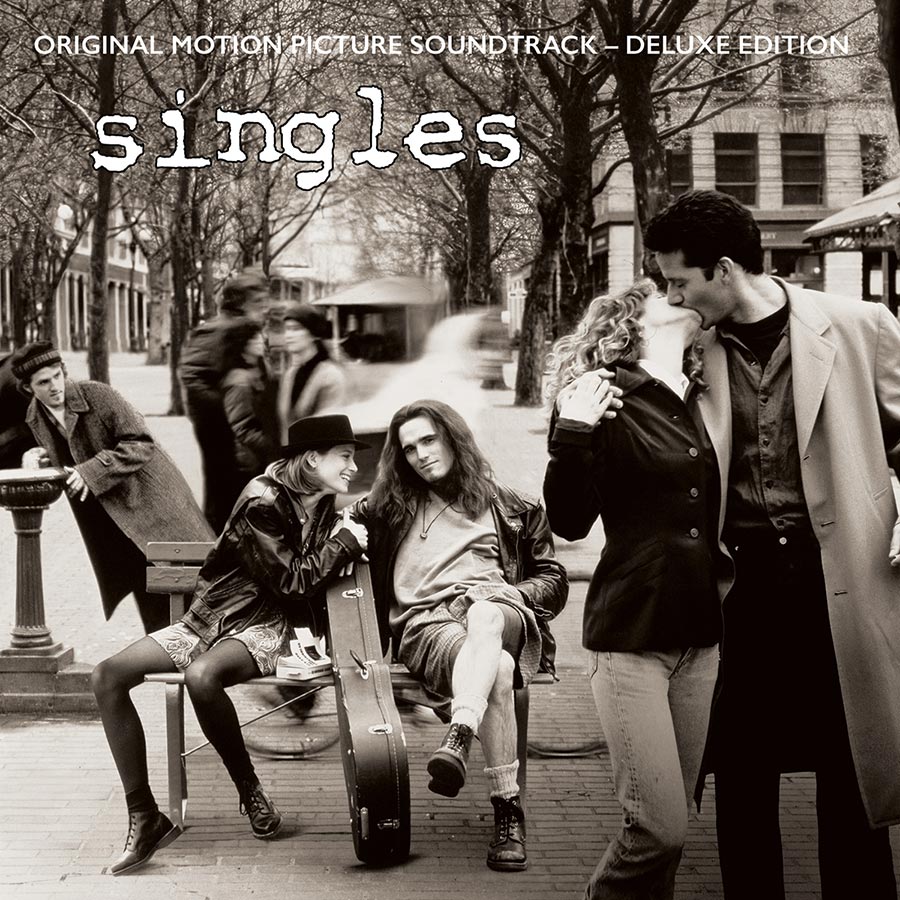 January 26, 2017- New York, NY– Epic Soundtrax and Legacy Recordings, the catalog division of Sony Music Entertainment, will celebrate the 25th anniversary of Cameron Crowe’s groundbreaking romantic comedy, “Singles,” with the release of a newly expanded and remastered edition of the Singles: Original Motion Picture Soundtrack album on Friday, May 19.

The newly expanded Singles: Original Motion Picture Soundtrack is being offered in 2CD and 2LP configurations and is available for pre-order now.

The 2LP edition features the album’s original 13 tracks newly mastered and freshly pressed across four sides of collectible 12″ vinyl. The bonus CD of rarities and unreleased tracks (Disc 2 in the 2CD set) is included as a special insert in the 2LP 12″ vinyl package.

The newly released bonus CD (included in both the 2LP and 2CD deluxe editions of the Singles: Original Motion Picture Soundtrack album) features previously unreleased recordings by Chris Cornell, Mike McCready, Mudhoney, and Paul Westerberg in addition to rarities such as Cornell’s 1992 EP Poncier (debuting an early rendition of “Spoonman”) and tracks from the film not included on the best-selling soundtrack album first released on June 30, 1992. The success of “Singles” helped establish a then-emerging new generation of rock artists–including 2017 Rock & Roll Hall of Fame Inductees Pearl Jam, Alice In Chains and Soundgarden–as musical forces to be reckoned with.

The expanded edition of the “Singles” soundtrack includes, for the first time on CD, “Touch Me I’m Dick,” the signature track from “Singles” performed by Citizen Dick (a fictional band created for the film featuring frontman Matt Dillon backed by Pearl Jam’s Eddie Vedder, Stone Gossard and Jeff Ament).

The new Epic Soundtrax/Legacy Recordings edition of the Singles: Original Motion Picture Soundtrack includes liner notes–and a track-by-track description of the album’s music–written for especially for this collection by Cameron Crowe, the screenwriter and director of “Singles.” The newly expanded edition of the film’s soundtrack is produced by Danny Bramson and Cameron Crowe and mastered by Mike Piacentini at Battery Studios, New York.

Set in Seattle at the beginning of the 1990s, Crowe’s film featured music by relatively obscure (at that time) bands like Pearl Jam, Alice In Chains and Soundgarden, providing an introduction to an emerging grunge rock music scene for a welcoming mainstream audience. The film became a cult classic while the soundtrack achieved RIAA double platinum status in the US.

Crowe’s groundbreaking film chronicling the lives of Seattle’s twentysomethings touched a nerve in the culture while the movie’s best-selling soundtrack–with tracks from new artists and classic rockers–provided a critical overview of the roots of grunge and the essential contributions of Seattle rock. Alongside new songs like Alice In Chains’ “Would?” and Pearl Jam’s “Breath” and “State of Love and Trust” stood the Jimi Hendrix Experience’s “May This Be Love” and a breathtaking cover of Led Zeppelin’s “The Battle of Evermore” performed by The Lovemongers (a musical side project created by Heart’s Ann Wilson and Nancy Wilson).

The first edition of the Singles: Original Motion Picture Soundtrack was originally released on June 30, 1992 and became a chart-topping best-seller three months prior to the theatrical release of the film. The soundtrack included music from key bands from the Seattle music scene–including Alice In Chains, Pearl Jam and Soundgarden–while Paul Westerberg, in his first solo recordings outside The Replacements–contributed two songs and provided the score for the film. Smashing Pumpkins were also featured on the soundtrack with the song “Drown.”

“The album itself was always designed to be sort of an anti-soundtrack, more like a souvenir and a simple mix-tape of some of Seattle’s finest,” said Cameron Crowe. “It really is and was a tribute to those hard-working bands that welcomed me to their city with open arms, and the music so many still love so much. Anyway, here we are now revisiting ‘Singles,’ the film, as well as the soundtrack you hold in your hands, expanded with a special tip of the hat to the fans of the original release. Included are unreleased and raw elements that helped shape the experience of making the movie back in 1991. Hope you enjoy the trip back as much as I did – Viva Seattle!”

25 years ago, the film “Singles” and its soundtrack worked together to bring the underground Seattle music scene to the forefront of mainstream consciousness. The album was among the first top-selling movie soundtracks of the 1990s to showcase new material from emerging contemporary bands. The expanded edition of Singles: Original Motion Picture Soundtrack is cause to celebrate anew the radical rock sounds that radiated out of the American Northwest a quarter century ago and changed pop music forever.