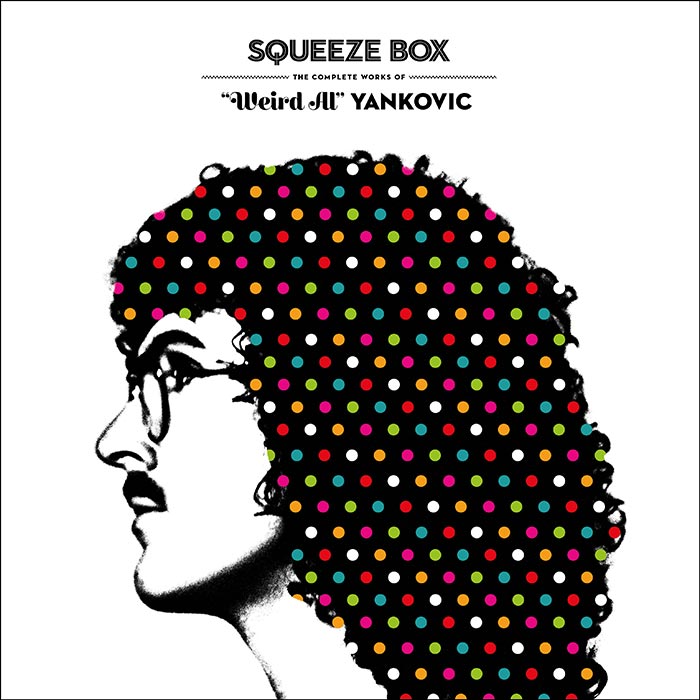 The ultimate tribute to one of the most prolific musical careers of the last four decades, Squeeze Box features all 14 of Weird Al’s studio albums remastered on CD, 150-gram vinyl and digital, spanning from his debut album “Weird Al” Yankovic (1983) to Mandatory Fun (2014). Mandatory Fun was not only the first comedy album in history to debut at #1 on the Billboard chart, but also the first to even reach that lofty position in over 50 years. Altogether, the albums included in Squeeze Box have earned multiple Grammy awards, as well as dozens of gold and platinum records in the U.S., Canada and Australia.

Six of these albums will make their debut on vinyl as part of Squeeze Box. Each has been newly remastered by Grammy Award-winning engineer Mark Wilder and personally approved by Yankovic. An Al-curated 15th bonus disc, Medium Rarities, features specially selected non-album tracks from across his remarkable career.

Fans can pre-order the collection now on “Weird Al” Yankovic’s campaign page. The leaders in direct-to-fan platforms, PledgeMusic allows artists to get more personal with their fans, offering pledgers behind-the-scenes updates and items not available anywhere else. Pledgers who pre-order the Squeeze Box set will receive the AccessPass which offers access to exclusive artist updates, bonus content, and more.

Available in Fall 2017, Squeeze Box comes in a unique package worthy of Weird Al’s inimitable style: an amazing replica of his signature accordion, with each album stored in its bellows. An accompanying 100-page book will feature a trove of rare and unseen photos and memorabilia.

Squeeze Box: The Complete Works of “Weird Al” Yankovic will be sold through an exclusive partnership with Legacy Recordings, the Grammy Award-winning catalog division of Sony Music Entertainment, and PledgeMusic, a direct-to-fan music platform that will offer exclusive content and insight into the making of this one-of-a-kind set. Fans can purchase various bundles featuring signed test pressings and other merchandise available only through the PledgeMusic campaign. Upon pre-ordering the set, fans can check back for videos, images and updates on the project, from a trip to the mastering studio to early looks at the packaging and content.

About “Weird Al” Yankovic
“Weird Al” Yankovic’s pitch-perfect parodies and pastiches of popular music’s greatest acts have earned him millions of fans around the globe. By keeping his finger on the pulse of the pop charts and harnessing the promotional powers of the Internet and social media, Al went from novelty musician and favorite of radio personality Dr. Demento to left-field hitmaker when “Eat It”— a loving parody of Michael Jackson’s “Beat It”—chewed up the charts in 1984 and earned a Grammy Award for Best Comedy Recording. Since then, getting a hit song sent up Weird Al has become a sign of true popularity, whether you’re Madonna (“Like a Surgeon”), Nirvana (“Smells Like Nirvana”), Coolio (“Amish Paradise”) or Lady Gaga (“Perform This Way”).

Now in his fourth career decade – with no signs of letting up – Weird Al has become the most notable comedy musician of the modern era, always holding up a funhouse mirror to the current musical and pop cultural landscapes.

“Children who bought Al’s albums for the hits risked accidentally picking up a broad-ranging musical education in artists, songs and styles they might never otherwise have been exposed to,” Nathan Rabin wrote in Weird Al: The Book. “If they weren’t careful, they just might learn something.”

Weird Al’s Mandatory World Tour, launched in 2015, has taken him across three continents with 200 dates including stops at The Governor’s Ball Music Festival in New York, two nights at The Hollywood Bowl in Los Angeles and a sold-out show at Radio City Music Hall. Currently, Al can be heard as the voice of the title character on Milo Murphy’s Law on Disney XD.

About PledgeMusic
PledgeMusic is a global next generation direct-to-fan platform dedicated to empowering labels and artists to build communities, fund and pre-sell recordings, and provide unique experiences and exclusives throughout the entire music production and promotion lifecycle. PledgeMusic was named as one of The World’s Top 10 Most Innovative Companies of 2015 in Music for “Helping artists and fans get what they want.” – Fast Company – www.pledgemusic.com