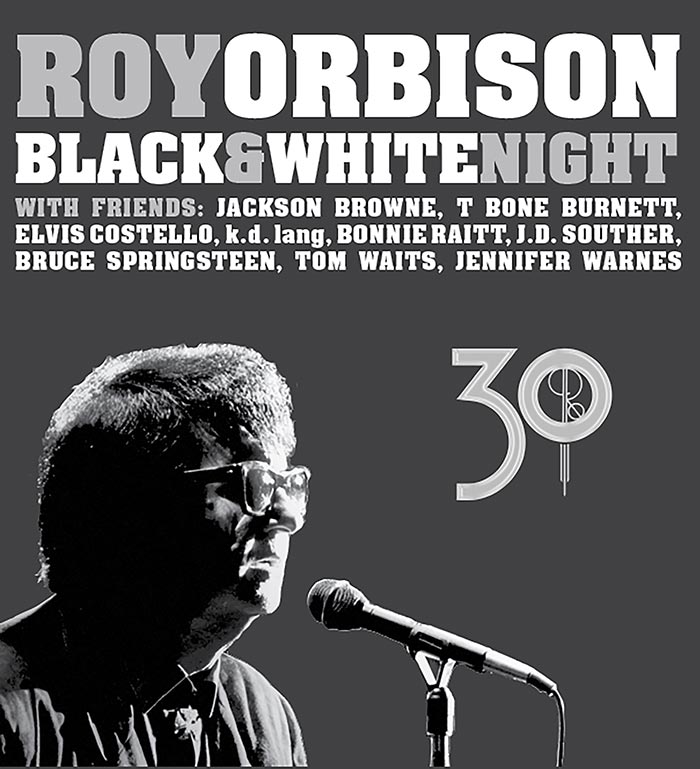 January 12, 2017, New York, NY- To celebrate the 30th anniversary of Roy Orbison’s renowned 1987 televised comeback concert at the Cocoanut Grove night club in Los Angeles, Sony Music’s Legacy Recordings has teamed up with Roy’s Boys LLC, the Nashville-based company founded by the late icon’s sons to administer their father’s catalog and safeguard his legacy. Together, they are releasing Black & White Night 30, a re-imagined, re-edited, remastered and expanded version of the original television special, available both as a CD/DVD set and as a CD/Blu-ray set on February 24. PBS will also air Roy Orbison: Black & White Night 30 during the month of March as part of their special programming.

By the mid-1980s, Roy Orbison had been out of the limelight for quite some time, but his song “In Dreams” was prominently featured in David Lynch’s landmark 1986 noir film Blue Velvet and helped reignite interest in the ‘Big O.’ On September 30, 1987, Orbison, then 51, staged a remarkable comeback with the help of guest musicians whom he had influenced: Jackson Browne, T Bone Burnett, Elvis Costello, k.d. lang, Bonnie Raitt, J.D. Souther, Bruce Springsteen, Tom Waits and Jennifer Warnes. The all-star concert at the Ambassador Hotel’s Cocoanut Grove night club was turned into a television special and broadcast as Roy Orbison & Friends: Black & White Night on Cinemax the following January, less than a year before the icon’s untimely passing.

Black & White Night 30 is NOT a reissue. Because the concert had been shot using seven separate cameras, there were hundreds of hours of footage that went unused and unseen. Roy’s youngest son Alex Orbison and his co-editor Luke Chalk have gone back and re-edited the entire performance so that while the look will be familiar to those that have seen the original version, the vast majority of footage in Black & White Night 30 has never been seen before by the public. Furthermore, the program has been restored to reflect the correct set order, so that viewers can see Roy, brilliantly backed by Elvis Presley’s TCB Band (James Burton, Glen D. Hardin, Jerry Scheff, Ron Tutt), blast through massive Orbison hits such as “Only the Lonely,” “In Dreams” and “Crying” just as the star-studded live audience witnessed them on that very night.

The bonus features included in Black & White Night 30 are remarkable in both size and scope. These include a previously unseen alternate version of Orbison’s biggest hit “Oh, Pretty Woman” and a previously unseen “Blue Angel.” Then, unbeknownst to just about everyone but those that were there in 1987, Roy and friends and the full band regathered onstage after the show had ended and after the audience had left. A ‘secret concert’ of five songs followed and is presented here for the first time. The “secret concert” features alternate takes of “Dream You,” “Comedians,” “Candyman,” “Claudette,” and “Uptown” with shooting stopped only after film ran out in the middle of the latter song. These ‘secret’ performances have been highly sought after by fans for decades. All tracks, including all ‘secret concert’ alternate versions have been freshly remastered by Richard Dodd. The audio for the concert is available on CD with buyers of Black & White Night 30 receiving a download code for access to the audio records of the ‘secret concert.’

Also included is a brand new 33-minute mini-documentary consisting of rehearsal footage and pre and post show interviews with Bruce Springsteen, Elvis Costello, k.d. lang, Bonnie Raitt and Jackson Browne from that night. Absolutely none of this content has ever been released commercially, and until recently, has only been rumored to exist.

Black & White Night 30’s bonus features are capped with a montage consisting of 20 still photos from the show and new photos of show memorabilia, mostly unused and unseen in any context. Liner notes written by son Roy Orbison Jr. are included in the brand new, yet thematically consistent, packaging.

Just as the original Black and White Night was televised almost three decades ago, so too will Roy Orbison: Black & White Night 30, this time as part of PBS special programming.