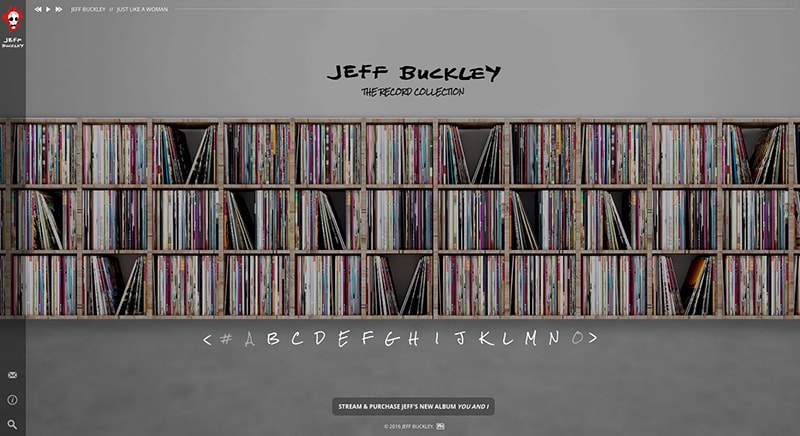 A groundbreaking and intimate online experience, Jeff Buckley Record Collection provides a comprehensive overview of the influences and inspirations that Jeff incorporated into his own music, including You and I, the recently-released collection of his first studio recordings from 1993, now available for streaming and purchase on the site.

Like spending the day with Jeff in his apartment listening to music, the site allows fans to play and share any song from any album in Jeff’s personal collection via 30 second previews or access to Spotify for full song playback. On the site, fans can navigate through Jeff Buckley’s record collection by using arrows and the alphabet. Hovering over album spines reveal album information and the ability to stream music.

About Jeff Buckley
After working more than a decade as a session guitarist in Los Angeles, Jeff Buckley moved to New York City in the early 1990s, gathering a rabid following playing tiny venues, notably Sin-é in the East Village. His repertoire incorporated folk, rock, R&B, blues and jazz. He signed to Columbia Records, home of many of his musical heroes, in October 1992. In February 1993, he went into the studio to create the newly uncovered tracks on You and I. Jeff Buckley only completed one studio album, 1994’s Grace, before his life and career ended with his tragic drowning in Memphis on May 29, 1997.

Though scant, the discography of Jeff Buckley has received universal critical accolades and continues to create new fans and followers drawn to the music of a singular visionary artist whose voice, guitar work, songwriting and interpretative skills transcended all categories.