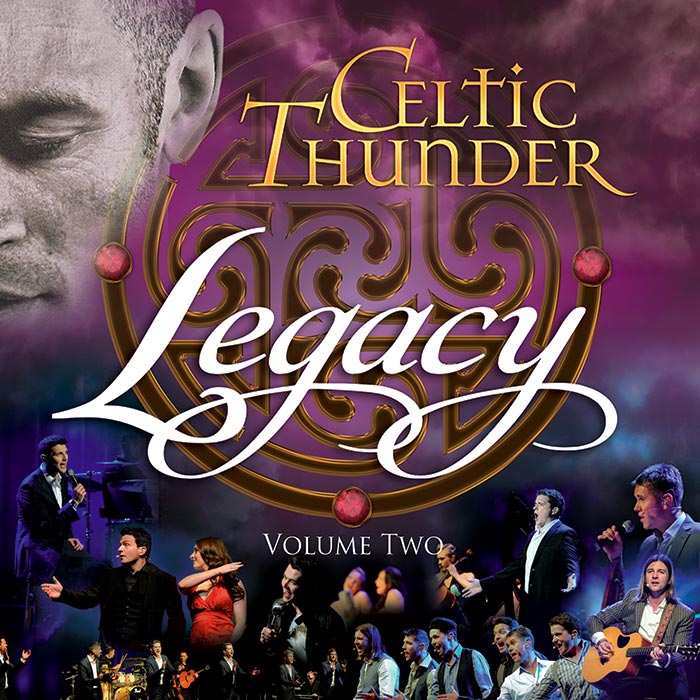 Celtic Thunder’s Legacy, Volume Two is an eagerly-awaited follow up album to the highly acclaimed Legacy, Volume One, released in February of this year.

Since its inception, Celtic Thunder has thrilled audiences the world over with signature vocal harmonies and ensemble productions bringing a new twist to an eclectic repertoire ranging from traditional Irish and folk music to adult contemporary, rock and classical crossover.

Formed in Dublin in 2007 by Producer Sharon Browne, Celtic Thunder is a multi-dimensional musical and theatrical ensemble celebrated around the world for emotionally powerful performances and a state-of-the-art production aesthetic. A stalwart presence on Public Television since 2008, Celtic Thunder remains one of the most popular musical shows on that network to this day, selling over 2 million albums. Moreover, Billboard magazine has named Celtic Thunder the Top World Artist four times in eight years (2008, 2009, 2011 and 2015) and the show has had LPs placed in the World Album Top 10 every year since 2008, raising the bar for Irish music and theatrical productions worldwide.

The Celtic Thunder show also continues to extensively tour worldwide, performing to more than 800,000 fans over the past eight years. Celtic Thunder looks forward to bringing LEGACY on the road in 2016 with a full North America Tour which will run from August-December, calling on 75 cities across 40 states including NY, MA, GA, PA, NV, FL, TX, CA and WA to name but a few.

Celtic Thunder’s official YouTube channel, “Thunder Tube” has seen over 77 million-upload views since the channel’s inception in 2008. Their monthly newsletter The Celtic Times has a readership of 1.2 million and they over 266,000 followers on Facebook. In addition to appearing in nine hugely successful Public Television specials, including the smash hit “Mythology,” Celtic Thunder has performed at the White House for President and Mrs. Obama, at the Pentagon for the Chairman of the Joint Chiefs of Staff as well as on the CBS Saturday Show’s Second Cup Café, the Today Show, and Fox and Friends.