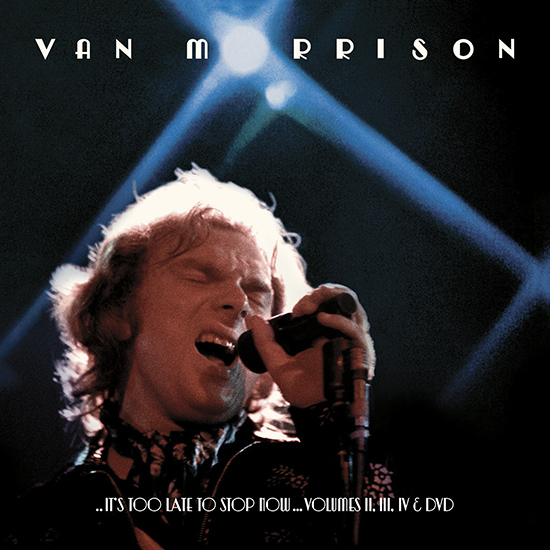 A 3CD/1DVD collection of previously unreleased live concert recordings from Morrison’s mythic 1973 tour with the Caledonia Soul Orchestra, ..IT’S TOO LATE TO STOP NOW…VOLUMES II, III, IV & DVD collates peak performances originally recorded at three venues: The Troubadour in Los Angeles, the Santa Monica Civic Center, and The Rainbow Theatre in London. The set’s DVD features professionally-lensed live footage from the Rainbow Theatre, which originally aired on the BBC in the UK and is now available for the first time as a commercial home video release.

Often cited as one of the best live albums ever made, Van Morrison’s original ..IT’S TOO LATE TO STOP NOW… has been remastered in 24-bit high resolution sound and will be available in both 2CD and 2LP configurations, creating the first vinyl pressing of the album in more than 25 years plus availability of the album to hi-res partners (Mastered for iTunes, HD Tracks, Pono).

Morrison’s highly acclaimed 1973 concert album was compiled from eight sets of live performances–recorded at The Troubadour, the Santa Monica Civic Center and The Rainbow Theatre–and was notably free of any post-performance overdubs or studios “fixes”. ..IT’S TOO LATE TO STOP NOW…VOLUMES II, III, IV & DVD returns to those original performances, first captured on two-inch 16-track analog tapes, and, through the mastery of noted engineer Guy Massey, puts the contemporary listener in the enviable position of being sonically present at each venue. All of the recordings on the new collection have been previously unavailable and none of them overlap with the performances on “Volume I” of ..IT’S TOO LATE TO STOP NOW….

“I am getting more into performing,” said Van Morrison in 1973, during his tour with his newly-formed Caledonia Soul Orchestra. “It’s incredible…. All of a sudden I felt like ‘you’re back into performing’ and it just happened like that…. A lot of times in the past I’ve done gigs and it was rough to get through them. But now the combination seems to be right and it’s been clicking a lot.”

Morrison’s 1973 tour found the Irish soul singer at the peak of his powers, returning to the stage to deliver scorching definitive renditions of the signature material comprising his catalog at the time, from the R&B/rock roots of THEM to the haunting folk soul of Astral Weeks and Moondance in songs like “Gloria,” “Into The Mystic,” “Warm Love,” “Domino” and more. Accompanied by the 11-pice Caledonia Soul Orchestra, featuring two horn players and a four-piece string section, Van Morrison set a new standard for live performance while ..IT’S TOO LATE TO STOP NOW… raised the bar on what was possible on a concert recording.

Each disc on ..IT’S TOO LATE TO STOP NOW…VOLUMES II, III, IV & DVD features previously unreleased performances, newly remixed from the original multitrack recordings by Guy Massey (the acclaimed engineer behind the remasters of The Beatles and Paul McCartney). Massey’s new mixes recreate the sonic atmosphere of each venue, from the standing-room-only intimacy of The Troubadour to the expansive excitement filling the 3,000-seat Rainbow Theatre.

BY VAN MORRISON AND TED TEMPLEMAN