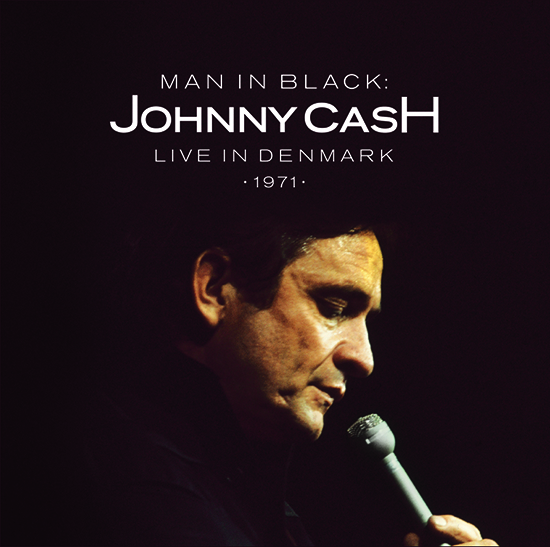 Man In Black: Live in Denmark 1971 Audio Album To Be Released for First Time as 2LP
Set, Pressed on Red and White Vinyl, for Record Store Day
Black Friday (November 27, 2015)

For the first time ever as a CD and digital audio release, Johnny Cash’s Man In Black: Live in Denmark 1971 will be released on Friday, December 4, 2015 and is available for pre-order now.

Also for the first time ever, Johnny Cash’s historic Koncert v Praze (In Prague-Live)–recorded on-stage in Czechoslovakia in April 1978 and documenting his first performance behind the Iron Curtain, among one of the first major American country or popular music artists –will be available worldwide as a stand-alone CD on Friday, February 5, 2016.

Previously commercially available only as a DVD (released in 2006), the audio portion of Johnny Cash’s Man In Black: Live in Denmark 1971 can finally be enjoyed by connoisseurs for the first time as a full-length album on November 27, 2015. A special 2LP set, pressed on red and white vinyl (the colors of the flag of Denmark), is being released exclusively to independent record retailers in celebration of Record Store Day Black Friday 2015.

American musical icon Johnny Cash was at a career highpoint and in the middle of a successful tour of Scandinavia in 1971 when he was asked to star in his own concert special for Danish television. Lensed before a live audience on a Danish TV sound stage, Man In Black: Live in Denmark 1971 captures the essence of a Johnny Cash show of the era, showcasing performances with his touring companions–the Tennessee Three (his backup band) June Carter Cash, the Carter Family, Carl Perkins, and the Statler Brothers–on a setlist of hits, classics and songs-of-the-day including “A Boy Named Sue,” “Sunday Morning Coming Down,” “I Walk the Line,” “Folsom Prison Blues” and more as well as solo selections–“Blue Suede Shoes” (Carl Perkins) and “Flowers on the Wall” (the Statler Brothers)–and duets–“Darlin’ Companion,” “Help Me Make It Through the Night” and “If I Were a Carpenter” (Johnny Cash and June Carter Cash), the song that won the couple the 1971 Grammy Award for Best Country Performance by a Duo or Group with Vocal.

Koncert v Praze (In Prague-Live) was recorded live at the Sportovní hala in Prague on April 11, 1978. Cash was invited to perform by the Czechoslovakian government–who acted as agents, promoters and managers for the four shows in Prague–Johnny Cash and his entourage of 19 secured work permits and set off from Berlin in a small “school bus,” provided by the Czech government, to find out how audiences inside the Soviet bloc would respond to American music. The result, according to the United States ambassador, did more for U.S.-Czech relations in four concerts than he could have accomplished in four years.

Koncert v Praze (In Prague-Live) features Johnny Cash performing 11 songs from his catalog–including “Ring Of Fire,” “Big River,” “Hey Porter,” and other Cash hits–with backing from the Tennessee Three and vocals from the Carter Family.

While in Prague, Johnny played to more than 40,000 audience members over the course of four shows (which sold out in two days). Those historic performances helped provide a turning point in the thawing of the Cold War. For Johnny Cash, not knowing what to expect from an Eastern European audience, the prospect of playing behind the Iron Curtain was daunting. Were they familiar with him, his songs, or American country music? For the standing room only audiences in Prague–who’d heard his music on Radio Free Europe and smuggled Johnny Cash records across their borders–the chance to see America’s legendary Man in Black perform was not only a once in a lifetime opportunity, it was a liberating transformative experience.

The iconic Johnny Cash had been a symbol of nonviolent rebellion and freedom to countless fans around the world; in a time and place where thoughts and actions were strongly policed, Czech natives could finally see Johnny Cash and his band and experience the Western democratic freedoms they embodied.