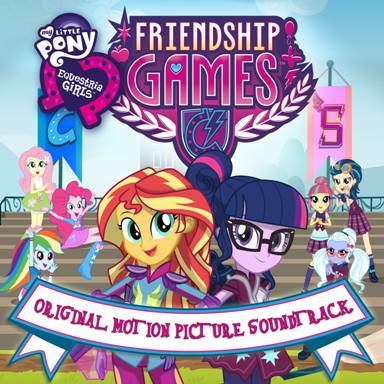 In conjunction with the film debut, Hasbro Studios and Sony Music/Legacy Recordings today announced the global digital release of the accompanying “My Little Pony Equestria Girls Friendship Games” soundtrack. The album features ten original songs from the movie and the same award winning songwriters and voice talent as the “My Little Pony: Friendship is Magic” animated series. Fans can download the album now at: http://smarturl.it/MLPEG3_Music.

“For more than 30 years, the MY LITTLE PONY brand has taken fans around the world on an incredible journey of friendship, and we’re proud to introduce the third chapter in the EQUESTRIA GIRLS adventure,” said Stephen Davis, Executive VP/Chief Content Officer, Hasbro. “The iconic characters, catchy music, and friendly competition of THE FRIENDSHIP GAMES will have pony fans cheering for the WONDERBOLTS and SHADOWCOLTS and rooting for their favorite players.”

The movie will be released in stores on DVD and Blu-ray from Shout! Factory Kids, and available for digital download on iTunes, Google Play, and Amazon on October 13.

About Hasbro
Hasbro (NASDAQ: HAS) is a global company committed to Creating the World’s Best Play Experiences, by leveraging its beloved brands, including LITTLEST PET SHOP, MAGIC: THE GATHERING, MONOPOLY, MY LITTLE PONY, NERF, PLAY-DOH and TRANSFORMERS, and premier partner brands. From toys and games, television programming, motion pictures, digital gaming and lifestyle licensing, Hasbro fulfills the fundamental need for play and connection with children and families around the world. The Company’s Hasbro Studios and its film label, ALLSPARK PICTURES, create entertainment brand-driven storytelling across mediums, including television, film, digital and more. Through the company’s commitment to corporate social responsibility, including philanthropy, Hasbro is helping to build a safe and sustainable world and to positively impact the lives of millions of children and families. Learn more at www.hasbro.com, and follow us on Twitter (@Hasbro.com & @HasbroNews) and Instagram (@Hasbro ).