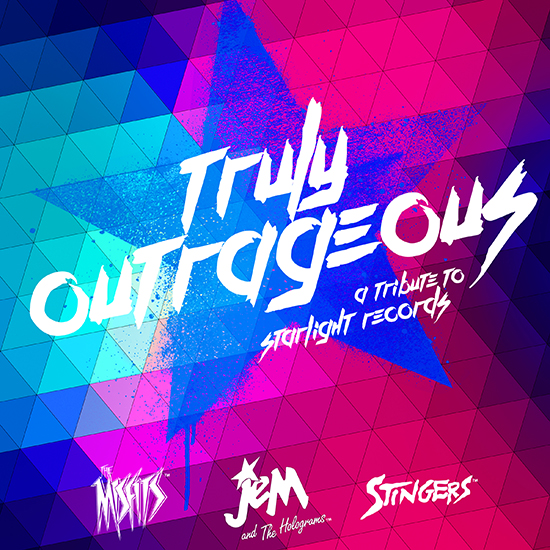 BURBANK, C.A. – August 3, 2015 – Hasbro Studios and Sony Music/Legacy Recordings will release a #TrulyOutrageous tribute album to Hasbro’s 1980s cult classic JEM AND THE HOLOGRAMS on Friday, August 7, featuring modern renditions of hit tracks from Starlight Records very own “JEM AND THE HOLOGRAMS,” “The Misfits,” and “The Stingers.”

The Truly Outrageous: A Jem and the Holograms Tribute is a contemporary salute to one of Hasbro’s most successful animated television series of the 1980s. The digital-only album provides a showcase for some of today’s hottest up-and-coming artists to perform new versions of 12 classic songs first heard during the top-rated 65-episode run of the beloved Hasbro JEM AND THE HOLOGRAMS series. It is available to pre-order now at: http://smarturl.it/TrulyOutrageous

“This contemporary spin on the classic hits celebrates the music our longtime fans of JEM AND THE HOLOGRAMS came to love through the original Hasbro animated series while millennials will be thrilled to hear new music from their favorite emerging artists,” said Hasbro’s Chief Content Officer Stephen Davis. “The album serves as a true display of self-expression connected to music, a theme at the heart of JEM AND THE HOLOGRAMS.”

“A generation of kids got their first taste of pop and rock music in the 1980s through the medium of television and the Truly Outrageous music videos presented on Hasbro’s groundbreaking ‘Jem’ animated series,” said Adam Block, President, Legacy Recordings. “Legacy Recordings and Sony Music Entertainment are excited to be working with Hasbro Studios on the release of Truly Outrageous: A Jem and the Holograms Tribute, a brand-new collection of classic songs from ‘Jem’ performed by rising young artists who grew up watching the show.”

Artists contributing to Truly Outrageous: A Jem and the Holograms Tribute include:

“The Truly Outrageous: A Jem and the Holograms Tribute album truly celebrates the past, while envisioning the future,” said album co-producers John Loeffler and Ryan Vaughn. “We wanted to celebrate the iconic sounds of JEM AND THE HOLOGRAMS by making the original music relevant for a whole new generation of fans.”

Truly Outrageous: A JEM AND THE HOLOGRAMS Tribute will be released on Sony Music’s Legacy Recordings.

The original Hasbro animated JEM AND THE HOLOGRAMS television series ran from 1985-1988 and follows Jerrica Benton, whose discovery of Synergy, a powerful computer companion, allows her to transform from co-owner of Starlight Music into a rock star. Teamed with her sister and best friends who form JEM AND THE HOLOGRAMS, the group sets out to make their musical dreams come true.

Hasbro (NASDAQ: HAS) is a global company committed to Creating the World’s Best Play Experiences, by leveraging its beloved brands, including LITTLEST PET SHOP, MAGIC: THE GATHERING, MONOPOLY, MY LITTLE PONY, NERF, PLAY-DOH and TRANSFORMERS, and premier partner brands. From toys and games, television programming, motion pictures, digital gaming and lifestyle licensing, Hasbro fulfills the fundamental need for play and connection with children and families around the world. The Company’s Hasbro Studios and its film label, ALLSPARK PICTURES, create entertainment brand-driven storytelling across mediums, including television, film, digital and more. Through the company’s commitment to corporate social responsibility, including philanthropy, Hasbro is helping to build a safe and sustainable world and to positively impact the lives of millions of children and families. Learn more at www.hasbro.com, and follow us on Twitter (@Hasbro & @HasbroNews) and Instagram (@Hasbro ).