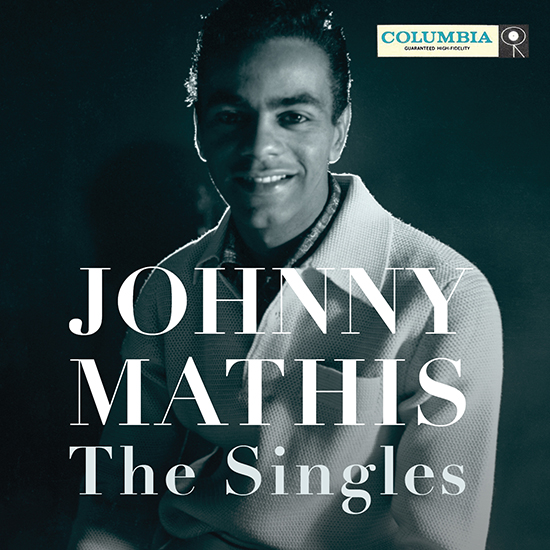 Definitive Four Disc Anthology Brings Together 87 Non-LP and Compilation-Only Tracks including Landmark Hits “It’s Not For Me to Say,” “Chances Are” and “The Twelfth of Never”

Born September 30, 1935, a then-teenaged Johnny Mathis signed with Columbia Records in 1956, first entering the Pop charts with his inaugural Columbia single, “Wonderful! Wonderful!” the following year. Peaking at #14, “Wonderful! Wonderful!” laid the foundation, and predicted the future, for one of the most remarkable careers in pop music history, leading to a string of singles successes which includes perennials like “It’s Not For Me To Say,” “Chances Are,” “The Twelfth Of Never” and many others.

Johnny Mathis: The Singles brings together, for the first time in one anthology, every Johnny Mathis recording which was first issued for the singles market, as well as tracks released exclusively on compilations (1958’s Johnny’s Greatest Hits, considered the first “greatest hits” collection ever created by the music industry, 1959’s More Johnny’s Greatest Hits and 1981’s The First 25 Years–The Silver Anniversary Album).

“When over the course of a career you record as many songs as I have recorded, you tend to for-get a few,” said Johnny Mathis. “Revisiting this music was a complete surprise. I was thrilled beyond belief that some of the songs that I recorded specifically for single records, some of which had simply disappeared once they had been released, are now going to be heard again. Listening to this collection, not only was I amazed at how great it sounds, but I was being re-minded of some songs I had totally forgotten. It is my greatest hope that my fans will share my enthusiasm.”

Johnny Mathis is one of the longest-running artists on the Columbia Records label, with 17 mil-lion RIAA certified album and singles sales in the US alone. A sublime vocalist whose approach to pop music transcends passing fads and trends, Johnny Mathis has performed songs in an incredible variety of styles and categories — from music composed for stage and film to golden era jazz standards, contemporary pop hits, and holiday music both sacred and secular — assuring his reputation as one of the most enduring traditional pop vocalists in music history.

Perhaps best-known for his landmark singles (three of his recordings–“Chances Are,” “It’s Not For Me To Say,” and “Misty”–have been inducted into the Grammy Hall of Fame) Mathis was one of the very first musical artists to embrace the album concept and record fully-realized thematically and sonically coherent collections of songs. His 1958 release, Johnny’s Greatest Hits inaugurated the ongoing “greatest hits” anthology phenomenon becoming one of the most popular albums of all time after spending an unprecedented 490 continuous weeks (almost ten years) on the BILLBOARD Top Albums Chart; 1959’s Heavenly spent 295 consecutive weeks on the same chart. Johnny Mathis was given the Lifetime Achievement Award from the Academy of Recording Arts and Sciences in 2003.

Mathis was a star student athlete in San Francisco who sang weekends at a local jazz club. Columbia Records George Avakian was in attendance during one performance, and famously wired back to the label office: “Have found phenomenal 19-year old boy who could go all the way. Send blank contracts.” After his jazzy debut LP was largely ignored upon its release in 1956, Mathis began working closely with Columbia’s vice-president and producer Mitch Miller to develop an unbeatable lush pop style, picking romantic ballads that made extensive use of his recognizable, vibrato-heavy croon.

During his time on Columbia, Mathis was essentially recording for two markets: the singles market and the albums market. While he would enjoy success in both realms, it was his non-LP singles that first introduced the world to his distinct gifts: in 1957, his first Columbia single “Wonderful! Wonderful!” peaked at No. 14; follow-up “It’s Not For Me To Say” rose to No. 5, and “Chances Are” topped the charts.

Altogether, Mathis logged 18 singles on Billboard’s Top 40 between 1957 and 1963 (and has seen 44 of his singles chart on the Billboard Hot 100 from 1957’s “Chances Are” and 1984’s “Simple”). After a tenure on his own Global label from 1963 to 1967 (initially distributed by Mercury and chronicled by Legacy in The Complete Global Albums Collection box set), Johnny returned to Columbia, where he records to this day.

Disc 2
Small World (#20)
You Are Everything To Me
The Story Of Our Love
The Best Of Everything (#62)
Cherie
Starbright
All Is Well
Hey Love
My Love For You (#47)
Oh That Feeling
How To Handle A Woman
While You’re Young
Jenny
You Set My Heart To Music
Should I Wait
Laurie, My Love
Wasn’t The Summer Short?
There You Are
Christmas Eve
My Kind Of Christmas
Sweet Thursday
One Look
Unaccustomed As I Am
Marianna
I’ll Never Be Lonely Again

Disc 3
That’s The Way It Is
Gina (#6)
I Love Her That’s Why
What Will My Mary Say (#9)
Quiet Girl
Every Step Of The Way
Sooner Or Later
All The Sad Young Men
I’ll Search My Heart
Don’t Talk To Me
Long Winter Nights
Among The First To Know
Night Dreams
Whoever You Are, I Love You
For All We Know
The Last Time I Saw Her
Wherefore And Why
Darling Lili
Sign Of The Dove
Christmas Is…
I Was There

Disc 4
Ten Times Forever More
Evie
Think About Things
If We Only Have Love
This Way Mary
Sometimes
I
Take Good Care Of Her
Walking Tall
Turn The Lights Down
The Very First Christmas Day
Christmas In The City Of The Angels
The Lord’s Prayer
When A Child Is Born
Nothing Between Us But Love
It Doesn’t Have To Hurt Every Time (bonus track)
There! I’ve Said It Again (bonus track)
Three Times A Lady (bonus track)
The Way You Look Tonight (bonus track)