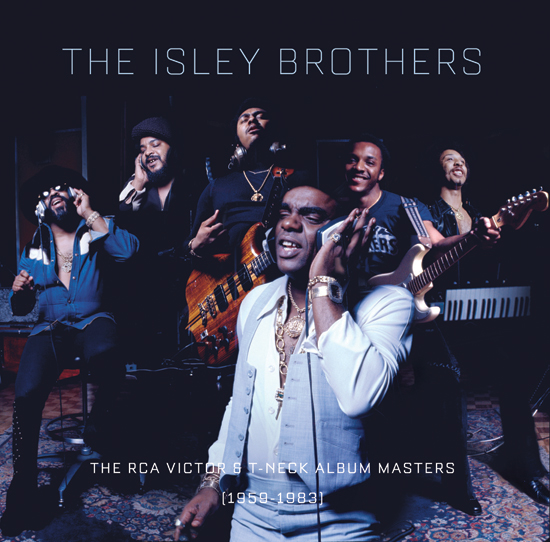 Legacy Recordings, the catalog division of Sony Music Entertainment, is proud to announce the release of The Isley Brothers: The RCA Victor and T-Neck Album Masters (1959-1983), a monumental 23-disc box set, on Friday, August 21, 2015.

An essential library collection chronicling the sonic evolution and abiding achievements of the unprecedented R&B ensemble, The Isley Brothers: The RCA Victor and T-Neck Album Masters (1959-1983) follows The Isley Brothers through their transformation from a 1950’s doo-wop/gospel vocal group into the world’s preeminent R&B rock ‘n’ soul powerhouse party band. As evidenced in this quarter century of recordings, The Isley Brothers absorbed the music and culture surrounding them to continually create contemporary sounds spanning the decades.

The Isley Brothers: The RCA Victor and T-Neck Album Masters (1959-1983) features newly re-mastered versions of The Isley Brothers’ 21 albums released for both labels, nearly all of which are expanded with rare mixes and tracks making their CD and digital debuts. The new collection includes 84 rare and previously unreleased bonus tracks.

This set also includes, released here for the first time in its entirety, the “Great Lost Isley Brothers Album”: Wild In Woodstock: The Isley Brothers Live At Bearsville Sound Studio 1980. First conceived as a “live” double album (with overdubbed crowd noise), this newly restored performance offers an immersive look at a crucial chapter in The Isley Brothers’ history, a pivotal moment in the fusion of rock and funk music in an era fueled by the sound of the Isleys.

By the 1990s, The Isley Brothers’ dominant influence over hip-hop music and culture could be felt at every turn. “Footsteps In The Dark” from 1977’s Go For Your Guns was sampled in Ice Cube’s “It Was A Good Day,” while The Notorious B.I.G.’s “Big Poppa” interpolated the title track of 1983’s Between The Sheets. The Isleys’ flashy fashion sense directly inspired the “bling” aesthetic embraced by rappers everywhere. R. Kelly proclaimed the group his biggest influence, collaborating with them on his Top 5 hit “Down Low (Nobody Has To Know)” in 1995 (featuring Ronald Isley in a career-redefining role as Mr. Biggs in the accompanying video). Kelly’s writing and production for the group continued through the 1990s and 2000s, peaking with Body Kiss which hit No. 1 the Billboard 200 in 2003, a full 44 years since their first hit with “Shout.”

The Isley Brothers’ classic works continue to reach new fans through consistent radio airplay, film and television licenses and samples: in 2015, Kendrick Lamar won two Grammy Awards® for the track “I,” built upon the groove of “That Lady” (from 1973’s 3+3), while singer/rapper Frank Ocean covered “At Your Best (You Are Love)” from Harvest For The World (previously covered by Aaliyah in 1994, who made it a Top 10 hit).

Born and raised in the suburbs of Cincinnati, Ohio, The Isley Brothers–O’Kelly Isley, Jr., Rudolph Isley, Ronald Isley and a fourth brother, Vernon Isley (who died a couple of years after their first incarnation)–began performing as a gospel-based vocal group in 1954. Moving to the New York City area in the late 1950s, The Isley Brothers scored some modest regional chart successes before their fourth single (and first for RCA Victor), “Shout”–written by O’Kelly, Rudolph and Ronald–catapulted them into the pantheon of pop immortality in 1959. One of the most immediately identifiable and infectious party anthems ever written or recorded, The Isley Brothers “Shout”–with its irresistible call-and-response structure–combined gospel heat and doo-wop soul with a high-powered rock ‘n’ roll energy. The much-covered “Shout” was inducted into the Grammy® Hall of Fame in 1999 and placed No. 118 on Rolling Stone’s list of The 500 Greatest Songs of All Time.

The Isleys followed up “Shout” with a variety of tracks (including their Top 20 single, “Twist & Shout,” a song later famously covered by The Beatles).

Perhaps the most musically adventurous vocal ensemble in American pop history, The Isley Brothers were adding rock, funk, R&B, soul and ballad elements into the gospel and doo-wop music at the foundation of their sound.

In the 1960s, while The Isley Brothers bounced between various labels (including Atlantic, United Artists and Motown), they briefly employed a then-unknown Jimi Hendrix (aka Jimmy James) as their lead guitarist, buying him a white Fender Stratocaster guitar and moving him into the Isley home. Though Jimi’s stint with the Isley Brothers was brief, his musical sensibilities remained in the group, with younger brother Ernie Isley carrying the fiery experimental rock ‘n’ soul guitar sound they shared into the Isley Brothers future.

Tired of labels that didn’t fully understand or support their R&B/rock fusion musical vision, The Isley Brothers launched their independent T-Neck imprint with distribution through Buddah Records. At T-Neck, the Isleys finally enjoyed the freedom to make music the way they wanted, recording and producing their own material as well as assisting in the distribution and promotion process. The T-Neck label’s lead single, the irresistible Grammy Award®-winning funk hit “It’s Your Thing,” instantly established the band and label as a commercial powerhouse, its lyric a mantra for the trail The Isley Brothers would blaze in the next decade.

The Isleys’ ever-expanding musical repertoire in the 1970s included funky covers of pop/rock favorites (“Love The One You’re With,” “Lay, Lady, Lay”) that helped spread these songs through urban markets. The group would hit a new peak with the album 3+3 and single “That Lady” in 1973.

With Ernie, Chris and Marvin leading the way creatively, the group pushed the barriers of soul music, bringing funk and laid-back quiet storm into the mainstream and earning the band three gold and seven platinum or multi-platinum albums–including 3+3 (1973), the #1 chart-topping The Heat Is On (1975) and 1983’s Between The Sheets–and 14 Top 10 R&B albums (seven of which hit No. 1). In the world of R&B, only Parliament-Funkadelic and Earth, Wind & Fire have achieved success rivaling the Isley Brothers.

The Isley Brothers have had 19 Top 10 singles (7 of those at #1) in the US Billboard R&B chart, with 16 Isley albums hitting the Top 40. 13 of their albums have achieved RIAA gold, platinum or multi-platinum status. The Isley Brothers were inducted into the Rock and Roll Hall of Fame in 1992. They got their star on the Hollywood Rockwalk in 1997 and were inducted into the Vocal Group Hall of Fame in 2003.

The Isley Brothers, through an unprecedented seven decades, have remained one of the most consistently successful groups of all time. The Isleys were present at the birth of rock and roll, their biggest hits have influenced R&B, rock and roll and funk music from the 1950s onward while their deep grooves helped form the rhythmic backbone of hip-hop, a sound the Isleys would embrace in the 1990s and 2000s.

Still active as a duo of Ronald and Ernie Isley, The Isley Brothers earned a Grammy® Lifetime Achievement Award in 2014. The Isley Brothers: The RCA Victor and T-Neck Album Masters (1959-1983) brings all of their works for the Sony Music family into one impressive package.