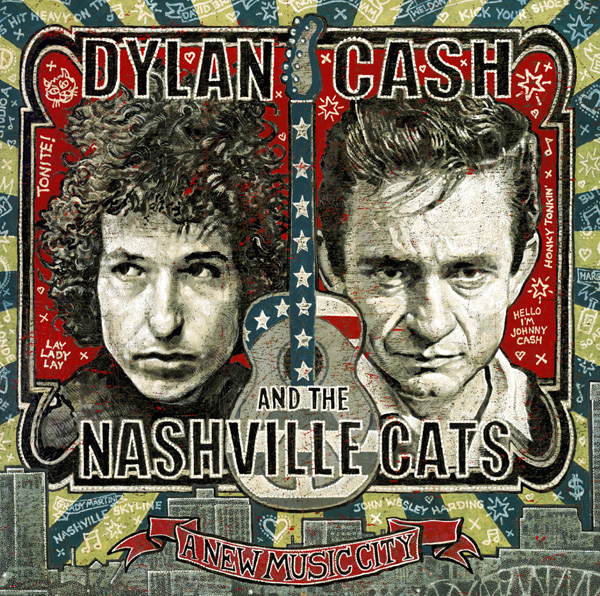 Legacy Recordings, in Association with CMF Records, Set to Release Dylan, Cash, and the Nashville Cats: A New Music City, a 2CD Sonic Companion to Historic Exhibit On Display at Country Music Hall of Fame & Museum in Nashville Through December 31, 2016

Legacy Recordings, the catalog division of Sony Music Entertainment, and Country Music Foundation Records (CMF Records) announce the upcoming release of Dylan, Cash, and the Nashville Cats: A New Music City, a 2CD audio companion to the historic exhibit currently on display at the Country Music Hall of Fame ® and Museum in Nashville, Tennessee.

Dylan, Cash, and the Nashville Cats: A New Music City, featuring a previously unreleased version of Bob Dylan’s “If Not For You” and 35 other essential tracks, will be available Tuesday, June 16.

The Country Music Hall of Fame & Museum exhibition, “Dylan, Cash, and the Nashville Cats: A New Music City Presented by Citi,” opened March 27, 2015 and will run through December 31, 2016. The museum will celebrate the album’s launch later this summer with a concert to be held on 5th Avenue between Demonbreun Street and Korean Veterans Boulevard on July 7, 2015 at 6 pm. The line-up for the concert will be announced soon.

Beginning May 11, fans can follow a special Spotify playlist with ten cuts from the forthcoming album. A new song will be added to the playlist each week leading up to the album’s release on June 16. The featured songs will be accompanied by special commentary from Charlie Daniels, one of the Nashville Cats.

“Bob Dylan surprised many when he came to Nashville and began working with the city’s unmatched session musicians the Nashville Cats,” said Country Music Hall of Fame and Museum historian Michael Gray. “Around this same time, Johnny Cash was recruiting folk and rock musicians—including Dylan—to appear on his groundbreaking network television show. This album and Spotify playlist, with commentary from Nashville Cat Charlie Daniels, explore this magical time in ‘a new Music City.'”

Dylan, Cash, and the Nashville Cats: A New Music City explores the relationship between pop, rock, folk and country music through a variety of essential recordings that define an American era and sensibility that continue to shape and influence contemporary culture across the world.

Bob Dylan’s decision to record his watershed double album Blonde On Blonde in Nashville in 1966 provided a catalyst for many counter-cultural and establishment musicians to come together in a seemingly unlikely destination in the politically polarized sixties. In spite of its reputation as a conservative town, removed from the main trends in popular music, Nashville was home to musicians who had a huge influence on other music scenes of the era.

Bob Dylan, Leonard Cohen, The Byrds, Simon & Garfunkel, Neil Young, Paul McCartney, George Harrison, Linda Ronstadt and The Monkees were among the many pop, rock and folk artists who came to Nashville in the late 1960s and early 1970s to record with Music City’s exquisitely versatile session musicians, known to insiders as the “Nashville Cats.”

Bob Dylan and Johnny Cash were the seminal artists that first tapped into the crossover potential of the Nashville sound. The museum exhibit opens with a brief biographical section on Dylan’s career prior to his 1966 arrival in Nashville and the events that drew him to Music City. When recording Highway 61 Revisited in 1965, Dylan was in New York working with producer Bob Johnston, a former Nashville resident. Johnston asked multi-instrumentalist Charlie McCoy to play guitar on Dylan’s “Desolation Row.” Johnston urged Dylan to record his next album in Nashville and the result, 1966’s Blonde On Blonde is considered one of the great achievements of Dylan’s career and a benchmark of American popular music. Dylan’s subsequent late ’60s and early ’70s albums–John Wesley Harding, Nashville Skyline, and portions of Self Portrait–embodied the sound and soul of Nashville.

Dylan, Cash, and the Nashville Cats: A New Music City goes on to explore Dylan’s musical relationship with country legend Johnny Cash. The two cemented their friendship at the 1964 Newport Folk Festival and were reunited in Nashville in February 1969. Dylan had recorded most of Nashville Skyline when he went into the studio with Cash, where the pair cut more than a dozen duets in two days. One of these, a new interpretation of Dylan’s “Girl from the North Country,” appeared on Nashville Skyline, the Dylan album for which Johnny Cash wrote Grammy-winning liner notes.

Johnny Cash went on to further bridge the culture gap between Nashville’s old guard country music and the new young pop musicians dominating the airwaves through his successful television program, “The Johnny Cash Show.” Shot at Nashville’s Ryman Audition, “The Johnny Cash Show” brought country, pop and rock musicians together in a national broadcast forum that brought new audiences to each of the genres. Dylan and Joni Mitchell were guests on the Johnny’s first show, with Linda Ronstadt, Neil Young, Gordon Lightfoot and Eric Clapton’s Derek & the Dominos appearing on subsequent episodes.

Artists who followed Dylan to Nashville to record or to appear on Cash’s show wound up recording with the world-class musicians known as the Nashville Cats. In many cases, these out-of-town visiting artists created records regarded as career highlights, thanks to the accomplished Nashville players providing support.

In the wake of Bob Dylan and Johnny Cash, Nashville became a new kind of music capitol, drawing an incredible influx of musicians, writers, and artists. The liberating musical climate and the burgeoning countercultural movement provided a supercharged atmosphere for creativity.

Since opening in March, the Country Music Hall of Fame & Museum’s “Dylan, Cash, and the Nashville Cats: A New Music City” exhibit has been generating high praise for its critical acumen and historic significance.

The New York Times (March 29, 2015) observed, “In the late 1960s and early 1970s, dozens of rock and folk acts traveled to Tennessee and, in a series of unlikely alliances, emerged with an astonishing number of big hits and classic recordings. The era is documented in ‘Dylan, Cash and the Nashville Cats: A New Music City,’ an ambitious exhibition that….points to three primary forces behind the migration to the Music Row studios: Bob Dylan’s journey here to record the ‘Blonde on Blonde’ album in 1966; the ABC television series ‘The Johnny Cash Show,’ which filmed at the Ryman Auditorium from 1969 until 1971; and an extraordinary group of session musicians informally known as the ‘Nashville Cats,’ who played in one form or fashion on virtually all of these recordings, including albums by Neil Young, Leonard Cohen, Linda Ronstadt, Simon and Garfunkel, and three of the four Beatles.”

As Time magazine noted, “Nashville has a reputation, and a well-earned one too: the Tennessee city is the home of country music. But, as the Country Music Hall of Fame points out with a new exhibition…that deserved reputation doesn’t mean that Nashville’s musical horizons are limited to one genre alone.”