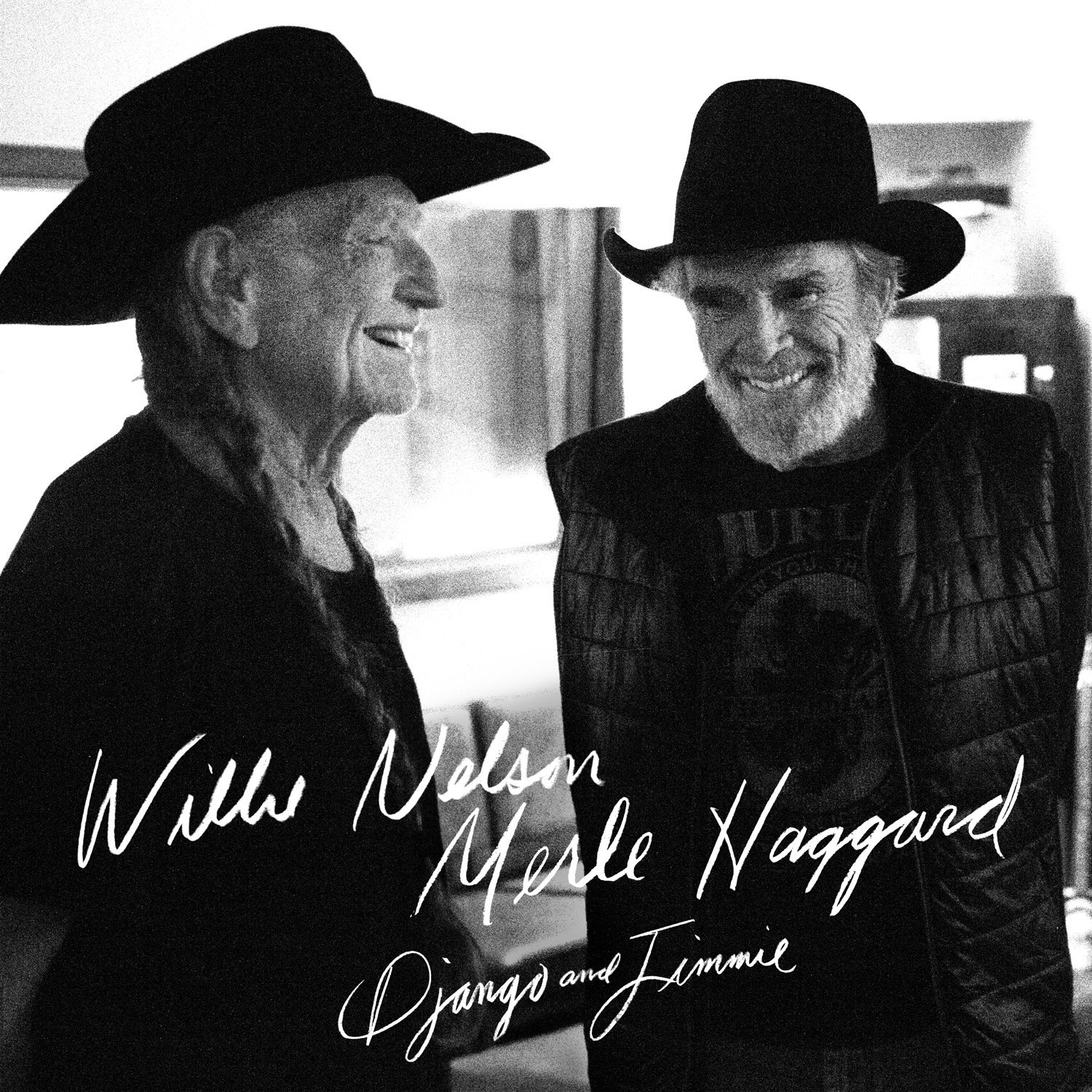 “Me and Merle got a new album coming out called Django and Jimmie and the title track is about Django Reinhardt and Jimmie Rodgers,” said Willie Nelson.  “Both of those guys were very influential in both of our careers.”

According to Merle Haggard, there’s “new songs, a couple of classics and Willie sang like he was a teenager.”

For Django and Jimmie, Willie Nelson’s sixth studio album release for Legacy since inking an historic deal with the label in 2012, the legendary singer-songwriter joined forces with longtime friend and collaborator Merle Haggard to reignite the musical chemistry that made the pair’s Pancho & Lefty a honky-tonk blockbuster and America’s #1 Country Album following its release in January 1983.  Driven by a title track penned by Townes Van Zandt (and arguably the songwriter’s most familiar song), the critically-acclaimed top-selling Pancho & Lefty solidified the reputations of both Willie and Merle as among the most formidable and influential artists in outlaw country music while topping the Billboard Country charts for seven non-consecutive weeks between April and October 1983.

The success of Pancho & Lefty opened the doors for a number of successful follow-up projects including 1987’s Seashores Of Old Mexico album, 2007’s double album Last Of The Breed with Ray Price, and the Merle Haggard-penned “A Horse Called Music” (the lead track on 2012’s Heroes, Willie Nelson’s first album for Legacy).

A legendary country music producer and songwriter in his own right, Buddy helped pen five of the album’s tracks, including “It’s All Going To Pot” (a rollicking anthem for the emerging 21st century cannabis culture) and four cowrites with Willie: “Alice In Hulaland,” “It’s Only Money,” “Where Dreams Come To Die,” and “Driving The Herd.”

Among the 14 essential recordings on Django and Jimmie, Nelson and Haggard each pay musical tribute to the other through heartfelt solo performances: Willie singing Merle’s “Somewhere Between” and Merle covering Willie’s “Family Bible.”

Willie sums up the duo’s new collaboration simply saying, “It’s good music, I got a good feeling about it.”

1. Django and Jimmie – written by Jimmy Melton and Jeff Prince

5. Live This Long – written by Shawn Camp and Marv Green

6. Alice In Hulaland – written by Willie Nelson and Buddy Cannon

9. It’s Only Money – written by Willie Nelson and Buddy Cannon

11. Where Dreams Come To Die – written by Willie Nelson and Buddy Cannon

12. Somewhere Between – written by Merle Haggard

13. Driving The Herd – written by Willie Nelson and Buddy Cannon

14. The Only Man Wilder Than Me – written by Merle Haggard

In February 2012, Willie Nelson entered into an historic new record deal with Legacy Recordings, the catalog division of Sony Music Entertainment, marking a label homecoming for Nelson, who, from 1975-1993, had cut a phenomenal string of top-selling singles and albums for Columbia Records, beginning with 1975’s seminal smash Red Headed Stranger.  New titles by the artist under the Legacy imprint will include newly recorded songs and performances as well as archival releases, personally curated by the artist, drawn from all phases of his career including his recordings for RCA Records and others.

2) Let’s Face The Music And Dance (2013), a collection of new studio performances by Willie Nelson and Family;