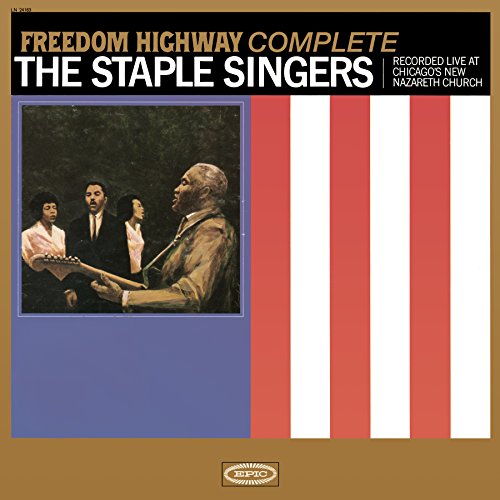 Freedom Highway Complete will be available as a single CD, as a digital release online, and in a special 2LP configuration on Tuesday, March 3, 2015.

Legacy’s Freedom Highway Complete is a state-of-the-art sonic vérité capturing that transcendent Chicago gospel service from 50 years ago. Featuring previously unreleased performances, the spiritually uplifting service, “Pops” Staples’ Intro and Outro and more, Freedom Highway Complete puts the listener right in the church, with the Staple Singers, the choir, the band, and the congregation for a once-in-a-lifetime event.

First released on Epic Records as an LP in 1965, the original Freedom Highway album, constrained by the time limits of 12″ vinyl, edited the New Nazareth Church concert and service down to key performance tracks. Newly expanded to include 30+ additional minutes of the original church service, Freedom Highway Complete edition marks the first-ever release of the full concert and service.

In March 1965, the American Civil Rights Movement galvanized around three historic voter’s rights marches along the 54-mile highway from Selma, Alabama, to Montgomery, the state capital, public acts of protest which served as catalysts to the passage of the 1965 Voting Rights Act. The first march (March 7, 1965) was dubbed “Bloody Sunday” after 600 marchers faced the billy clubs and tear gas of local and state police forces; the second (March 9) reached a standoff between police and protestors, led by Dr. Martin Luther King, Jr.; on the third march (March 21), protestors were protected by 2,000 US Army troops, 1,900 members of the Alabama National Guard and numerous FBI agents and federal marshals. The route taken by the 1965 Civil Rights marchers has been named the “Selma To Montgomery Voting Rights Trail” and is a US National Historic Trail.

Among those inspired by the message and activism of Dr. Martin Luther King, Jr. and the Selma to Montgomery marchers were Chicago preacher/singer/guitarist Roebuck “Pops” Staples and his children, Pervis, Cleotha, Yvonne and Mavis. As The Staple Singers, the family group had been recording folk-infused gospel since the 1950s, and, by 1965, had been signed to Epic Records by Billy Sherrill (the songwriter/producer who would bring George Jones and Tammy Wynette to the label).

On April 9, 1965, The Staple Singers returned to their local parish, New Nazareth Church in Chicago, to participate in a service inspired by the Alabama marches. In a spirit-filled set that runs from Civil Rights anthems (“We Shall Overcome”) to traditional gospel (“When The Saints Go Marching In”), The Staple Singers introduced their own original material, including the just-composed “Freedom Highway,” inspired by the Selma to Montgomery marches.

Throughout the set, “Pops” Staples showcases the six-string guitar skills that transformed, and united the worlds of gospel, R&B, soul, rock and blues music. An archetypal electric guitar master, his influence can be heard in the sounds of Curtis Mayfield, Steve Cropper, John Fogerty, Michael Bloomfield and many others.

In the Staple Singers Essential Discography included in I’ll Take You There: Mavis Staples, The Staple Singers and the March Up Freedom’s Highway, author Greg Kot singles out the original 1965 release of Freedom Highway,writing, “The Staples mix gospel fervor with fierce protest music on their home turf, a concert at New Nazareth Church on Chicago’s South Side. One of the best live albums ever made (though sadly out of print).”

On page 106 of his book, Kot writes, “In the New Nazareth Church concert, Pops connects the themes of gospel music and the civil rights movement more explicitly than ever before. It presents him not just as a musical innovator, but as a philosopher, preacher, and visionary, a melding of black church music and black popular music for a common cause. Church music was no longer just about making it through this world to get to the next one; it was also about living right now in the streets all African Americans shared.”

Five decades after Selma-Montgomery Freedom Marches and this jubilant celebratory concert, Freedom Highway Complete takes on a new social and cultural relevance and urgency in light of current events. Produced by Nedra Olds-Neal and Steve Berkowitz, this newly expanded edition features additional material cut from the original release, all newly mixed by Steve Addabbo and mastered by Mark Wilder. The new Freedom Highway Complete is a crucial document of this remarkable and important time in American history.

About The Staple Singers

The Staple Singers story begins in Winona, Mississippi, with the birth of Roebuck “Pops” Staples on December 28, 1914. A contemporary and protégé of mythic rural blues guitarist Charley Patton, “Pops” Staples developed his own repertoire of six string skills, playing at local dances, picnics and church services. In 1931, he became a member of the Golden Trumpets, singing and playing guitar with the Mississippi gospel jubilee quartet. Part of the great migration of black Americans who moved north for better paying factory jobs, Pops relocated to Chicago in 1936, playing gospel music with the Windy City’s Trumpet Jubilees. In the mid 1950s, he presented his daughters, Cleotha and Mavis, and his son, Pervis, to a church audience. From that time on, The Staple Singers have been a powerful force in American gospel, soul and popular music.

Inducted into the Rock and Roll Hall of Fame in 1999, The Staple Singers won the 1992 Rhythm and Blues Foundation’s Pioneer Award and took home a Grammy Lifetime Achievement Award in 2005.