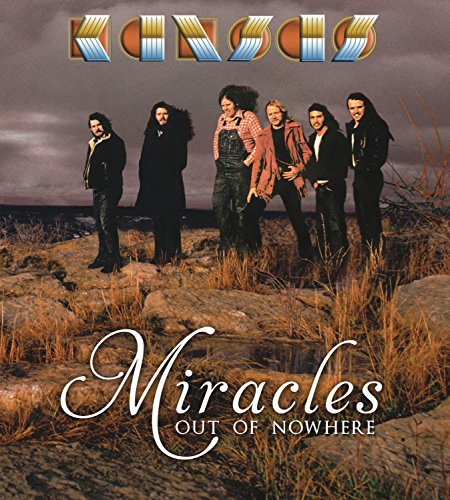 Miracles Out of Nowhere

A New Full Length Documentary Revealing the Untold Story of the

November 18th, 2014 – Epic Records and Legacy Recordings, the catalog division of Sony Music Entertainment, will release KANSAS – Miracles Out of Nowhere, a DVD/CD package celebrating one of the most popular American bands of the 1970s. The package includes a new, full-length, documentary film and a companion audio disc of greatest hits, deep album cuts, and more, in March 2015.

Epic/Legacy will also release a deluxe limited edition CD/DVD set, available exclusively through KANSAS. This edition includes an additional DVD of bonus features and outtakes not included in the documentary and not available in stores, along with the 78-minute documentary DVD and specially crafted companion CD. The unique CD, curated by longtime KANSAS producer Jeff Glixman and KANSAS drummer Phil Ehart, features hits and deep cuts alongside audio extracts from the film.

KANSAS – Miracles Out of Nowhere deluxe limited edition CD/DVD set is available now for pre-order. Please visit http://smarturl.it/kansas_MOON_d2c for more information. The standard version will be available for pre-order on Amazon on December 26th.

View the KANSAS – Miracles Out of Nowhere trailer here: http://smarturl.it/kansas_vid

Directed by Emmy-nominated Charley Randazzo, the documentary features interviews from legendary Queen guitarist and former tourmate Brian May, acclaimed producer Brendan O’Brien, Rolling Stone journalist David Wild, and more. Featured prominently is country icon Garth Brooks, who counts KANSAS, alongside The Beatles and the Eagles, as one of his greatest inspirations. These extraordinary new insights are coupled with rare and unseen footage, including live performances and candid, fan-shot footage of the band on the road. Miracles Out of Nowhere offers an unprecedented look at the incredible ascent of KANSAS, a story that will appeal to new fans and veteran enthusiasts alike.