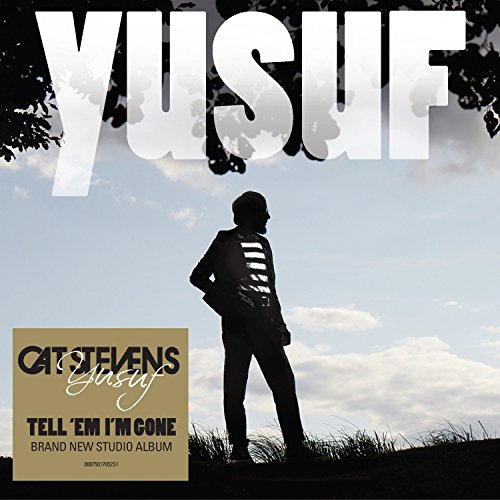 TO BE RELEASED OCT. 27 ON LEGACY RECORDINGS

The worldwide premiere of “Dying To Live,” the first single from Tell ‘Em I’m Gone is available now at RollingStone.com here: http://smarturl.it/dyingtolive

This new relationship with Legacy Recordings will include brand new recording projects, existing catalog titles, previously unreleased live material, and a treasure trove of audio and video from Yusuf/Cat Steven’s personal archives. The new album, Tell ‘Em I’m Gone is the first piece of a larger relationship that will continue over the coming years.

Yusuf/ Cat Stevens also announced that he will embark on his first North American tour in over 35 years, giving fans in select cities the opportunity to hear his remarkable catalog and superb new songs live, many for the first time. The Peace Train…Late Again tour will kick off December 1 at Massey Hall in Toronto and conclude on December 14 at Nokia Theatre LA LIVE in Los Angeles, CA. The Peace Train…Late Again North American tour dates include:

Tickets for the general public begin going on sale on Saturday, September 27th at 10:00am local time (please check your market for select timings). Fans who pre-order Tell ‘Em I’m Gone on Amazon.com (starting now until Sunday, September 21 at 11:59pm PST) will receive early access to purchase tickets to the US tour dates. Please see specific details below.

The North American tour comes on the heels of the European leg of the Peace Train…Late Again tour.

On Tell ‘Em I’m Gone, Yusuf returns to the roots of his teenage musical inspiration: American blues and R&B, using these genres to explore humanity’s climb to freedom with songs that recall the spirit of his earliest days as a nascent singer-songwriter in London. Each track on the album revives the age-old themes of freedom and peace that have marked more than four decades of Yusuf’s musical career. Stunning originals like “I Was Raised In Babylon” and “Cat And The Dog Trap” plus covers of blues-pop and American song standards (“Big Boss Man,” “You Are My Sunshine”) and a moving version of Edgar Winter’s “Dying To Live,” find Yusuf as strong of voice and as engaging a performer as ever.

“Although I was to venture through many lyrical terrains, melodious valleys and cadences during my fifty-year musical and spiritual exploration, and though many would agree that I have covered a lot of ground, there was always one path I meant to take. Hidden in the background behind my renowned troubadour persona lurked an R&B alter-self waiting to be let free,” Yusuf says of the new album. “What’s powerful and profound, to me, is the overall message which emerged, lyrically. It suddenly stared me in the face: the innate struggle for Freedom! Isn’t that what most human beings dream of? Music and the Blues particularly was a means of escape for many chained to the destiny of the rich and powerful.”

“Yusuf continues to make music that resonates in its beauty and universally empowering themes,” says Adam Block, President, Sony Music’s Legacy Recordings. “It’s both humbling and thrilling to be given the opportunity to have him become a member of the Legacy family. We look forward to working together to create new platforms for Yusuf’s future recordings while celebrating his remarkable career with stories we’ll tell from the artist’s personal archive.”

Having first found fame as a teenage heartthrob singer in 1960s England, Cat Stevens gained worldwide acclaim for his intimate and affecting works in the 1970s. His compositions “Wild World,” “Peace Train,” “Father and Son” and “Morning Has Broken” remain staples of the folk genre. Following a conversion to the Islamic faith in 1977, Stevens retired from the music business to work with and support causes in education and humanitarian relief. In 2006 Yusuf returned to pop music with the album An Other Cup. Yusuf was also inducted into the Rock and Roll Hall of Fame in March 2014.

MORE INFORMATION ON THE AMAZON.COM PRE-ORDER OFFER
While supplies last, eligible fans who pre-order Yusuf / Cat Stevens’ new album Tell ‘Em I’m Gone on MP3 or CD on or before 11:59 PM Pacific time on September 21, 2014 from Amazon.com will receive a unique pre-sale code good for early access to purchase up to two (2) tickets for eligible concerts in his upcoming U.S. tour. Early access using the pre-sale codes is available between Wednesday, September 24, 2014 at 12:00 PM local concert venue time and Thursday, September 25, 2014 at 10:00 PM local concert venue time. Please note concert tickets and pre-sale codes are subject to availability and the presale code does not guarantee tickets to the concert or price level of your choice. Your pre-sale code will be emailed within 24 hours of your pre-order. Limit 1 code per Amazon customer. For more information please visit: http://www.yusufcatstevens.com/amazonoffer