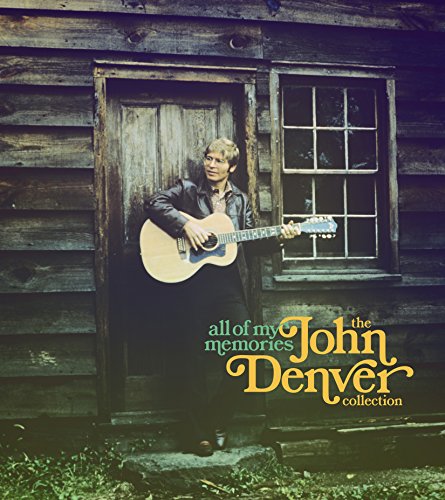 September 11, 2014-New York, NY- John Denver’s prolific recording career is paid high tribute on ALL OF MY MEMORIES: THE JOHN DENVER COLLECTION.  This deluxe 90-song, 4-CD box set, representing virtually every one of the studio and live albums he recorded in his lifetime, encom­passes hit singles and signature album tracks, demos, promotional rarities, limited edition and private pressings, and a total of six previously unreleased tracks.  The first truly comprehensive over­view of his more than three decades of recording, from 1964 (before his solo career took off) to 1997 (the year of his death), this box set will be available every­where November 4th through RCA/Legacy Recordings, a division of Sony Music Entertainment.  ALL OF MY MEMORIES is available now for pre-order on Amazon.

From his start as an itinerant folk-singer in the mid-1960s, John Denver rose to world class status as a multi-platinum selling recording artist and producer, a two-time Grammy Award®-winner (and five-time host of the Grammy Awards® broadcast), movie actor, television personality, philanthropist, environmental and human rights activist, and much more.

John Denver is recognized as one of the most celebrated entertainers of the 1970s, with sales over 33 million to date, including eight Billboard Top 10 RCA Albums in the U.S. (three of which hit #1).  These include seven RIAA multi-platinum, thirteen platinum and 20 gold album certifications.  He charted more than 40 Billboard Hot 100, AC and Country songs from 1971 to 1988.  His #1 hits from 1974-’76 included “Sunshine On My Shoulders,” “Annie’s Song,” “Back Home Again,” “Sweet Surrender,” “Thank God I’m A Country Boy” (a rare live record to top the chart), “Calypso” (a monument to his close association with undersea explorer Jacques Cousteau), “Fly Away” featuring Olivia Newton-John, “Look­ing For Space,” and “Like A Sad Song.”  These and his ‘campfire’ standards, “Leaving On A Jet Plane,” “Take Me Home, Country Roads” (designated in 2014 as the state song of West Virginia), and “Rocky Mountain High” (designated in 2007 as one of two state songs of Colorado) – not to mention his numerous recordings, movies and television appearances with Jim Henson’s Muppets – comprise a body of work that will resonate forever.

An accomplished songwriter, John Denver received the Carl Sandburg People’s Poet Award in 1982, and was inducted into the Songwriters Hall Of Fame in 1996.  As a writer’s writer, he appreciated a great song, as ALL OF MY MEMORIES shows.  The box set features compositions by Bill Danoff & Taffy Nivert (who co-wrote “Take Me Home, Country Roads,” “I Guess He’d Rather Be In Colorado” and others), Buddy Holly (“Everyday”), John Prine (“Blow Up Your TV (Spanish Pipe Dream)”), Joe Henry, and others of note.

John Denver would have turned 70 on December 31, 2013. In November 2013, the BBC Four documentary, John Denver: Country Boy, premiered in recognition of his 70th.  The one-hour film featured interviews with many important figures who knew Denver best, including his widow Annie Denver, producer Milton Okun, manager Jerry Weintraub, musicians James Burton and Paul Prestopino, and many others.  The 32-page booklet for ALL OF MY MEMORIES will include the definitive 2,600-word liner notes essay written by long-time John Denver chronicler G. Brown, former Denver Post music critic, and now Director at the Colorado Music Hall of Fame.  Its first inductee was John Denver, in 2011.

Industry legend Milton Okun ‘discovered’ Denver and was his long-time producer (and execu­tive producer) on some 20-plus studio, live and ‘hits’ albums from 1965 (as the Mitchell Trio’s producer) up until 1986.  As Okun said in the BBC documentary, “He came to New York to audition, and it was very clear right away that he was the best.”  Okun brought Denver’s “Leaving, On A Jet Plane” to Peter, Paul & Mary (whom he was also producing) for their second ‘folk-rock’ LP, Album 1700, and the song became PP&M’s one and only #1 career hit.  “He represented America at its best and healthiest,” Okun said of Denver, “and was a wonderful artist and a wonderful writer, and I think his songs will be sung for hundreds of years. They’re that good.”

The release of ALL OF MY MEMORIES: THE JOHN DENVER COLLECTION builds on the momentum of a resurgence in his popularity that began in 2007, the tenth anniversary year of his death, when the Colorado Senate named “Rocky Mountain High” as one of its two official state songs.  Several commemorative multi-CD and DVD concert packages were issued by his family over the next two years.  In April 2011, the all-star John Denver Earth Day Celebration Concert sold out at 1STBANK Center; and February 2013 marked the opening of the 15-city “John Denver: A Rocky Mountain High Concert” tour, in which for the first time in 15 years, he was seen on giant video screens, performing hit songs spanning his career, backed by live musicians.  The music was presented along with stories of life on the road with the artist, as told by old friends and fellow performers.

Interest soared when The Music Is You: A Tribute to John Denver (ATO Records) debuted in the Top 50 on Soundscan in April 2013.  A diverse group of contributing artists ranged from Dave Matthews to Train, to Lucinda Williams, Amos Lee, Old Crow Medicine Show, and many more.  Highlights included My Morning Jacket’s opening take of “Leaving On A Jet Plane,” and a special duet by Brandi Carlile and Emmylou Harris on “Take Me Home, Country Roads.”

Indeed, John Denver’s passions extended far beyond the music.  Throughout his career, he imparted strong messages in his work and used his celebrity to champion important causes. Songs like “I Want to Live” and “Let Us Begin (What Are We Making Weapons For)” served as rallying themes to stand up and solve problems like world hunger and nuclear disarmament. He backed up his convictions with action, co-founding both the Hunger Project charity and the Windstar Foundation to raise awareness for those suffering from starvation and to educate people on conservation efforts, two causes closest to his heart.

In his liner notes for ALL OF MY MEMORIES, G. Brown evokes the memory of fellow singer-songwriter (and folk boom survivor) John Stewart, who told a British journalist in 1971 about his friend: “Watch John Denver.  He’s a genius.  He’ll defeat all the cynicism in the world because he’s so real.  You don’t have to think too much about him—just lie back and let his sunshine wash all over you.  And you know you’ll feel real.”

ALL OF MY MEMORIES: THE JOHN DENVER COLLECTION