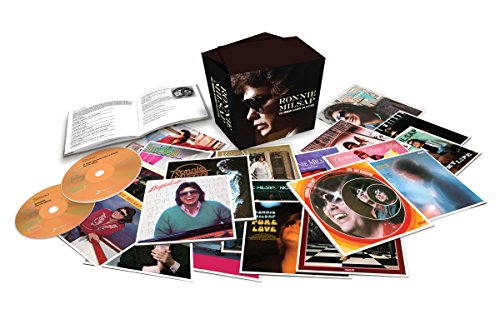 September 4, 2014 – New York, NY –  When Ronnie Milsap was elected one of the 2014’s three Country Music Hall of Fame inductees, it validated a body of work that has been one of the most enduring, genre-blurring and comprehensive in modern country music. Having won six Grammys and four prestigious Country Music Association Album of the Year Awards, as well as notching 48 Top 10 hits – of which 40 were #1’s – he set a standard for breaking ground and retaining one’s roots.

To commemorate that achievement, Legacy Recordings, the catalog division of Sony Music Entertainment will release The RCA Albums Collection on Nov. 4. The comprehensive, 21-CD package features all of Milsap’s original albums for RCA; many appearing on CD for the first time, others long unavailable. Most importantly, this attractively packaged box set allows music lovers to take in the breadth of influences and impact Milsap had on the genre in the 70s and 80s.

“A lot of today’s country singers make records with an R&B influence, but they have nothing on Ronnie Milsap,” USA Today wrote when his brand new Summer #17 was released earlier this year. CMA Close-Up agreed, “Milsap had no fear of mixing the genre’s past and building his sound on what he retrieves” and The Tennessean observed “Milsap has long thrived by ignoring genre distinctions…”

Blind since childhood, Milsap used music to navigate the world. Beyond his Top 5 R&B hit “Never Had It So Good,” written by Ashford & Simpson and issued on Scepter Records, Milsap played the Apollo and Howard Theaters, moved through Memphis where he did session work for Elvis and Los Angeles, where a stint trying working with JJ Cale at the Whiskey A Go-Go led him to Nashville.

“I wanted to make music,” Milsap said. “And I knew music expands and embraces all kinds of things. Soul and country aren’t that different at the root, and my career in Nashville was a lot about that common ground.”

From 1974 through 1991, Milsap placed 48 consecutive hits on Billboard’s Country’s Top 10. Beyond the Grammy-winning “Please Don’t Tell Me How The Story Ends,” “(I’m A) Stand By My Woman Man,” “(There’s) No Getting’ Over Me” and “Lost in the Fifties Tonight,” Milsap’s classics include “It Was Almost Like A Song,” “Stranger In My House,” “What A Difference You’ve Made In My Life,” “Smoky Mountain Rain” and “Prisoner of the Highway.”

It is shaping up to a major fall for Milsap. Slated to receive the Academy of Country Music’s Career Achievement Award on Sept. 9 at Nashville’s Ryman Auditorium, he will also be inducted into the Country Music Hall of Fame on October 26 in the Hall’s intimate Ford Theater. But the crowning achievement will be the release of The RCA Albums Collection Nov. 4, with CD size reproductions of the covers, liners from Peter Cooper, expanded notes about each recording and remastered versions of every album Milsap made during his four decade spanning tenure on the label.

“The idea that all the music I made for RCA will be available in one place thrills me,” Milsap offered. “It is my life’s work. These songs, and the record I made are a big piece of who I am – and the people who loved them. I feel honored to know The RCA Collection is coming.”

Out Where The Bright Lights Are Glowing (1981)