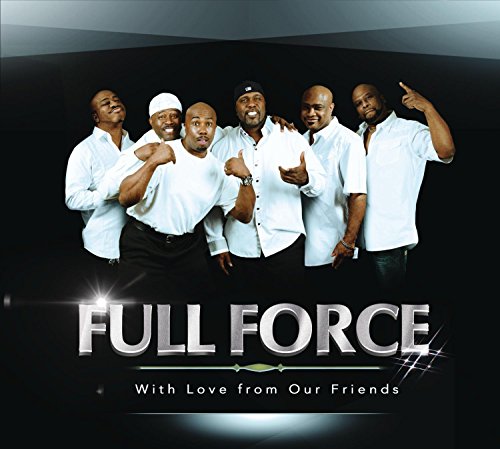 LEGENDARY R&B/HIP-HOP GROUP FULL FORCE IS SET TO RELEASE NEW ALBUM ‘FULL FORCE: WITH LOVE FROM OUR FRIENDS’ ON AUGUST 26, 2014

June 25, 2014 – New York, NY – Full Force, – that is, Paul Anthony, Bowlegged Lou, B-Fine, Curt-T-T, J-R aka Shy Shy, and Baby Gerry aka DJ Geenius – one of music’s pioneering R&B/hip hop vocal band/production teams, is proud to announce the release of Full Force: With Love From Our Friends. This brand new studio album featuring an impressive line-up of special guests will be available on August 26, 2014, through Legacy Recordings, a division of Sony Music Entertainment.

“I am honored to be a part of this project which is for a great cause but it is also me getting a chance to work with one of my musical heroes,” stated Grammy Award winning producer, Raphael Saadiq.

Diagnosed in 2006 with Mantle Cell Lymphoma, Full Force: With Love From Our Friends is also a dedication to band member Paul Anthony’s challenges and triumphs to combat the disease. Now in remission, thanks to a bone marrow transplant courtesy of his brother Lou, Anthony uses his platform as an entertainer to bring awareness of this health issue to fans who attend Full Force’s shows, and at speaking engagements across the country.

“This project is my musical re-birth,” expressed Paul. “Everyone took the time to bless this project and transfer the love and energy from all parts of the world. So much wonderful alignment for the assignment — and to think, the best is yet to come!”

Full Force: With Love From Our Friends not only unifies a variety of artists but also reflects the group’s broad range of sounds and styles. The first early album appetizer from the album is the electrifying ballad, “All Cried Out (Feat. Tisha Campbell-Martin),” which premiered earlier this year at Urban AC radio outlets nationwide. The album also includes a sizzling female empowerment song entitled, “Thank You For Leaving Me (Feat. Meli’sa Morgan and Cheryl Pepsii Riley),” which features a sassy spoken intro by Vivica A Fox. The track entitled “I Feel Good, I Look Good, I’m God Good (Feat. Faith Evans, Sheila E and The God Good Choir & Children),” is the soaring anthem that has already impacted Gospel and Inspirational radio across the country.

“The song is positive and spiritual for a great Cancer Champion cause. I’m proud to have contributed to this project,” expressed Sheila E. “I too am pleased with how the song came out with Full Force and the incomparable Sheila E. It was my honor to participate in this album dedicated to Paul,” added Faith Evans.

Full Force will be touring in various cities to promote their new album and Paul Anthony’s Cancer Champion Initiative.

Full Force is one of music’s legendary award-winning R&B/hip hop vocal band/production team, with a proven track record, that stands among the most talented and successful musician collectives in modern pop, r&b, hip-hop and dance. Writers, producers, and performers all, the pioneering group is behind a seemingly endless string of genre-busting, groundbreaking classics, spanning UTFO’s seminal “Roxanne Roxanne” and the blockbuster Lisa Lisa & Cult Jam with Full Force, collaborations with icons like James Brown, Selena, and Bob Dylan, and writing and/or producing major tracks by such superstars as Rihanna, Backstreet Boys, Justin Timberlake & Nsync, Jill Scott, The Black Eyed Peas, and countless others. Through it all, Full Force has remained a sensation all their own, offering up such top-charting R&B favorites as “Aint My Type of Hype, Alice I Want You Just For Me “Unselfish Lover,” and “Temporary Love Thing,” as well as starring roles as the big bad comedic bullies in the blockbuster film comedies House Party and House Party 2.

About The Paul Anthony Foundation

Beyond music, living a healthy lifestyle and having a strong spiritual being, Anthony is committed to raising awareness about cancer prevention, research, and “championing” the fight for a cure. He shares his own personal experience in diffusing, harnessing and eventually eradicating the challenge of his disease through his organization, The Paul Anthony Foundation. TPAF is a charitable program proudly aligned and fiscally sponsored by United Charitable Programs (UCP) a 501(c)(3), 509(a)(1) Charity Organization; dedicated towards educating, empowering and increasing not just the cancer survivor, but “The Cancer Champion”. (For more info please visit www.Palivelife.org).