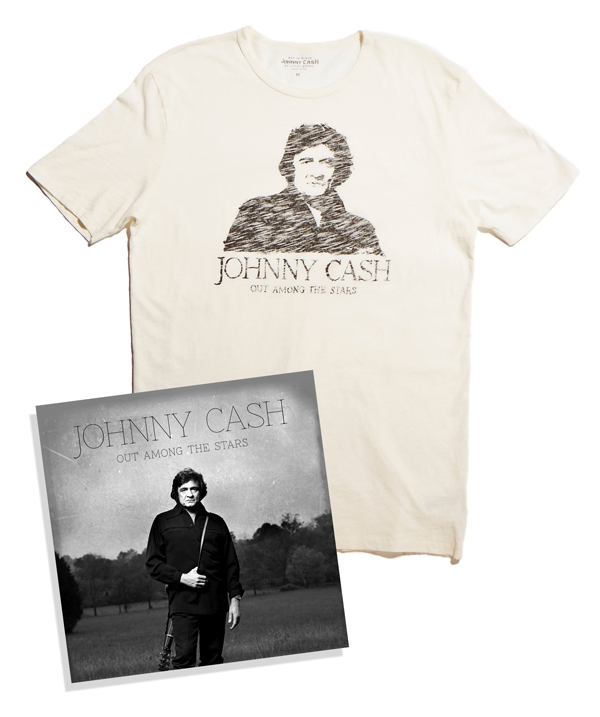 Los Angeles, CA (March 24, 2014) – Lucky Brand announced today that they are expanding their ongoing partnership with original American icon, Johnny Cash—the “Man in Black”— in honor of the March 25 release of a lost Johnny Cash album, Out Among The Stars (Columbia/Legacy).

The expanded collection features new graphic t-shirts, a men’s fleece jacket and a women’s tank top. In addition, Lucky Brand will debut an exclusive, limited edition “Out Among The Stars” t-shirt, emblazoned with artwork from the newly discovered studio album, thirty years in the making. Graphic tees will be priced at $39.50 and the men’s fleece crew will retail for $69.50 when the collection hits Lucky stores and LuckyBrand.com March 25, 2014.

“Lucky Brand has always embraced the spirit of American music,” says Lou Robin with the Johnny Cash Trust.“  We’re thrilled to collaborate with Lucky to support Johnny’s music and to create a contemporary collection that not only appeals to lifelong fans, but also introduces a whole new generation to Johnny Cash.”

The Lucky Brand collection will be available March 25, 2014. Out Among The Stars, a remarkable new album comprised of 13 recently discovered Johnny Cash studio tracks may be pre-ordered now at: http://smarturl.it/cash_stars_amzn .

About Lucky Brand
Lucky Brand began crafting great-fitting, vintage-inspired jeans in Los Angeles in 1990, quickly earning the title of “America’s favorite.” The brand also produces apparel, shoes, accessories and jewelry for men and women that are sold in more than 200 retail stores within the U.S., high-end department and specialty stores, select stores in Canada, and online at LuckyBrand.com.