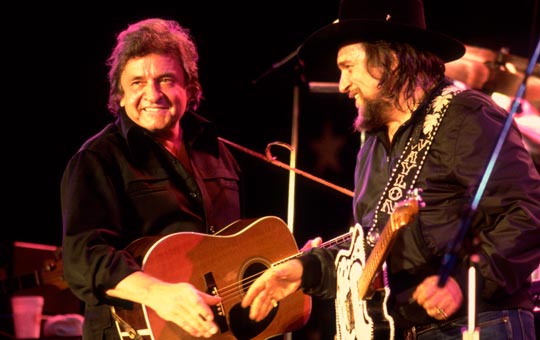 At the beginning of the 1980s, Johnny Cash teamed with producer Billy Sherrill to work on a new album for Columbia Records. However, the label ultimately shelved several of the recordings, including Cash and Waylon Jennings’ energetic rendition of Hank Snow‘s “I’m Movin’ On.”

For about three decades, these Cash recordings were left neglected in an archive. Then in 2012, John Carter Cash found the material while he was sorting through his late father’s belongings. Working with Sony Music Entertainment, he recruited musicians like Marty Stuart (who played on the original sessions), Buddy Miller and Carlene Carter to polish the tracks for release.

As a result, 12 previously unreleased songs will be issued as Out Among the Stars on March 25 through Legacy Recordings. The collection features two duets with June Carter Cash — “Baby Ride Easy” and “Don’t You Think It’s Come Our Time.” Cash’s compositions “Call Your Mother” and “I Came to Believe” are represented as well.

Visit CMT.com to be the first to hear Johnny Cash and Waylon Jennings’ “I’m Movin’ On.”