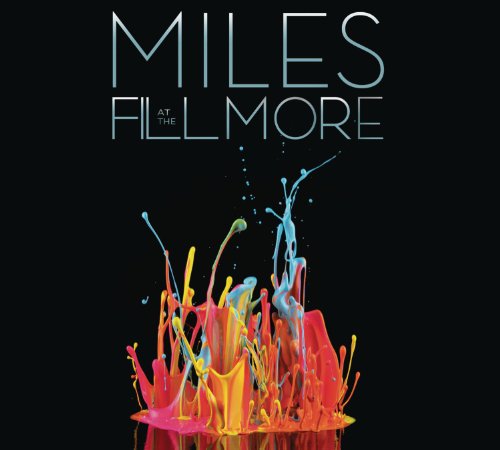 At one of the most crucial moments in jazz and rock history, two months after the release of Miles’ groundbreaking double-LP Bitches Brew in April 1970, he was beginning to discover – and be discovered by – the burgeoning rock audience that came of age in the late 1960s. Miles, inducted into the Rock And Roll Hall Of Fame in 2006, the only jazz artist and only solely instrumental artist ever inducted, had started listening to the funk of James Brown, Sly & the Family Stone, the Chambers Brothers, and Jimi Hendrix, not to mention the Beatles. Bitches Brew was a turning point for jazz and rock. Bill Graham had a long history of presenting jazz artists at the Fillmores (Charles Lloyd, John Handy, and Roland Kirk among them) but it was Miles who carried rock audiences to a new plateau.

In October 1970, Columbia Records released the 2-LP set Miles Davis At Fillmore, which consisted of performances culled from the four nights of shows at the Fillmore East (where Miles opened for fellow Columbia artist Laura Nyro). At that time the shows were edited to fit the LP format. The full unedited shows are now presented for the first time yielding 100-plus minutes of previously unreleased music.

The three additional bonus tracks add another 35 minutes of music, released here for the first time, recorded in April 1970, at the Fillmore West in San Francisco (where Graham put Miles and band on a bill with the Grateful Dead and Stone The Crows). MILES AT THE FILLMORE – Miles Davis 1970: The Bootleg Series Vol. 3 now contains 135 minutes of previously unreleased music.

The 32-page booklet that accompanies the box set provides a context for Miles’ musical transformations in the turbulence of the Fillmore rock epoch, as the psychedelic era of the late-1960s segued into the politically-charged intersection of the anti-war movement, Black Power, and the rise of funk. The illuminating 2,500-word chronologic essay was written by reissue producer Michael Cuscuna, who was a first-hand witness (as a disc jockey on New York’s influential WPLJ-FM) to Miles’ development at the time. The essay underscores the discovery of Miles by progressive underground FM radio and the late-’60s rock generation, at this crucial turn of his career.

In addition, an introductory Producers’ Note has been written by reissue producers Cuscuna and Richard Seidel. They provide a concise overview of Miles’ Fillmore period and the project itself, its correlation with the original Columbia double-LP, especially the additional 100 minutes of unreleased music from the shows, and 35 minutes of unreleased music on the bonus tracks.

With the release of his groundbreaking double-LP Bitches Brew on Columbia just two months earlier in April 1970, Miles was front-page news around the world. He was leading a quintet lineup that included Chick Corea on electric piano, bassist Dave Holland, and drummer Jack DeJohnette (all of whom had been at the core of the Bitches Brew sessions recorded in August 1969), plus two members who had played on studio sessions since November, 1969 and then joined the touring band in February and April of 1970 respectively – tenor and soprano saxophonist Steve Grossman, and percussionist, flutist and vocalist Airto Moreira.

At the Fillmore East, they were joined by none other than Keith Jarrett on organ and tambourine, during the historic three month period when both Jarrett and Corea manned the keyboards for Miles. Jarrett had just played on some key Miles studio sessions in the weeks before the Fillmore East shows, and would continue to be a member of the band until late 1971, also performing on Miles’ remaining two Fillmore stints – at Fillmore West in October 1970, and May 1971.

The four-CD box set devotes one disc to each of the four nights that Miles and his group performed at the Fillmore East. As issued on the original Columbia double-LP in 1970 (Miles Davis At Fillmore, currently available on double-CD as C2K 65139) the music, whose original set lengths ranged from 46 minutes to nearly one hour, was edited by producer Teo Macero to accommodate a seamless sampling of music from each night on each of the four LP sides. Furthermore, no song titles were listed, and the LP sides were simply labeled “Wednes¬day Miles,” “Thursday Miles,” “Friday Miles,” and “Saturday Miles.” To paraphrase a review of the double-LP in Variety at the time, “the only label that can be placed on this program is that it’s Miles Davis music.”

In a rare, in-depth 1970 interview for rock magazine Zygote, it was reported that Miles, while listening to the concert playback, was “so excited about the music that he wanted every set, every note made available to the public…” Back in April, Rolling Stone critic Vince Aletti praised Miles’ [March] debut at the Fillmore East: “He came out looking and sounding tight and steely-hard, knees bent and horn raised, like a heavy spring under tension.”

For 2014’s MILES AT THE FILLMORE – Miles Davis 1970: The Bootleg Series Vol. 3, the producers returned to the original remote live recording tapes, produced by Macero and engineered by Stan Tonkel. On each of the four nights, Miles and his group shook the rafters with high-volume performances of four staples (and the half-minute closer, “The Theme”):

As Miles and the Fillmore East audiences warmed up to each other, and the sets grew to nearly an hour in length, additional tunes were heard. On the second night, Miles played an encore (an extremely rare occurrence), “Spanish Key” from Bitches Brew. On both the third and fourth nights, Miles followed up “It’s About That Time” with the same two songs: the World War II evergreen “I Fall In Love Too Easily” (associated with Frank Sinatra, recorded by Miles on 1963’s Seven Steps To Heaven) and the Wayne Shorter composition “Sanctuary” (from Bitches Brew). On the fourth night, Miles added “Willie Nelson,” which he had recorded in February at the start of the Jack Johnson sessions.

For the bonus tracks, the producers judiciously chose three songs from the April 1970 Fillmore West shows that were in the band’s repertoire, but were not performed at the Fillmore East in June. On disc one, “Wayne Shorter’s ‘Paraphernalia’ and ‘Footprints’,” the producers note, “are from the earlier acoustic repertoire and Miles was to soon stop per¬forming them.” (In fact, “Paraphernalia” dates from 1968’s Miles In the Sky, and “Footprints” dates from 1966’s Miles Smiles.) On disc three, a 13-minute live version of the Jimi Hendrix-influenced “Miles Runs The Voodoo Down” rivals the 14-minute original on Bitches Brew.

All selections are previously unissued.