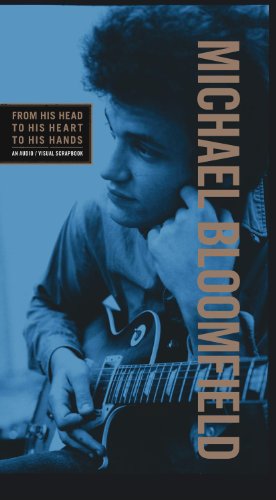 Legacy Recordings Celebrates the Musical Achievements of Electric Guitarist Michael Bloomfield with release of From His Head To His Heart To His Hands on February 4, 2014

“The first time I saw Michael play guitar…it literally changed my life enough for me to say, ‘this is what I want to do for the rest of my life.’” — Carlos Santana

“The future of rock guitar was in ‘East-West.’ At one point or another you’re hearing what would become the Grateful Dead, Santana, the Allman Brothers, Crazy Horse, Television and the Tedeschi Trucks Band.” — Dave Alvin

Legacy Recordings, the catalog division of Sony Music Entertainment, announces the upcoming release of From His Head To His Heart To His Hands (http://smarturl.it/mbloomfield_amzn), a career-spanning 3CD/1DVD box set anthology chronicling the music of Michael Bloomfield, on February 4, 2014.

Produced and curated by Al Kooper (who played with Mike Bloomfield on Bob Dylan’s Highway 61 Revisited sessions in 1965 and the Super Session album in 1968), From His Head to His Heart to His Hands premieres a wealth of previously unreleased tracks–including Bloomfield’s first demos for John Hammond Sr.in 1964 and his final public performance, climaxing with a track from the 1980 Bob Dylan concert in San Francisco–alongside essential key recordings, both live and studio, from his all-too-brief life and career. The anthology collates solo material, work with ensembles including the Paul Butterfield Blues Band and the Electric Flag, tracks with Muddy Waters and Janis Joplin, “Highway 61” band outtakes and more.

From His Head to His Heart to His Hands premieres “Sweet Blues: A Film about Michael Bloomfield.” Directed by Bob Sarles, the documentary combines vintage audio interviews and live performance footage of Bloomfield with newly lensed reflections on the artist from the guitarist’s friends and fellow musicians.

A thoughtful and revealing retrospective, From His Head to His Heart to His Hands provides a fresh appreciation for the enduring musical achievements and ongoing influence of Michael Bloomfield, a musician’s musician, both sideman and superstar. The box includes a 40-page booklet featuring a gallery of striking photos covering the various phases of Mike’s extraordinary career and extensive liner notes by musician, MOJO contributor, and lifelong Bloomfield fan Michael Simmons.

Born in Chicago in 1943, Mike Bloomfield learned blues guitar as a teenager hanging out in the clubs of the South Side, where he “played with every living musician who played electric blues” in real time with masters like B.B. King, Albert King, Freddie King, Buddy Guy, Muddy Waters, Howlin’ Wolf, Big Joe Williams and many more) from 1959 into the early 1960s.

A blues artist, Bloomfield was also a musical prodigy who assimilated jazz and world musics into his fluid improvisational music. As a final cog in the wheel of the original Paul Butterfield Blues Band, one of rock’s first interracial bands and one of the blue’s first experimental ensembles, Bloomfield helped open new vistas of cultural and musical possibilities in 1965-66.

Bloomfield founded The Electric Flag, an experimental soul band fronted by horns and humming with high energy, in 1968. That same year, he sat in for the Grape Jam disc in Moby Grape’s sophomore double album and collaborated with Al Kooper on the platinum-selling Super Session LP.

From 1968-69, Bloomfield would continue to release innovative, guitar-heavy works, including his debut solo album It’s Not Killing Me and My Labors with Electric Flag member Nick Gravenites. His career was later highlighted by session work including Muddy Waters’ Fathers And Sons and Janis Joplin’s solo debut I Got Dem Ol’ Kozmic Blues Again Mama! As well as recorded sit-ins with Woody Herman and Tracy Nelson.

9. Born in Chicago 3:05 – performed by The Paul Butterfield Blues Band

10. Blues with a Feeling 4:23 – performed by The Paul Butterfield Blues Band