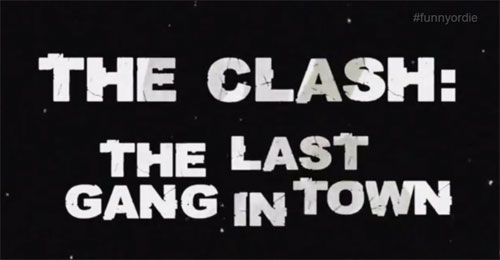 Fred Armisen pays the ultimate homage to “The Clash” in “The Clash: The Last Gang in Town” a new video released today on Funny Or Die. In the video Fred’s infamous Ian Rubbish interviews Mick Jones and Paul Simonon at the historic Electric Lady Studios, reminiscing about the punk rock revolution, pointing out all the similarities between The Clash and Ian Rubbish & The Bizzaros. The interview concludes with the ultimate pairing; Ian performing his hit song “Hey Policeman” with Mick and Paul.

WATCH: The Clash: The Last Gang in Town via FunnyOrDie.com

The video was a dream come true for Armisen, who saw The Clash perform at The Pier in NYC on September 2, 1982 and as an audience member at a taping of “Saturday Night Live” on October 9, 1982.

For Mick and Paul, the video marks the first time they got to play with Ian Rubbish. The latest offerings from The Clash include Sound System (Sony Music Entertainment), a unique collection of the recorded works by the 20th century’s most influential British band. Released on September 10, the new 12-disc set was conceived and compiled by The Clash. Also available is a new 2-disc compilation The Clash – Hits Back , as well as The Clash 5 Studio-Album Set, which collects the band’s original five studio albums on CD. On October 15, remastered vinyl editions of the band’s five studio albums were made available.

The Clash: The Last Gang in Town from Fred Armisen