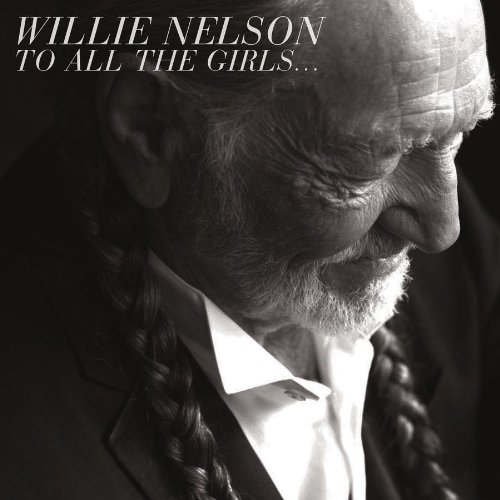 Legacy Recordings, the catalog division of Sony Music Entertainment, will release the new Willie Nelson album, To All The Girls…, on Tuesday, September 24, 2013.

A collection of newly recorded duets between American musical legend Willie Nelson and a dream list of contemporary pop-country women singers, To All The Girls… was recorded mainly in Nashville.

The artist’s third full-length album of new music to be released in a mere 16 months, To All The Girls… celebrates Willie’s 80th birthday year with a selection of profoundly moving and heartfelt performances of classic songs from America’s country, pop and gospel repertoire and more.

To All The Girls…

14.  Lily Meola – Will You Remember Mine

17.  Paula Nelson – Have You Ever Seen The Rain

The second new album release in the artist’s 80th birthday year, To All The Girls… is the third new Willie Nelson album since his historic deal with Legacy Recordings was announced in February 2012.

Heroes, his first for Legacy, was released May 2012, debuted at #18 on the Billboard 200 best-selling albums chart (Willie’s highest number on the chart since Always On My Mind hit #2 in 1982) and spent five consecutive weeks at #1 on the Americana Radio Chart.

Let’s Face The Music And Dance, Willie’s second Legacy album, was released on April 16, 2013 (two weeks before Willie’s 80th birthday on April 30). Comprised of a range of pop, rock, jazz and country classics chosen by Nelson, Let’s Face The Music And Dance was praised by critics, peaking at #16 on the Billboard Top Country Music Albums chart and #49 on the Billboard 200.

The album celebrates Willie’s more-than-forty years on the road and in the studio with Family, the band he formed with his sister, Bobbie Nelson (on piano), drummer Paul English and harmonica shaman Mickey Raphael–their name taken from his 1971 studio album Willie Nelson & Family. Rounding out the Family line-up on Let’s Face The Music And Dance are Billy English (Paul’s brother) on electric gut string and snare drum, Kevin Smith on upright bass and Jim “Moose” Brown on B-3 organ with Willie’s son, Micah Nelson, adding percussion on select tracks. Willie Nelson and his guitar, Trigger, appear on all the songs.

2013 is a banner year for the pop country patriarch who, in addition to releasing three essential new albums in 16 months, penned a rollicking memoir, “Roll Me Up and Smoke Me When I Die – Musings from the Road” (published by HarperCollins in May 2012) which hit the New York Times bestselling non-fiction list.

Willie Nelson’s deal with Legacy marks a label homecoming for the artist, who, from 1975-1993, cut a phenomenal string of top-selling singles and albums for Columbia Records, beginning with 1975’s seminal smash Red Headed Stranger.

“I’m really happy to be back home with Sony Music,” said Willie Nelson at the signing. “We have been partners for many years; all the way back to Pamper Music and Tree Music. We share a great history, and I’m looking forward to many more years together.”

Forthcoming Willie Nelson titles under the Legacy imprint will include newly recorded songs and performances as well as archival releases, personally curated by the artist, drawn from all phases of his career including his recordings for RCA Records and others.

As curator of his catalog, Willie will work with label archivists to select recordings, including previously released and previously unreleased tracks, for release in newly compiled collections and as bonus material on new editions of existing titles. The newly curated Willie Nelson titles will provide fresh perspective and context to the artist’s profoundly influential and successful career.

With a six-decade career and a catalog of more than 200 albums to his credit, the iconic Texas singer-songwriter Willie Nelson has earned a permanent position in pop music’s pantheon with songs that combine the sophistication of Tin Pan Alley with the rough-and-tumble grit and emotional honesty of country music. He brought pop and country together on the radio in the early 1960s with unforgettable songs like “Crazy” (Patsy Cline), “Hello Walls” (Faron Young), “Funny How Time Slips Away” (Billy Walker), “Night Life” (Ray Price) and others and, by the mid-1970s, had become a superstar in his own right as a prime mover of a revolutionary and thriving outlaw country music scene. The Red Headed Stranger, Willie’s first album for Columbia Records in 1975, catapulted the artist to the front ranks of popularity, making his a name familiar in country and city households across America and around-the-world.

A seven-time Grammy Award winner, Willie Nelson has received numerous accolades including American Music Awards, Academy of Country Music Awards, Country Music Association Awards and others. He is a co-founder of Farm Aid, an annual series of fundraising events which began as an all-star benefit concert in 1985 to raise money for American family farmers. He continues to lobby against horse slaughter and produces his own blend of biodiesel fuel. An old-school road-dog troubadour with new school wheels, Willie plays concerts year-round, tirelessly touring on Honeysuckle Rose III (he rode his first two buses into the ground), taking his music and fans to places that are always worth the ride.