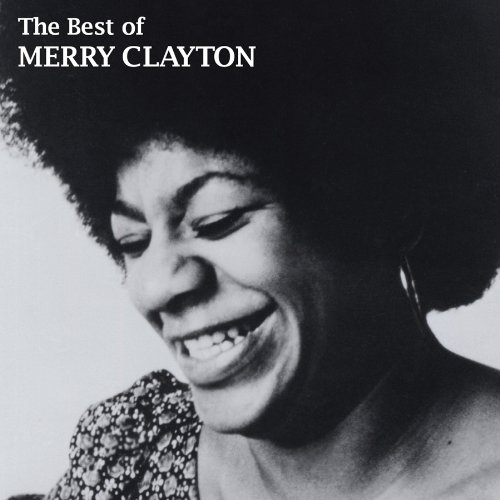 First compilation of her work ever issued comprises 17 tracks from the singer’s Ode Records years, as compiled by producer Lou Adler,

including every chart single and 11 album cuts

Coincides with June theatrical release of 20 Feet From Stardom, documentary film on backup singers featuring Clayton, Darlene Love, and others, with soundtrack on Columbia Records, to be released June 18th

The musical career of Merry Clayton, renowned backing singer turned solo headliner, is celebrated on The Best Of Merry Clayton, available everywhere June 25th through Ode Records/Legacy, a division of Sony Music Entertainment.  The first compilation ever issued on the artist, the album’s 17 tracks, which include every one of her five Billboard Hot 100 chart singles on Ode Records, serve as a reminder of the touchstones of her career.  The range of artists with whom Clayton has sung includes everyone from Ray Charles and Elvis Presley to the Rolling Stones, from Billy Preston and Carole King to Joe Cocker and Leon Russell, from Lynyrd Skynyrd and Ringo Starr to Taj Mahal and Neil Young, and scores more.

The release of The Best Of Merry Clayton coincides with June theatrical openings of 20 Feet From Stardom in select cities.  Award-winning director Morgan Neville’s new film features Clayton, Darlene Love, and others, documenting the untold true story of the backup singers behind some of the greatest musical legends of the modern era.  The soundtrack album to 20 Feet From Stardom, with classic rock and R&B tracks by (or featuring) Clayton, Love, Lisa Fischer, Táta Vega, Claudia Lennear, and others, will be available June 18th from Columbia Records.

After nearly a decade behind the scenes, Merry Clayton became an “overnight” star in December 1969, when she was cast as Mick Jagger’s vocal collaborator in “Gimme Shelter,” the opening track of the Rolling Stones’ album, Let It Bleed.  The raging urgency of her vocal (“War, children, yeah, it’s just a shot away/ It’s just a shot away”) capsulated the turmoil of the times.  Clayton was signed by Rock And Roll Hall Of Fame producer Lou Adler to his Ode Records label, and her debut solo LP was issued the following year.

The album was titled Gimme Shelter and was the first of three soul-drenched LPs that Clayton recorded for Ode, all of them packed with covers of contemporary rock, pop, R&B, gospel, and more.  Gimme Shelter was followed by the self-titled Merry Clayton (1971, produced by Adler), and Keep Your Eye On The Sparrow (1975, produced by Gene McDaniels).  Adler and Legacy reissue producer Rob Santos have sourced the majority of the 17 tracks on The Best Of Merry Clayton from her three Ode albums:

Two of the tracks on The Best Of Merry Clayton are taken from a rare non-LP single issued between albums in 1972.  The A-side was Goffin & King’s “Oh No, Not My Baby,” first introduced by Maxine Brown in 1964, and a pop staple ever since.  Clayton’s version earned her a Grammy Award® nomination for Best Female R&B Vocal in 1972.  The B-side was Elvis Presley’s “Suspicious Minds” (written by Mark James), suggesting that Clayton may have been among the backing singers at Presley’s American Studios sessions in Memphis of January-February 1969, when he first recorded the song.

Three of the tracks on The Best Of Merry Clayton are LP rarities that not only show off her versatility, but also indicate the wide-ranging, eclectic nature of Lou Adler’s Ode Records label.  Bob Dylan’s “The Mighty Quinn” is from a 1969 album, Dylan’s Gospel, in which ten of his folk and rock songs were given grand gospel treatments, as recorded by the Brothers and Sisters.  This gathering of some two dozen voices not only included Clayton, but such female gospel and R&B luminaries as Patrice Holloway, Gloria Jones, Clydie King, Julia Tillman, Edna Wright, and others.  The album was produced and directed by Lou Adler, and arranged and conducted by Gene Page.

The enigmatic movie soundtrack for MGM’s Brewster McCloud  (1970) featured one side of tracks mainly written and performed by John Phillips, fresh from the Mamas & the Papas.  Three of these featured Clayton, but it is generally agreed that the version of “Lift Ev’ry Voice And Sing (Black National Hymn)” is one of the most stirring versions of that anthem ever recorded.  Again, this track was produced by Lou Adler, and arranged by Gene Page.

The final track on The Best Of Merry Clayton is her climactic take as “The Acid Queen” from the Who’s rock opera, Tommy.  In this case, it was the all-star 1972 version that was recorded with the London Symphony Orchestra and London Chamber Choir conducted by David Measham, featuring singers Steve Winwood, Rod Stewart, Richie Havens, Ringo Starr, and others.  For decades, pundits have debated Clayton’s “Acid Queen” vis-à-vis Tina Turner’s interpretation in the 1975 film version of Tommy.

Born in New Orleans on Christmas Day, 1948 (hence “Merry”), pop history notes that Clayton’s first major session took place at age 13 in 1962.  The occasion was a duet with Bobby Darin on “Who Can I Count On? (When I Can’t Count On You)” from his album, You’re The Reason I’m Living (released 1963).  She was still a teenager when she started as one of Ray Charles’ backing singers in the Raelettes in the 1960s.  By the mid-’60s, Clayton had emerged as a first-call voice onstage and on hundreds of recordings that bore her name in the credits (and hundreds, perhaps thousands more that didn’t credit her).  Her presence on the Stones’ “Gimme Shelter” propelled her to a new level of stardom, and she found a home with Ode Records and Lou Adler.

Liner notes for The Best Of Merry Clayton are written by former Del Fuegos member, and now college professor Dr. Warren Zanes, whose credits include notes on historic packages by George Harrison and Dusty Springfield.  Discussing the world of backing singers, he writes, “They’ve been able to enter into the widest range of musical situations and do what’s needed.  Many backing singers adapt chameleon-like to the situation and never develop a distinctive ‘character’ voice.  But there are certainly exceptions.  And Merry Clayton is one of them.  She is gifted with a voice that gives her a place in both worlds.  Here is a singer who can do it all.”

The Best Of Merry Clayton