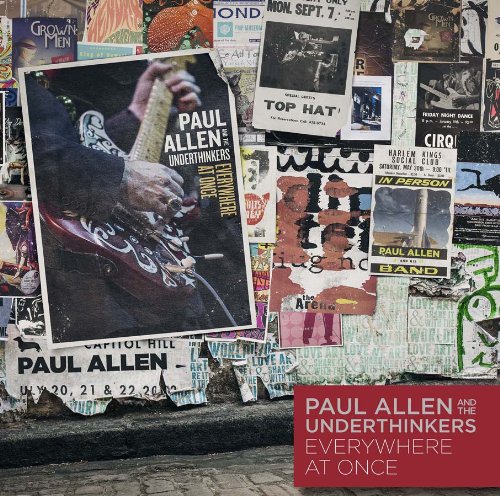 PAUL ALLEN AND THE UNDERTHINKERS MAKE MAJOR LABEL DEBUT ALONGSIDE AN ALL-STAR LINEUP OF COLLABORATORS, INCLUDING

Renowned philanthropist, Microsoft co-founder, and music veteran Paul Allen and his hard-working band the Underthinkers have completed their first album and major label debut, Paul Allen and The Underthinkers’ Everywhere At Once. The all-star, 13-song program of blues-based guitar rock nuggets, featuring contributions from guests Ann and Nancy Wilson of Heart, Chrissie Hynde, Joe Walsh, Derek Trucks, Doyle Bramhall II, David Hidalgo of Los Lobos, Ivan Neville, and others will be available everywhere August 6, 2013 through Legacy Recordings, a division of Sony Music Entertainment.  Proceeds from sales of the album will go to fund educational programs at the charitable organization EMP Museum.

A rock songwriter and guitarist since his teens, Allen plays electric guitar on “Straw Into Gold” (which features Ann and Nancy Wilson), “Six Strings From Hell” (which features Joe Walsh on vocals and slide guitar), and “Pictures Of a Dream.”  He also takes the guitar solos on “Down Low” and “Big Blue Raindrops.”

Other guest appearances include Chrissie Hynde singing lead on “Rodeo,” singer/songwriter/guitarist Doyle Bramhall II singing lead on “Cherries Fall,” and Ivan Neville sharing vocal duties with Wendy Moten on “Inside Out” and “Restless.” “Inside Out” and “Healing Hands” feature guitar solos by Derek Trucks.  David Hidalgo plays guitar on all the tracks except “Straw Into Gold” and “Six Strings From Hell.”

All but two tracks on Everywhere At Once were produced by Doyle Bramhall II and Justin Stanley.

The public got their first taste of the album when the single track “Divine” (featuring lead vocals by studio ace Amy Keys) was heard in the 2012 Warner Bros. blockbuster Magic Mike, starring Channing Tatum and Matthew McConaughey.

Allen either wrote or co-wrote every track on Everywhere At Once.  “Inside Out” is the lone solo composition.  Every other track was co-written with either Doyle Bramhall II, Ty Baillie, or Underthinkers bandmates John Bohlinger (guitar), Doug Barnett (bass guitar) and Tim Pike (vocals).

Everywhere At Once came to the attention of Legacy Recordings via the company’s longtime relationship with Seattle-based rock legends Heart, whose Ann and Nancy Wilson feature on the album.

Legacy also has a strong association with Paul Allen through the music of his primal influence, Jimi Hendrix.  Nearly all of Jimi’s catalog of released and unreleased music is now handled by Legacy, the result of a pact signed in 2009 with the Seattle-based, family-run Experience Hendrix LLC.  Allen’s first concert was seeing Hendrix at the Seattle Center Coliseum in 1969, and he saw him again the following year at Sicks Stadium, also in Seattle.  Three decades later in 2000, the doors opened to Seattle’s EMP Museum, founded by Allen and designed by architect Frank Gehry.  The museum pays tribute to Hendrix, whose music has been the subject of numerous permanent and temporary exhibits at the EMP Museum over the years.

In his New York Times best-selling memoir Idea Man, Paul Allen was unequivocal in the emphasis he placed in his life on the role of playing music.  “I’ve rarely gone a week without picking up a guitar,” he wrote.  “It’s more than a hobby; it gives me balance and keeps me in the moment, which can be a challenge with all the projects I’m pursuing at any one time… I take music with me wherever I go.”

Born and raised in Seattle, he started on violin in second grade and played the instrument through the sixth grade.  But after he received his first guitar at age 16, and saw Jimi Hendrix for the first time later that same year, there was no looking back.  Prior to the Underthinkers and Everywhere At Once, he formed the band known as Grown Men in 1996 and they independently released an album in 2000.

Over the years, Paul Allen has been privileged to play and jam alongside a Who’s Who of rock and blues royalty, encompassing the likes of Mick Jagger, Buddy Guy, Carlos Santana, Bono and the Edge, Robbie Robertson, Ron Wood, Joe Walsh, Peter Gabriel, Chrissie Hynde, Dave Grohl, Cyndi Lauper, Jon Bon Jovi, Axl Rose, Dave Stewart, Johnny Lang, Billy Cox, Cindy Blackman, Derek Trucks, Susan Tedeschi, Vernon Reid, The Blues Brothers, Spinal Tap,  and many others.  “For someone like me,” he wrote, “who tilts toward the analytical, jamming taps into my creative, intuitive, more emotional side.”

“I’m still moved by the power of live music,” Paul Allen summed up in his book, “and I seek it out every chance I get.”

Paul G. Allen is a leading philanthropist and technologist who co-founded Microsoft in 1975.  Allen was the company’s chief technologist until he left in 1983.  Today he continues the search for knowledge that led to the creation of Microsoft and he has become one of the most generous and best-known philanthropists in America.  He supports and advances world-class projects and high-impact initiatives that improve the way people live, learn, work and experience the world through arts, science, education, entertainment, sports, business and technology.  With lifetime giving of more than $1.5 billion, he gives back to the community through the Paul G. Allen Family Foundation and through direct gifts.  Allen is founder and chairman of Vulcan Inc., the company that oversees his business and philanthropic activities.

In 2003, Paul Allen created the Allen Institute for Brain Science to accelerate understanding of the human brain in health and disease. With a commitment of $500 million to date, Allen supports the Seattle-based nonprofit’s large-scale research initiatives that fuel discovery throughout the scientific community.

Everywhere At Once by Paul Allen And The Underthinkers